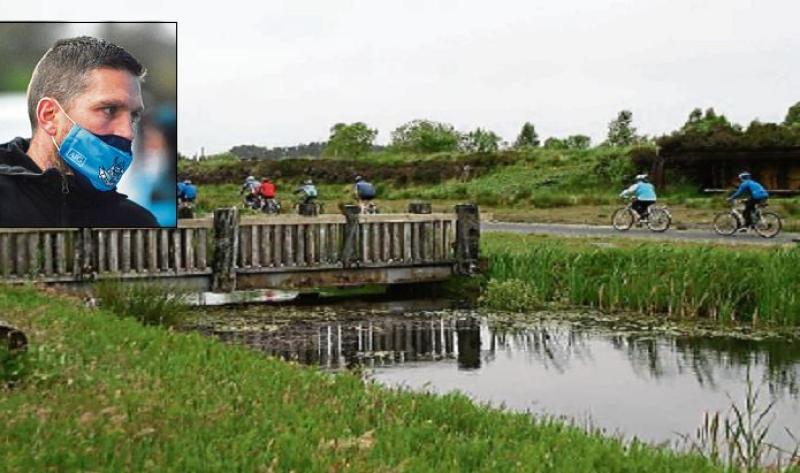 A COMPANY run by Dublin hurling and football star Conal Keaney has won the contract to run the bike hire service at Lough Boora.

The decision by Bord na Mona to select the Dublin company at the expense of local man Pat Barrett has sparked outrage around Offaly.

Pat Barrett, a resident of Lumcloon, had been running the bike hire business at Lough Boora Discovery Park for 11 years but learned last week that his tender to continue in operation had not been successful.

The Tullamore Tribune understands that Mr Barrett's was one of three businesses who applied when Bord na Mona put the operation out for tender earlier this year.

He is understood to have done his best to comply with the criteria set by Bord na Mona but the contract was awarded to Mr Keaney's firm, which runs a bicycle hire service for the Phoenix Park in Dublin.

TAP TO READ NEXT

Mr Barrett told the Tribune he was reluctant to speak in public at this time but he posted a comment on the Lough Boora Rent-a-Bike Facebook page saying he believed he was “never going to get” the contract once it went to tender and “so much for trying to keep jobs locally”.

A campaign began immediately for the energy company to reverse its decision and Offaly's two Dail deputies, Barry Cowen, Fianna Fail, and Carol Nolan, Independent, both challenged Bord na Mona at the weekend.

Political representatives in Offaly have indicated they believe Bord na Mona's selection of a business located outside the county for its flagship tourism site flies in the face of the so-called 'just transition' from peat.

The development comes just after a furious row over the ongoing importation of peat briquettes at a time when Bord na Mona is winding down its briquette factory in Derrinlough, where Mr Barrett is still employed.

Deputy Cowen said he is seeking an urgent meeting with Bord Na Mona to discuss the fallout.

Deputy Cowen said he offered his “unwavering support” to Mr Barrett, adding, “the contribution of Pat’s business to the success of the Lough Boora Parkland cannot be underestimated.”

“Pat’s business first started attracting visitors to the parkland and his professionalism, huge knowledge of the facility, its history and its significance to the locality meant that they returned time and time again.”

The TD criticised the award of the tender to a large bike rental company. “This is not in the spirit of supporting local business and a just transition. If we are serious about rural Ireland and rural communities, we must support our small local enterprise.

“I contacted Pat over the weekend and we agreed to remain in contact in our efforts to seek rectification. We are all shocked, dismayed, bemused and angered by such a decision or process that could do this.”

Deputy Cowen added: “I will contact the Bord Na Mona authorities immediately to voice my disbelief and shock while questioning whether tender procedures were properly enforced and if appropriate weight was given to Pat’s long years of service, local knowledge and the dedication, commitment and love he has shown to building up Lough Boora Parklands as a destination. I truly believe that Pat’s business is the best fit for the area and will urge them to reconsider.”

Deputy Nolan said she was very disappointed to hear of the latest move by Bord na Mona in relation to a business built up over 11 years through hard work, dedication and commitment by Pat Barrett.

“It doesn’t seem right or fair that Pat didn’t get an opportunity to continue doing the great work he did over a period of 11 years,” she commented.

"I can honestly say as a mother who brought my children to Lough Boora to cycle when they were small, Pat was professional, polite and always had a great way about him. The kids always remembered Pat’s kindness and, of course, the free can of Fanta or Coke that they got when they left their bicycles back to the shed.

“My kids, just like many, many others in our county and beyond still hold fond memories of Pat years later. This latest move by Bord na Mona has angered people and has caused much frustration and hurt in our community which is currently undergoing a so-called ‘Just Transition,’ a process that has created no jobs to date. It would appear that decent, hard working local people are not part of Bord na Mona’s transition or indeed any future plans.

“I have contacted Pat over the weekend and will be taking this matter up directly with Bord na Mona to check whether the tendering process was followed correctly and even if it was followed legally. It most certainly wasn’t followed morally or decently. Many of us in this community will not accept the despicable behaviour of Bord na Mona which has stooped to a new low.”

Bord na Mona and Conal Keaney had not responded to requests for comment by Tuesday evening.