OPINION: Championship will define 2021 season for Offaly hurlers and footballers 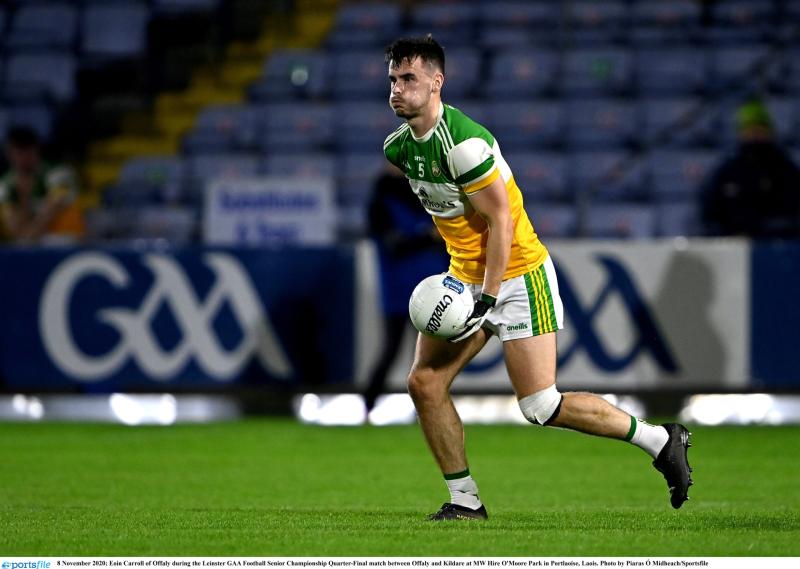 THE championship will very much define the season for Offaly senior footballers and hurlers, especially the hurlers who face four counties from a higher championship grade in a very tough league programme.

Both squads started back training last week and will be trying to get in quality work this week as the countdown continues to the National Football and Hurling Leagues.

Offaly are in a three team group in the National Football League Division 3 South. They are away to Wicklow on May 15, at home to Limerick on May 22 and at home to Tipperary on May 29. They play Louth in the first round of the Leinster Senior Football Championship with a quarter-final against Kildare awaiting the winners.

Offaly are in Division 2A of the National Hurling League. It is a tough division for them as they face four Joe McDonagh Cup teams in Meath (May 9), Kerry (May 16), Carlow (May 23) and Down (June 6). Wicklow are the only side from their championship grade, the Christy Ring Cuop and they face them in their final game on June 13.

In the the Christy Ring Cup, Offaly have been drawn in the two county group along with Sligo. Wicklow, Roscommon and Derry are in group A. The winners of Offaly and Sligo will play one of the top two teams in group A in the semi-final while the loser will play the third team in a quarter-final.

There is absolutely nothing attractive about the Christy Ring Cup group format. While second chances is very much an accepted part of the GAA now and won't change any time soon, there really is nothing at stake in the opening games. It is only from the quarter-final that we will see anything with the cut and thrust that we expect from championship fare.

For Michael Fennelly and Offaly hurlers, it really is all about the championship this year. They were devastated when they lost a penalty shootout to Down in the Christy Ring Cup semi-final last year. With the two finalists promoted to the Joe McDonagh Cup last year, this was Offaly's biggest game of the year and while they were unlucky to lose and had a genuine Eoghan Cahill penalty goal ruled out in normal time, the overall performance showed just why Offaly were in the Christy Ring Cup – Cahill's penalty hit the back woodwork but was not awarded by the umpires.

It was Michael Fennelly's first year in charge and with Covid-19 restrictions playing havoc with the season – that Down game was played in the middle of November -, it was only fair that the management and team were given the benefit of the doubt.

However, patience may not be as plentiful this year if Offaly don't manage to get promotion. It was refreshing to talk to Michael Fennelly last week and here him taking a long term view on the year. The Kilkenny hero will be fully aware of what could happen him if Offaly stay in the Christy Ring Cup for a third season but he is very much focussed on the longer term future of Offaly hurling and building a team. A lot of new players have been introduced to the 36 strong panel and Fennelly stated that he is focused on a 3-5 year plan for Offaly hurling and developing young players fully.

That is good to hear but at the same time, the expectation that Offaly should still be able to get out of the Christy Ring Cup is a reasonable one. It will be Offaly's big focus for this season.

It is possible that Offaly will do well in the National Hurling League but such a belief is based on past memories rather than current reality. The truth is that Offaly no longer occupy the same planet that they did in the 1980s and 1990s. They have declined dramatically from 2000 onwards and it has really gathered pace in recent years. Relegation to hurling's third tier was no accident and results don't lie. Failure to win the Christy Ring Cup last year proved beyond all doubt that Offaly were there on merit.

The league will give some indication of where Offaly are going but they deserve to be given plenty of leeway in this. Offaly have lost to Kerry, Carlow and Down in the past couple of years and were very fortunate to beat Meath in the league last year. With so many young players and a need to try out things ahead of the championship, the odds are stacked against Offaly getting promotion.

It can't be ruled out but Offaly need to give young players their head, see what they are made of, where improvements can be made and who has the capacity to make these adjustments. As galling as it may seem to older hurling fans who retain vivid memories of the glory days, you couldn't put much money on Offaly amassing the points tally they will need to do to win promotion.

The championship, however, is a different story. With Down and Kildare gone up, Offaly will be warm favourites to win the Christy Ring Cup. They can't take anything for granted at the moment and the knockout games will be riddled with anxiety for them but if Offaly can't get out of a grade that includes Sligo, Wicklow, Roscommon and Derry, it will not be good.

The footballers are in a different situation as they have a decent outside chance of promotion in the league and they almost certainly can't win a Leinster championship that has been dominated by Dublin for so long now.

With two teams from each north and south division going into the Division 3 league semi-finals, Offaly have a good chance of making them. They will definitely be capable of beating Wicklow and Limerick, and will be favourites to win those two. They will be underdogs against Munster champions, Tipperary but that game is in Tullamore and Offaly will always have a chance there. Promotion is an outside chance for Offaly but it is possible and they will be going all out in the league.

Unless they win promotion, Offaly's season will be defined by the championship opener against Louth. With Tyrone legend Mickey Harte at the helm in Louth, it will be no walk in the park for Offaly. Louth may be down in Division 4 now but you would expect that Harte will have them surpremely fit and Offaly will have their work cut out against them. They do, however, need to win this game and see how they perform against Kildare as John Maughan aims to make further progress with a hard working and honest side.

The league will be treated very differently by the footballers and hurlers in terms of the way they experiment. It is a very condensed programme for both counties – the footballers play their three group games in successive weeks while the hurlers play five weekends out of six. It is a gruelling schedule which means that there will be little opportunity to do really heavy training – it will be basically match, recovery, match and this will quickly lead into the championship.

For the footballers, who have their sights set on a semi-final place, every match is a must win one and they will be putting their best foot forward. They also have more established players on their panel and while they will be eager to try out newcomers, they will be able to balance this a bit easier than the hurlers.

Michael Fennelly and company simply must give some of the newcomers a chance in the league – they need the players to learn and they also need to learn about the new players. While Offaly will be trying to win every game, they will be treating the league as bonus territory and the emphasis will be on giving players experience rather than putting their strongest team out every day.