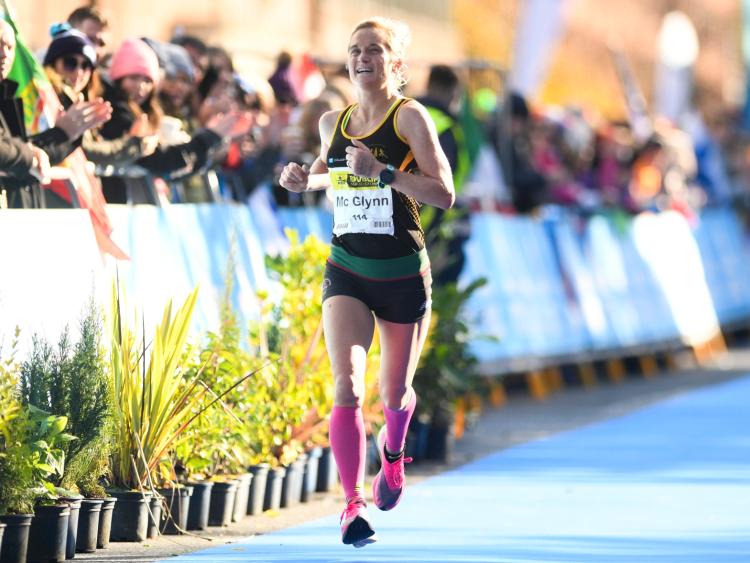 Ann Marie McGlynn, so near and yet so far in the Cheshire elite marathon.

“I AM gutted beyond belief but very grateful to cross the line in 2.29.34, albeit four seconds short of the qualifying time for Tokyo Olympics,” reflected Ann Marie McGlynn on Tuesday morning as she came to terms with Sunday's agonising near miss.

The Mucklagh native ran a sensational personal best at the Cheshire elite marathon in Wrexham to finish third woman and just four seconds outside the 2.29.30 qualifying time for the Tokyo Olympics.

It was a magnificent performance, full of character and guts, for McGlynn, a three minute plus improvement on her previous time but she was left devastated after going so close. She hadn't raced to potential in her previous attempt in Valencia late last year but she answered all doubts quite spectacularly on Sunday and was within touching distance of the Olympics.

The Strabane, Tyrone resident has been chasing down the Olympic qualifying time for the past couple of years and it now looks like her Olympic dream is over for this year at least.

The Copenhagen marathon in Denmark was the last avenue to get the time before the end of May deadline but it was cancelled on Monday evening. In a statement, the organisers stated that they had hoped to run the marathon with a modified race set up but couldn't wait any longer for the “political processing and final approvals” from Danish Government authorities, leaving them no choice but to cancel the event.

Even if the Copenhagen marathon had went ahead as fixed on May 16, it would have been very difficult for McGlynn to recover sufficiently from the heroic attempt she made on Sunday to achieve the qualifying time and to take it on.

She posted on her social media accounts: “I have to be honest in saying that Sunday was bittersweet for me, a day where I ran the race of my life but a day where I came up 4 seconds short to get to the Olympics, something I’ve dreamt of as a young girl.”

The world ranking quota system could provide a back door entry for McGlynn to Tokyo, which is scheduled to begin in July, but most observers believe this is now very much a long shot as more than the maximum field of 80 athletes have already achieved qualifying times.

The ranking list is a complicated formula and is designed to achieve 50 percent of competitors in each event through qualification standards and the remaining 50 percent through the World Athletics ranking system.

Each country is limited to three athletes in the marathon, which means that McGlynn will move well up the list for Olympic qualification past many faster athletes – for example several Kenyans and Ethiopians have ran sub 2.20 but won't be going to Tokyo as they are not in the top three in their country and others such as Japan, USA and more will have a few athletes inside the qualifying standard.

However, the World Athletics website on Tuesday was updated to include the Cheshire marathon results and it shows that 90 athletes have met the qualifying standard for Tokyo – this limits each country to three competitors. A further five have qualified by their performance in a number of designated marathons and the odds are now stacked against the brilliant Offaly athlete making the Games.