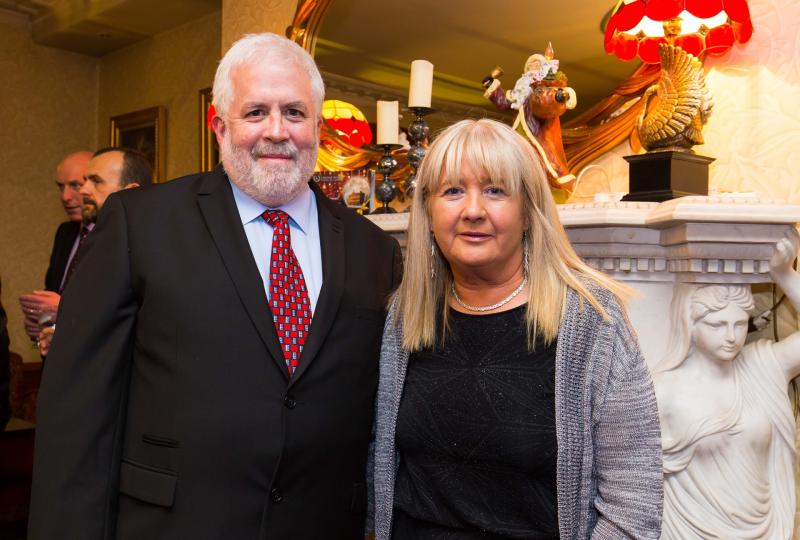 John Cronin and his wife Dympna.

LOOKING back on his subsequent progress up the Irish, and indeed world, athletics ladder, it is hard to believe that John Cronin was not elected in his first attempt to get involved at committee level in the Tullamore Harriers. The Tullamore resident will be elected unopposed as president of Athletics Ireland at Congress on Saturday and he hopes serve the permitted two terms of two years each.

A fine 800 metre runner in his youth, Cronin took up running in his native Donegal, winning the national U-16 800 metre title in 1976. He continued his athletics career in UCG in the late 1970s and competed in Tullamore in the Quinlan Cup while a member there.

He arrived in Tullamore in 1983 to work in the then Burlington Industries, off the Clara road. He spent a brief period in the USA for work, returning to his new home at the start of 1984, and given his passion for athletics, it was only natural that he gravitated towards the Tullamore Harriers.

His initial ambitions to get involved, however, did not meet success as he was beaten in a vote for a place on the committee, losing out on the casting vote of the chairman for the final place at the 1984 Annual General Meeting.

Undeterred, he remained a dedicated worker for his new club and at the 1986 Annual General Meeting, he replaced Noel Brennan as the PRO. It was the start of decades of tremendous involvement and dedication.

In 1987, Seamus Rigney became the new PRO as Cronin stepped into a new role as the mens’ captain. He did his first stint as chairman in 1988, serving one year and he was replaced by Mick Gillespie in 1989, moving onto the committee. With Gillespie as chairman, Cronin continued to serve diligently at committee level in the 1990s until 1997 when he replaced the Garda Detective as chairman.

It was the start of a remarkable continuous 21 years as chairman until his growing involvement and ambitions at national and international level saw him take the understandable decision to step down at the 2018 Annual General Meeting, when he was replaced by Adrian Curley.

Cronin was chairman of the Harriers during a period of unprecedented and unforeseen growth. As running became increasingly popular, the membership of the Tullamore Harriers spiralled at both adult and juvenile level. It mushroomed into the hundreds and this created its own challenges.

The club transitioned from one with a small but very competitive membership base to one with a big membership but a lot with more basic get fit-well being motives – albeit with a lot of very dedicated runners, training hard to bring their times down and being the best that they could be. It went from one where there was big emphasis on track and competing in leagues to one with a big body of members more focused on long distance road running, from 10k to marathon, and even beyond that in some cases.

Balancing the needs of these often conflicting goals was no simple task while Cronin was chairman. A very astute individual, he was an efficient and capable chairman with a great knowledge of athletics and its most intricate rules.

Early in his second spell as chairman, it became clear that his ambitions lay far beyond club level. He was elected onto the Management Committee of BLE at their Convention in 1998 while he was the manager of the Irish team for an international meeting in Latvia in 1999.

In 2015, he made a major breakthrough when he was elected to the Technical Committee of the International Association of Athletics Federation (IAAF) in 2015 – the international body has since changed its name to World Athletics. As England running legend Seb Coe became the new president of the ruling body for international athletics, Cronin’s success was a hugely notable one. On a vote, he finished eight in a field of thirty candidates for the twelve positions up for grabs and this brought him into a different orbit – making him eligible to officiate at the biggest events in the world, up to the Olympic Games. This is an accolade that he may achieve in the future, once he has “served his time” in other events. He is only the fourth Irish person to serve on an IAAF committee.

The Technical Committee oversees IAAF rules and regulations - they have responsibility for competition rules, stadiums and facilities, equipment including technology and implements, and official's education for the IAAF. They have the power to put forward proposals to the IAAF Council, from where they may be referred to Congress, if necessary.

In 2016, he took another massive step forward when he was elected as the deputy president of Athletics Ireland at their Congress which was held in the Tullamore Court Hotel that year.

With a large watching contingent from his club, it was a very satisfying afternoon for Cronin as he was first elected as chairman of the Athletics Ireland high powered competitions committee. John and the other committee chairpersons, John McGrath (juvenile), Brid Golden (high performance), Eamon Harvey (coaching and development) and George Maybury (finance and risk) were all eligible to go for deputy president but the Donegal native was the only person who allowed his name go forward.

With such national and international commitments, his club fully understood his decision to end his tenure as chairman and they have been fiercely proud of his advancement to such high level.

Since then, he has progressed further and will serve on the Jury of Appeal at the Tokyo Olympics later this year, if they proceed as planned. Covid-19 has greatly disrupted the sporting world and he would have worked at these if they went ahead as fixed last year. The crisis saw his second two year term as deputy president extended to three and his term on the World Athletics technical committee has now been extended to the end of 2022. He has also been appointed as technical delegate for the European Championships in Munich in 2022.

It was always his intention to contest the position of president of Athletics Ireland after Georgina Drumm’s term ends and now that he has achieved this ambition, who knows where the road will end for him – it could very well be a very long road!!!

This profile first appeared in the history book of Tullamore Harriers Athletics Club in 2018 and has been amended slightly.