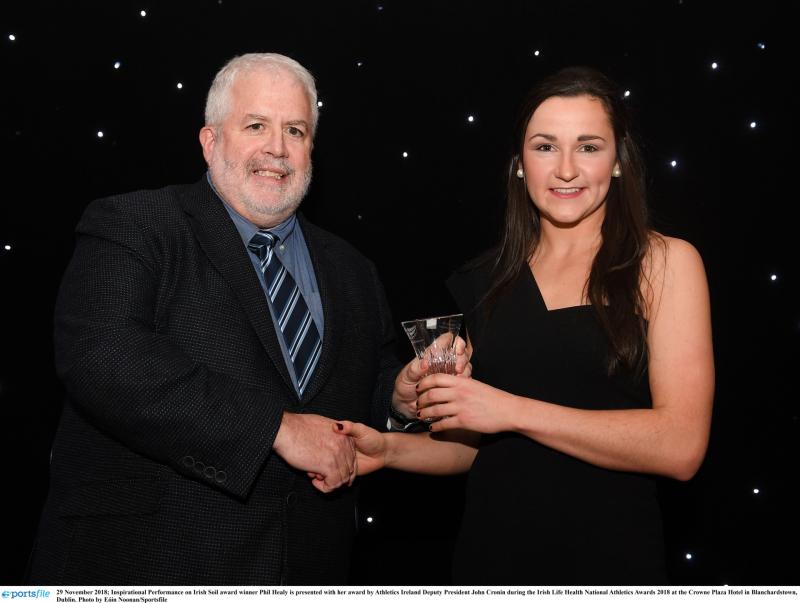 LONG time Tullamore resident John Cronin will take over the most powerful position in Irish athletics when he is elected as president of Athletics Ireland next Saturday.

Cronin will be elected unopposed, replacing Georgina Drumm who had been elected as president an annual Congress in the Tullamore Court Hotel in 2016. The Louth woman beat Ray Flynn on the same day that John Cronin was elected as chair of competition and deputy president.

A native of Donegal, Cronin moved to Tullamore in 1983 to take up employment with the former Burlington Industries. A talented mid distance runner in his youth and the national U-16 800m champion in 1976, he has given a life time of service to athletics, serving in a variety of roles from local to international level.

He has given decades of devoted commitment to Tullamore Harriers' Athletics Club. Serving initially as PRO in 1986, he became their mens' captain in 1987, was on committee for several years and has done two stints as chairman – one year in 1988 and then twenty one years contiunous from 1997 until 2018 when his growing national and international commitments resulted in his stepping away.

During his term as chairman, Tullamore Harriers grew from a club with a small but excellent running membership to the mass participation one that it currently is, attracting hundreds of juvenile and adult members from the greater Tullamore area.

Cronin is a real rules expert and has served on several important committees as well as adjudicating at international level. He was appointed to the Jury of Appeal by the IAAF, now World Athletics, for the 2020 Olympics in Tokyo – Covid-19 resulted in them being cancelled and they are now scheduled to start on July 23. He will officiate at these if they go ahead – because of Covid, his term on the World Athletics technical committee has now been extended until the end of 2022 and he has also been appointed as technical delegate for the European Championships in Munich in '22.

His athletics CV is a hugely impressive one. In 1998, he was elected to the Management Committee of BLE and served as Irish manager at an international meeting in Latvia in 1999.

He became a European International Technical Official (ITO) in 2005, serving until 2013 and he has operated at world level since 2013

In 2015, he took a big step forward when he was elected to the Technical Committee of the International Association of Athletics Federation (IAAF) – he became only the fourth Irish person to serve on an IAAF committee.

The Technical Committee oversees World Athletics rules and regulations - they have responsibility for competition rules, stadiums and facilities, equipment including technology and implements, and official's education. Cronin is married to a Tuam native, Dympna O'Grady and lives on Tullamore's Daingean Road. Saturday's Congress will take place virtually and the fact that Cronin is now unopposed for the presidency demonstrates his vast popularity as well as the likelihood that he would have won any contest.

He had been also elected unopposed for his two terms as deputy president – they were supposed to be two years each but the second term turned into three years because of the Covid-19 crisis.

As deputy president and chair of competitions, he played a leading role in the National Championships being successfully staged last year and maintaining their long continuous run since the first was held in 1873. Getting those completed during Covid-19 limitations was a big logistical feat and took great organising. Similarly, he was heavily involved in the organisation of the Elite Micro Meet in the National Indoor Arena in February – an important meeting where athletes competed for European indoor quyalification as well as gathering world ranking points for those working towards the Tokyo Olympics.

He is allowed to serve two years as president of Athletics Ireland and hopes to do this. He will announce his plans for his term of office to delegates at Saturday's Congress.

See Tullamore and Midland Tribune on Wednesday for a full profile of John Cronin.