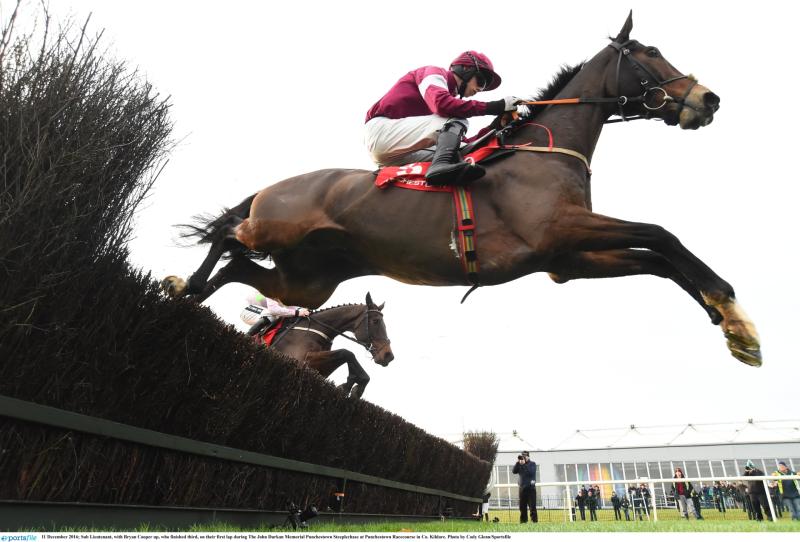 Sub Lieutenant in action in 2016

Aintree, much like Cheltenham, is diminished by the lack of atmosphere in the absence of spectators, but the Grand National remains an iconic race.

This year, as the horses leading round the elbow for home, there won't be a roar from the crowd but there will be millions willing them on from their sofas.

I'm backing three horses in this year's race and one of them is 100/1 and not without a chance. The Aintree Grand National takes places at 5.15pm on Saturday, April 10.

Much of the hype around the possible first female jockey to win this race will be around Rachael Blackmore and Minella Times this weekend and that is justified given her performances this season, particularly at Cheltenham. But the little known Tabitha Worsley could emerge as the story as she pilots the former Irish-trained SUB LIEUTENANT (100/1) on Saturday evening.

She rides the horse for her mother, Georgie Howell, who is the trainer and owner of this once classy horse. This horse hasn't won too often in his career but he has held his own in very good company. He's run three times at Cheltenham, finishing second behind Un De Sceaux in the 2017 Ryanair and fourth in the same race a year later. In 2019, he was pulled up in the Ryanair won by Frodon.

Tellingly, he has been around the National course before, finishing second to Cadmium in the 2019 Topham. In his last run in Ireland before leaving Henry De Bromhead and Gigginstown for life with Georgie Howell in the UK, Sub Lieutenant finished second behind The Storyteller over 2M 6F at Galway. He has run twice since, finishing fourth at Ascot on both occasions, once behind Mister Malarky and most recently behind Captain Chaos.

His jockey, Tabitha Worsley, has noted that his work at home has been exceptional, saying the further he goes, the better he gets. He's a solid jumper and hasn't ever taken a tumble on the racecourse. That's a big plus. In his day, this horse finished just two lengths behind Djakadam and Sizing John. Although that's a few years back now, he might still retain some of that class and has been handed a lovely low weight here.

Old-timers can go well around this course too; I'm thinking of the likes of Hello Bud in recent years. The ground drying out should be no problem with course officials likely to water it sufficiently for the safety of the horses, don't be surprised if this veteran 12-year-old gives you a serious run for your money. I can see Sunday's back page headlines already.....SUPER SUB!

VIEUX LION ROUGE at 50/1 is a strong eachway player. He has run in the Grand National four times and completed the course every time. His best showing so far was sixth behind One For Arthur in 2017. That's old form and I'll admit that, but if you look at his most recent run at Aintree in December, he beat Kimberlite Candy by 24 lengths in the Becher Chase over these fences.

He was held up and ridden very patiently on that occasion, albeit over a mile shorter than Saturday's test. The ground is going to be watered before the race but it is pretty much good ground with a bit of juice applied for safety reasons. That means it won't be as much of a slog as other years and with these more patient tactics, Vieux Lion Rouge could run into a place at least. He'll certainly give you a run for your money unless he runs into bad luck in-running.

He may find a few too good again but if I can get an eachway return from a 50/1 shot, I'll be very happy, especially with some bookies paying as many as eight places.

DISCORAMA (20/1) has a massive chance for Paul Nolan whose yard has come into form at just the right time. If you hadn't watched his most recent run at Cheltenham late last year, you would say this horse is admirably consistent. On that occasion, he finished tailed off behind Ramses De Teillee.

Prior to that, he was just touched off by a short head by Milan Native while giving him weight at Galway last October. He was third behind The Conditional in a mudfest renewal of the Ultima at the Cheltenham festival in 2020. He is very lightly raced and comes here fresh having not run at the Cheltenham Festival this year. He stays for days and if he can get into a handy rhythm in midfield and come lurking late on, he will see out the trip better than most.