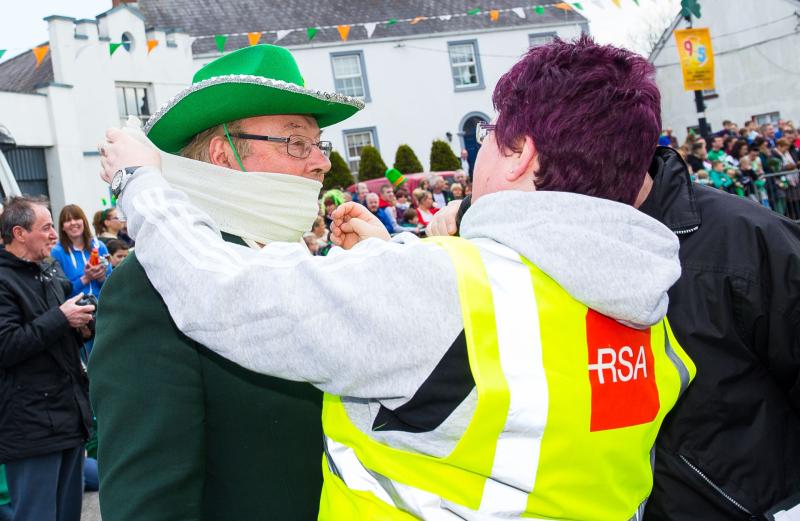 Medic Sandra Rock, the only woman ever to leave Bertie McMahon speechless as he was diagnosed with a case of Foot and Mouth disease at the 2016 parade in Clara.

“I have been receiving calls, letters and good wishes since the event,” said a delighted Bertie McMahon.

Bertie, who has organised the normal parade almost single-handedly in Clara for decades, decided to go down the virtual route when the event was cancelled due to the ongoing Covid restrictions.

He was overwhelmed with the response to his efforts and extended thanks to all who made it possible in particular Lloyd Bracken, Barry Flynn, Ricey Scully, Tony Berry, P.J. Ward, Kevin Lalor Fitzpatrick and the local media.
He also extended thanks to the “Little Town Media' social media platforms on which the virtual event was broadcast on Wednesday afternoon last.

The virtual parade was opened by Offaly football hero, Willie Bryan, who captained the county to its first senior football All-Ireland success in 1971.

This year is the 50th anniversary of that historic occasion.

Sport, music, fun, entertainment and great memories all featured in the parade.

Included were snippets from the 1993 parade as well as historic interviews by Barry Flynn and Ricey Scully.

There was also be a host of musical guests including a rare recording from 1963 of Michael and Rosie Mullen at the Fleadh Cheoil in Mullingar.

Irish dancers included the Celtic Blondes and Sarah Hennessy and the Streamstown Youth Dancers as well as Clara Youth Dancers.

The Ballinamere Dancers also featured as well as dancers from Castletowngeoghegan and the Ollie Conroy Dancers.

There was also a selection from Nora Carroll featuring Nigel Davey and Clara Dancers dancing in the convent in 1988.
Singers included Joe Reilly, accompanied by Martin Poland, Teresa Flynn and Pat Mullen, singing his own song about Clara and Davy Kavanagh.

Matt Fleming, Ferry Rock and Vin Dunne all featured from 1989 while there was also music from the Morinos. (See picture on page 15)

The national anthem was sung by Billy Digan.

To finish the show music by the Silver Spire Ceili Band from Mullingar was played along with dancing from the Ganley Dancers from Clara.