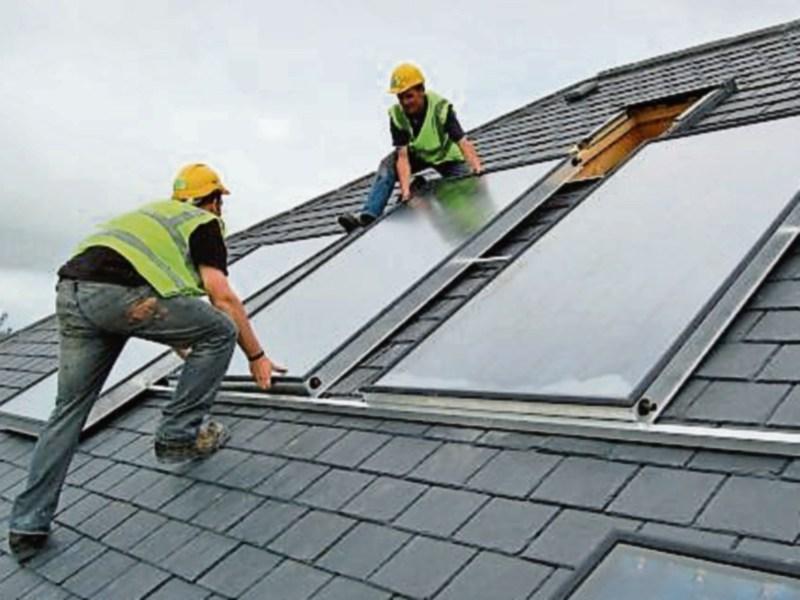 A number of councillors from the Edenderry Municipal District over a funding solution for a feasibility survey into retrofitting homes in the town.

There was an exchange at the March meeting of the Edenderry Municipal District Council between Cllrs Noel Cribbin, Cllr Eddie Fitzpatrick and Cllr John Foley.

Fine Gael councillor Noel Cribbin made a proposal to draw down €13,000 from an existing €170,000 fund for community projects, to enable the completion of the feasibility study on retrofitting homes.

Cllr Cribbin says the completion of the study would allow homeowners in Edenderry to share in a €1 million grant to have their homes retrofitted as Ireland continues to move away from the burning of solid fuels, particularly peat, on which many homes in the Edenderry area are dependent.

However, a number of councillors disagreed with Cllr Eddie Fitzpatrick from Fianna Fail tabling a counter-motion, to raise the €13,000 by asking homeowners interested in the retrofitting to pay a fee in the region of €70 towards the survey. "Then they are buying into the project," Cllr Fitzpatrick said, "but at the minute this is not a project, it's just a feasibility study."

The two proposals tied at the vote stage with three councillors (Cllrs Cribbin, Hackett and Quinn) voting against the counter-proposal and Cllrs Robert McDermott, Eddie Fitzpatrick and John Foley voting in favour. As chairman of the municipal district, Cllr Foley had the deciding vote and voted for the counter-proposal.

An incensed Cllr. Cribbin, who has been working on progressing green projects in Edenderry for a number of years expressed his anger following the meeting.

"At this time, with unemployment in the town at an all-time high and the people of Edenderry continuing to struggle through the pandemic, the idea of going door-to-door and asking families to hand over €65 is ridiculous," he said.

"Edenderry Tidy Towns was one of a tiny number of community groups who were successful in being considered for the joint community retrofit scheme, which is a massive opportunity for the town, not only for homeowners who would see the benefits in their own homes, but also local tradesmen, who would benefit from the significant employment the scheme would provide.

"I saw an opportunity to fund the scheme by applying through the Just Transition Fund, which, after a rigorous application process, was approved. This means Edenderry is in line for a grant of €1 million but prior to that the Transition Fund has already granted €70,000 on the condition that the town provides matching funding of €13,000.

"This money is to be used to complete the feasibility study to get the information required on the exact number of homeowners interested in benefiting from the grant and the level of work needed in their homes."

Cllr Eddie Fitzpatrick pointed out that homeowners will only see the benefits of the retrofitting if they can provide 50% of the funding themselves because the grants will only cover 50% of the costs. He estimates a retrofit could cost €30,000 overall, meaning homeowners would have to stump up €15,000, something out of the reach of most people.

He questioned the logic of spending €13,000 from this community funding on a survey with this in mind, given the numbers likely to take up the grants down the line.

"I proposed that a survey be carried out of private homes and businesses within Edenderry town to identify who would or might be interested in having their homes retrofitted as part of this Just Transition project and this, in turn, would give all
homeowners an opportunity to buy into this project to ensure its success for Edenderry.

"It is estimated that the cost of a BER rating survey would be an average of €300 per house or business and that the Just Transition fund would cover part of this cost and therefore if each household interested in having their homes retrofitted made a contribution in the order of €70, this would provide the match funding and ensure that those homes were committed to this
project as part of the Carbon Challenge project for Edenderry."

Cllr Cribbin estimates that approximately 300 homes in the town could benefit from the grant.

He went on to say, "It is beyond belief that a community fund of €170,000 is sitting there untouched, precisely for use in benefitting community projects such as this. Meanwhile, some local representatives have voted against a proposal that would have far-reaching benefits for the town.

"The opportunity to benefit from participation in the project has a deadline and I am terrified that this vote means the people of Edenderry will be denied this brilliant opportunity. It is local politics at its worst," he claimed.

Cllr Cribbin raised the issue at the full Offaly County Council meeting on Monday, March 15, but Cathaoirleach John Carroll said it wasn't on the agenda and he said "that is an Edenderry so we will leave it at that" as he moved on in the agenda. Cllr Cribbin said he contacted Cllr Carroll and other councillors about the issue last Friday prior to the meeting.

Cllr John Foley also released a statement in response to what he described as "misinformation into the allocation of taxpayers money."

He said of Cllr Cribbin's proposal: "Nothing was submitted in writing for councillors to consider for this proposal, which is standard procedure.

"It would be wrong for any Councillor to use taxpayers money without a proper proposal being submitted. The money requested from Cllr Cribbin was to carry out a survey. The proposal, if passed, would not benefit one household in Edenderry financially."

"Surely when looking for funding, some form of homework should have been done on the project such as, who is going to carry out the survey? Is there a quote for the work? What area does the survey cover? Are there houses in the catchment area going to be left out? Remember this funding is for a survey only and if a household were to proceed further they would need a BER cert which would cost the household approximately €125.

"The cost of retrofitting is beyond the average household, anything from €30,000 - €50,000. Cllr Cribbin mentions 300 - 400 houses and giving a few thousand to each house. That would cost up to €800,000 where is that money going to come from? As I already stated, this is taxpayers money. We did not have the information required in writing from the various organisations to consider this proposal."

Cllr Cribbin insists he has been working on progressing the project for a number of years and that he would continue to seek funding to make it a reality.