Offaly T.D. believes in 'sticking to principles in politics' 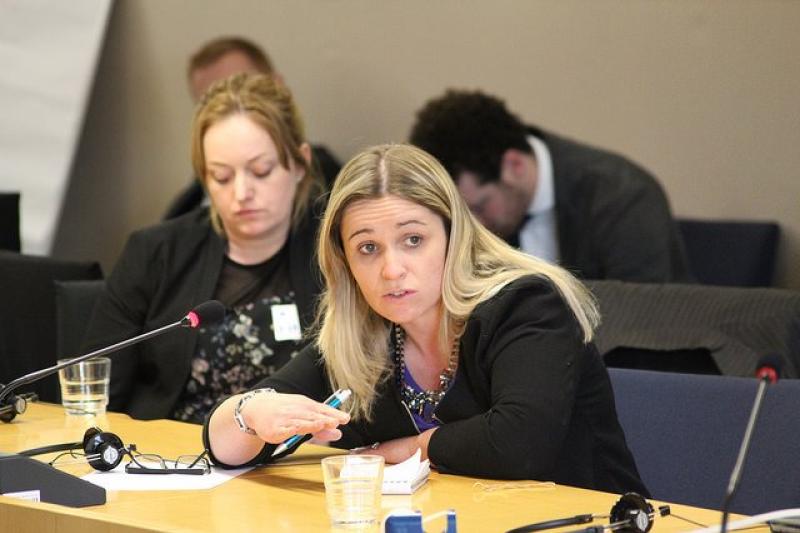 A LOVE of the Irish language and the country's history as well as a strong belief in the importance of education have shaped Carol Nolan's life since childhood.

Now a high-profile Independent TD, the primary school teacher and Cadamstown native was originally elected a Sinn Féin Dail Deputy for Offaly in 2016 but left the party after a very public falling out over the contentious issue of abortion in June 2018.

She was re-elected as an Independent member for the reconstituted Laois/ Offaly five-seater last year and sits in Dáil Eireann as a member of the Rural Group of Independent TDs.

In her youth she was strongly influenced by three women - Ms Fitzgerald, a retired teacher her family lived beside in Portlaoise, Mrs Ryan, who taught her in 5th and 6th class in Kinnitty N.S. and Mrs Keogh, a “brilliant and gifted” Irish teacher in Kilcormac Vocational School.

In her careers both as a teacher and politician Deputy Nolan said she hasn't encountered any barriers which she believes were gender based.

And she disagrees with the assertion that politics is especially challenging for women.

“I don’t think politics is any different or any more challenging than the hard work that so many women do in terms of farming, nursing, teaching, Garda duties or shift work in factories,” Deputy Nolan told the Tribune.

But, she added “there is an issue in terms of women becoming involved in politics which may be attributed to men dominating this area for so long but I believe that is starting to change.”

In order to encourage a greater number of women to be involved in poltics, the Offaly TD feels that “younger women participating in debating and in campaigning at second and third level would possibly lead to greater participation.”

While not going into detail into her resignation from Sinn Fein, she stated “all I would say on that issue is that it has contributed significantly to reinforcing my belief in the importance of sticking to your principles in politics.”

“I remain a passionate Republican who cares deeply about our language, our rural culture and our history,” she stressed.

“What has deeply encouraged me, however, is that since then, almost three years ago now, my constituents have come to appreciate and endorse me as an Independent TD who will keep her word and work tirelessly for them, with or without a party. I have forged my own distinct identity and the people have been happy to elect me on that basis.”

Deputy Nolan said that as an Independent TD it was easier “to develop my own voice and have that heard.”

She stressed she was able to offer “a distinct, individual political view, unconstrained by a party whip system.”

But, in terms of “getting my message out there”, she claimed it was more difficult “accessing national or sometimes even local media platforms”.

Asked if she would be amenable to serving in Government in future as part of a broad coalition Deputy Nolan said she would “certanly be open to engaging as constructively as possible on this issue.”

“But what I would say is that I would never serve in Government merely for an opportunity to ‘advance’ my own career. The only clear criteria that guides me is whether being in or out will improve the lives of my constituents. There is always a genuine need for a robust opposition just as there is always a need for strong stable governance.”

She prediceted that the economic, social and health fall-out from Covid and Brexit will shape this country for the next few years.

“So much of this will also involve tackling the massive problems that Government has allowed to build up,” outlined Deputy Nolan stating that “the waiting lists in all areas of health are going to be significant.”

She added that the horticultural and forestry sectors are on the “brink of complete destabilisation and the agriculture sector, especially beef and suckler farming, demands greater levels of price transparency.”

The Offaly TD stressed that solutions to these problems will have to be delivered upon. She added that “housing is and will also remain a clear priority that any future Government must get serious about tackling.”

“It is also vitally important that we engage with the issue of educational disadvantage and the need to properly resource education at all levels,” said the former primary teacher.

She stressed the “overarching policy priority [of Government] has to be about asking a simple and fundamental question; who is this policy really benefitting? If is not the people, then who?”

“ We must return the interests of ordinary people to the centre of all our policies,” added Deputy Nolan claiming that “at present there is far too much aspiration and far too little pragmatism within Government policy.”