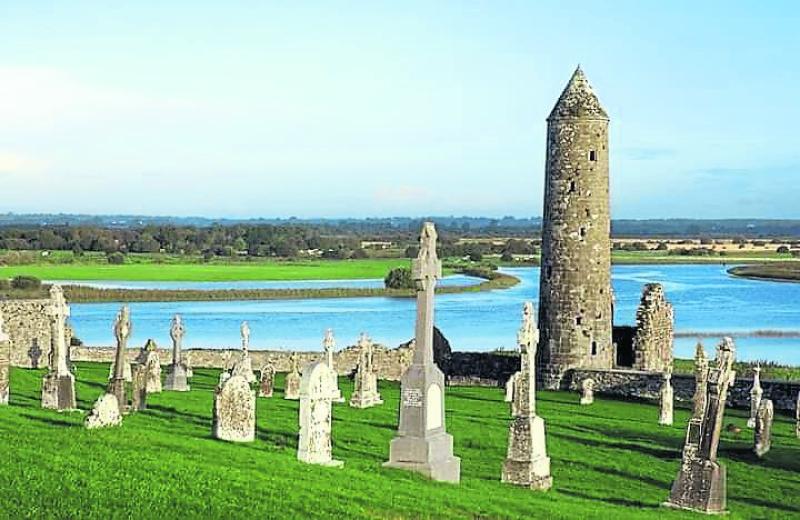 The Round Tower at the ancient monastic site of Clonmacnoise has been selected as Offaly's Favourite Building.

The selection follows voting by thousands of readers from an initial list of 50 buildings which was narrowed down to a shortlist of five and published in last week's Tribune.

The tower, known as O'Rourke's Tower, forms part of an extensive site that includes the ruins of a cathedral, seven churches, two round towers, three high crosses and a large collection of Early Christian grave slabs.

Most of the churches have recently undergone comprehensive conservation works, mostly re-pointing, with the Nun's Church (about 1 km off site), currently under wraps while it too undergoes the same process.

The Chronicum Scotorum records that it was finished in 1124 by Turlough O'Connor, king of Connacht, and Gilla Christ Ua Maoileoin, abbot of Clonmacnoise.

Eleven years later it was struck by lightning which knocked off the head of the tower. The upper part of the tower is later work, so there is some speculation that the masonry thus toppled in the storm of 1135 may have been reused in the building of McCarthy's Tower.

The other buildings on the shortlist for Offaly's favourite were Durrow Abbey, Dan and Molly's public house in Ballyboy, the old post office in Tullamore and Charleville Castle, also in Tullamore.

The monastic settlement at Clonmacnoise was founded by Saint Ciarán the Younger, from present day Co. Roscommon, in the mid sixth century.

The monastery was established at the point where the major east–west land route through the  bogs  of central Ireland along the  Eiscir Riada, an  esker  left by the receding glaciers of the last  ice age  crossed the River Shannon.

The first church was a small wooden structure and the first of many small churches to be clustered on the site. In September 549, not yet thirty-three years of age, Ciarán died of a plague,  and was reportedly buried under the original wooden church, now the site of the 9th-century stone oratory, Temple Ciarán.

Clonmacnoise's period of greatest growth came between the 8th and 12th centuries. It was attacked frequently during these four centuries, mostly the Irish (at least 27 times), the  Vikings  (at least 7 times) and  Normans  (at least 6 times).
The early wooden buildings began to be replaced by more durable stone structures in the 9th century, and the original population of fewer than ten men grew to perhaps 1,500 to 2,000 by the 11th century.

Artisans associated with the site created some of the most beautiful and enduring artworks in metal and stone ever seen in Ireland, with the Clonmacnoise Crozier (on display in the  National Museum of Ireland) and the Cross of the Scriptures representing the apex of their efforts.

The  Book of the Dun Cow, a vellum manuscript dating to the 12th century, was written here and its main compiler,  Máel Muire mac Céilechair meic Cuinn na mBocht reputedly murdered in a Viking raid in 1106.

By the 12th century Clonmacnoise began to decline. The reasons were varied, the Vikings under  Turgesius  and the Normans attacked.

The influx of continental religious orders such as the  Cistercians,  Franciscans,  Augustinians,  Benedictines,  Cluniacs, etc. around the same time fed into this decline as numerous competing sites began to crop up. Ireland's move from a monastic framework to a diocesan one in the twelfth century similarly diminished the site's religious standing, as it was designated the seat of a small and impoverished diocese.

In 1552 the English garrison at  Athlone destroyed and looted Clonmacnoise for the final time, leaving it in ruins.
The monastery ruins were one of the stops on the itinerary of  Pope John Paul II  during his visit to Ireland in 1979.