CHELTENHAM PREVIEW: Our man runs the rule over the runners and riders 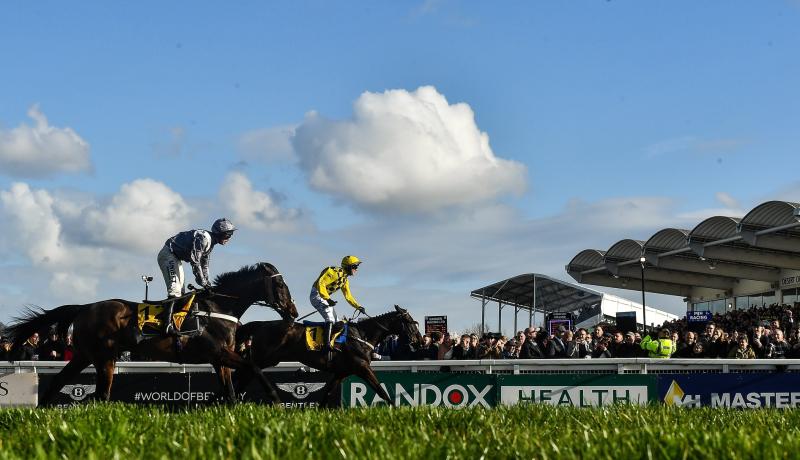 CHELTENHAM PREVIEW: Our man runs the rule over the runners and riders

Spectators are such a big part of Cheltenham but the famous roar as the tape drops for the Supreme Novices Hurdle on Day 1 will have to come from our own front rooms. The festival will take place behind closed doors due to Covid-19 restrictions but Irish horses will be able to travel and they will present formidable opposition for the UK charges.

Currently, Willie Mullins trains half of the ante-post favourites across the 28 races of the festival for 2021. The Carlow handler has already stood on the winners' podium 72 times at Prestbury Park, including to pick up the coveted Gold Cup in the last two years with Al Boum Photo.

He trains the favourite for the very first race on the card this year in APPRECIATE IT (7/4) who should win to get punters off to a good start from their sofas. His only defeats for Willie Mullins came on debut back in 2019 at Fairyhouse and at Cheltenham last year when his colours were lowered by Ferny Hollow in the Champion Bumper.

Since then, he has looked iron clad over hurdles, winning three from three, including at the Dublin Racing Festival in February where he stamped his authority on a good field which included Ballyadam, currently third in the betting market for the Supreme. Another of the Irish brigade could pose a serious threat; that being Bob Olinger, trained by Waterford's Henry De Bromhead. He's currently 12/1 and a good each-way option.

Also on the first day, Tuesday, March 16, it could be the battle of the mares in the Unibet Champion Hurdle. Last year's impressive winner Epatante is back to defend her crown with Ireland's great white hope coming in the form of the unbeaten HONEYSUCKLE (3/1). Epatante lost some of her allure when she laboured to a defeat at the hands of the admirable Silver Streak at Kempton over Christmas.

Silver Streak is a good yardstick and was 6th in last year's Champion Hurdle but is no superstar and had six lengths to spare over Nicky Henderson's super mare. Honeysuckle is the favourite here but is still decent value at 3/1. With an unbeaten record stretching back over 11 races, you have to stick with her. I would be wary of the enigmatic Goshen who could be brilliant as he was in beating Song For Someone by 22 lengths last month, or he'll throw all the toys out of the pram and get pulled up halfway round. If you want an eachway punt, Silver Streak is reliable and will give you a run for your money, no doubt.

The feature on Wednesday is the Queen Mother Champion Chase, a race the Irish have enjoyed success in over the years with the likes of Sizing Europe, Big Zeb and Special Tiara most recently. This year it pits stalwart Altior against Willie Mullins' latest machine, Chacun Pour Soi, who is already odds on at 4/6 for the race. Altior has lost twice in recent times, somewhat diminishing his impenetrable reputation. Having said that, his Cheltenham record is flawless and a swansong in the twilight of his career can't be ruled out.

It's not original to pick the favourite but CHACUN POUR SOI (4/6) will win this barring disaster. He is as good a chaser as Willie Mullins has had in recent times, and he's had some good ones. Chacun Por Soi showed his class in spades against a good field at the Dublin Racing Festival when he eased eight lengths clear of Fakier D'Oudaries. It will take something extraordinary to beat him and if there was a danger, it could be the teak-tough Politologue who won this race in 2020.

On Thursday, March 18, the Stayers Hurdle takes centre stage and it's being billed as a match between Thyme Hill and Paisley Park. I will be backing two horses in this race but it won't be either of those at the prices. If ever a horse was named for the Irish at Cheltenham, even though we won't be on-course, it is FLOORING PORTER (16/1) for Gavin Cromwell.

The Meath trainer is no stranger to Cheltenham glory after training 2019 Champion Hurdle winner Espoir D'Allen and Champion Hurdle third Darver Star in 2020. The Stayers is a funny old race and had a 50/1 winner last year, and a 12/1 and 10/1 winner in 2018 and 2017 respectively. The favourites can falter in this race so it's worth delving deeper into the field.

That's why Flooring Porter is a good eachway bet at 16/1, not to mention his strong form. He made a very good impression in beating The Bosses Oscar at Navan last December but really announced himself in this sphere with a six-length success over The Storyteller in Leopardstown's Christmas Hurdle. He made all that day and could employ similar tactics to run the legs out of his opponents at Cheltenham.

Another interesting contender is GREAT WHITE SHARK (40/1) who could pitch up here after a disappointing run at Gowran in January. What I like about this horse is his course form. He was third at a big price in last year's Martin Pipe, not to mention the fact he's trained by the master, Willie Mullins, who has won this race twice in the last four years with Penhill and Nichols Canyon.

Another piece of form you can't ignore with this one is his win in last summer's Guinness Handicap Hurdle at Galway. He beat My Sister Sarah and Flooring Porter over 2M 6F that day, a more than eye-catching performance. You will have to put a line through his 62-length defeat at Gowran in January but that may be worth doing in this case.

On Friday, March 19, AL BOUM PHOTO (5/2) will aim to emulate Arkle and Best Mate in winning three Cheltenham Gold Cups. I genuinely hope he does it for Willie Mullins who waited until this horse's win in 2019 to get his hands on the Gold Cup. He is the quintessential Gold Cup horse now and so lightly raced for that very reason; to have him primed for Prestbury Park.

He now heads straight to Cheltenham and it will take something special to stop him. The story the UK contingent will be hoping for the horse named after AP McCoy and trained by Nicky Henderson to prevail. CHAMP (7/1) was dead and buried, fully 10 lengths behind the leaders jumping the last in the RSA last season, but somehow managed to reel in and beat Allaho and Minella Indo on the line.

The field couldn't run down Al Boum Photo up the hill in the last two years but if one horse can, it's Champ, and what a story it would be for AP McCoy and owner JP McManus.