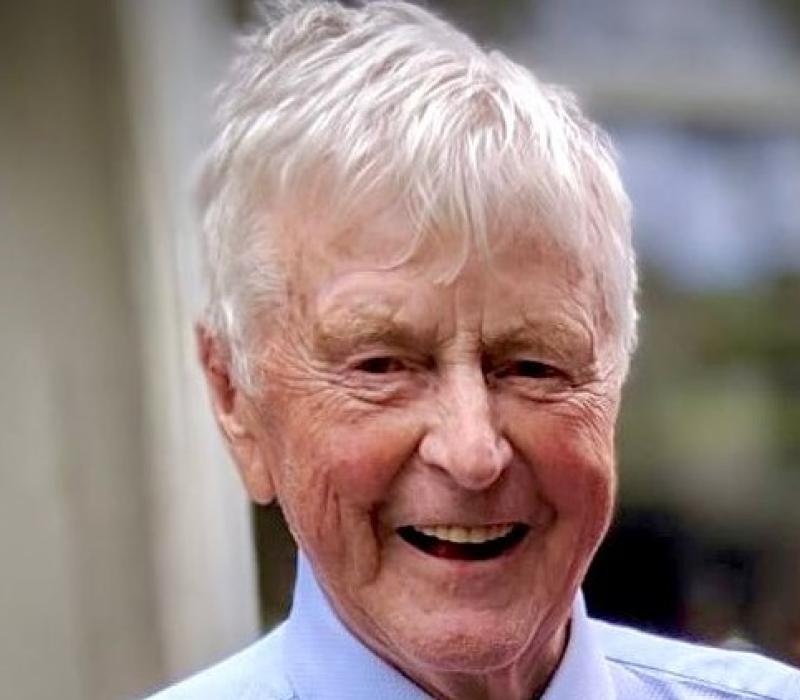 THE community of Rhode waved goodbye to one of its foremost citizens on Sunday when the funeral took place of Tim O'Sullivan.

Tim passed away peacefully at his home, Clonin House, Rhode, on Friday, February 19, surrounded by his loving wife of 57 years, Teddy, and his family.

The deceased was well known in the machinery trade, having founded his business in 1974 and grown it over 40 years with his drive and determination.

But the word on most lips when he was laid to rest following Mass on Sunday, February 21 in Rhode was “character”.

Tim's days as a performer in Edenderry Musical Society were recalled by many who offered their condolences and for all of his life he was admired for his skills as an entertainer, storyteller and poet.

His son Pat paid a touching tribute to him at the funeral Mass and detailed how his remarkable personality shone through in so many arenas, from the home to the workplace and to golf courses all over the world.

“Tim loved life, he loved people, he loved jokes, he loved stories and poems and most of all he loved to make a stranger smile.”

He would issue an invitation for tea in Rhode as he handed out his business cards and his unbelievable appetite for hard work inspired his family and friends to strive for better.

Pat said his stubborn determination remained even to his last few days when he wanted to put his boots on and go to the office “perhaps to do one last deal”.

“There are a lot of great hardworking people from Rhode who worked with Tim over the years. He was a tough but kind taskmaster. Tim was fiercely loyal and his loyalty was copied by many.”

The deceased did not take up golf until his mid to late 40s but he made up for lost time, playing all day Sunday and using both his wicked sense of humour and his expert ability to retrieve lost balls.

“With his wonderful smile he made friends on golf courses all over the world,” said Pat.

Tim's son said there was another side to the man, one his family were not really aware of until close to the end.

“He was incredibly kind and generous. So many people have come forward in the last few months, especially in the last few days, to tell us that in their deepest hour of need, Tim O'Sullivan came quietly forward to offer his help to neighbours and friends and even strangers.”

Tim had a profound sense of responsibility to help people and he did so privately but all the while his true love was his wife Teddy and he remained completely devoted to her, his five children, nine grandchildren and a home shared over the years with “countless dogs and horses and cows and cattle.”