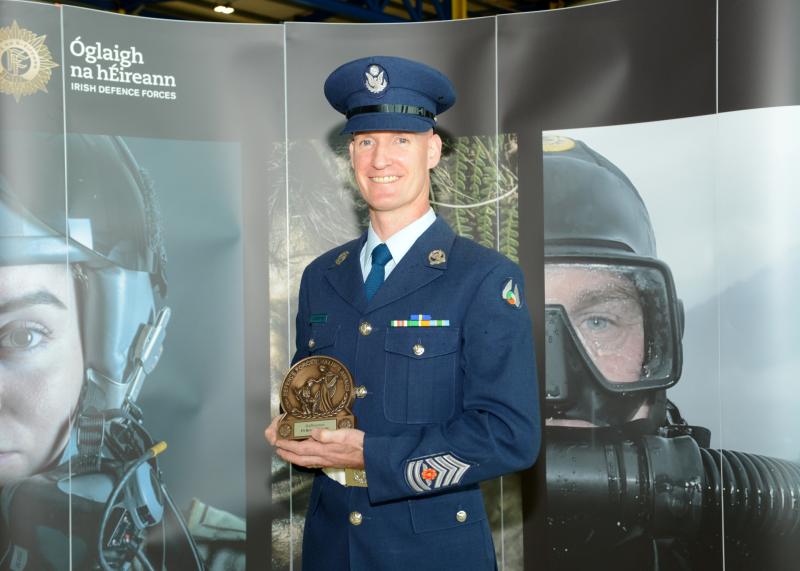 Over the last three years, the Defence Forces have recognised members within the organisation who have shown outstanding attributes enshrined in their values.

Last year’s award ceremony took place in Áras an Uachtaráin with the President of Ireland Michael D. Higgins, who is the Defence Forces Supreme Commander. Due to the Covid-19 pandemic the 2019 award ceremony was delayed by a number of months, and was held in Casement Aerodrome, Baldonnel on Wednesday, December 16 last.

The eventual winners who won in each of the value categories were nominated by their peers and judged by a panel of Non-Commissioned Officers (NCOs) from around the country.

Offaly native Flight Sergeant Brian O’Keeffe was recognised for his Selflessness and his citation reads, “for the time devoted to the development, motivation and mentoring of young technicians and apprentices in the Flight Training School.”

Flt Sgt O’Keeffe, Air Corps Flight Training School (FTS), who is a highly professional individual and was nominated in many other categories, has consistently exhibited his selflessness in his day to day work. It has been said that he shows a willingness to volunteer and will put unit operational requirements before his personal needs. He is seen as the go-to person to provide advice on many topics and gives his time freely to help guide and motivate young technicians and apprentices. He has now been recognised for that selflessness as he mentors and shapes the next generation of aircraft inspectors.

The full list of winners and their respective units are as follows:

The 2019 awards were presented by Defence Forces Chief of Staff Vice Admiral Mark Mellett DSM. Speaking at the event, Vice Admiral Mellett said, “We have continued to build on our values as we strive for our vision to ‘Strengthen the Nation by inspiring pride and leading excellence’. Our values of moral courage and physical courage, respect, integrity, loyalty and selflessness serves as a framework for all our professional decision making and actions, but also for everyday life - and that is only right because our values have equal application when we hang up our uniform at the end of the day.”

Flt Sgt O’Keeffe joined the Defence Forces in August 1992, by undertaking an Aircraft Technician Apprenticeship in the Air Corps. On completion of his four-year apprenticeship, he commenced work in No. 4 Support Wing, Airframe Repair Flight (ARF) Hangar, carrying out second line maintenance on Aircraft. During his time there he worked on numerous aircraft types.

He completed his Potential NCOs course in Athlone, and his Standard NCOs course in Defence Forces Training Centre (DFTC). He has served overseas as a peacekeeper in Lebanon with A Coy, 81st Infantry Battalion UNIFIL. Outside of his normal work Brian trained as an Advanced Unarmed Combat Instructor and Physical Training Instructor. He has worked as a military instructor in the Military Training School in Casement Aerodrome, and in DFTC with the Cadet School and NCO Training Wing, where he would have trained and influenced new junior leaders.

In January 2020, Brian was promoted to his current of Flt Sgt, and he is currently completing his 28th year of exemplary military service. Brian resides in Walsh Island, with his wife Aisling, and their three children, Dylan, Ethan and Saoirse.

Due to Covid restrictions families were not able to attend the ceremony, but Brian said, “My family were very supportive and understanding of the situation with regards to not being able to attend to receive the award. My wife Aisling and children have all expressed that they are proud of my achievement.”

Asked about his experiences of serving in the Air Corps, Brian explained, “I have been very lucky in my career in the Defence Forces, to have had a lot of wide and varied experiences in technical and military fields. My knowledge and career have been shaped by the example set by other officers, NCOs and my colleagues, who were an example for me to aspire to and follow. I owe so much to my instructors and mentors, and to all the military personnel, both technical and military that have trained me, led me and helped me through my career. I would not be where I am today without their excellent help, guidance and support.”

I would like to continue to progress my career by completing a Senior NCOs course. I also aim to continue my work in No. 4 Support Wing in ARF Hangar, as a Senior Aircraft Inspector, and help those coming up the ranks to someday take over from me. I work with a great bunch in ARF and FTS, who are well motivated and excellent to work with, it is a privilege to serve with them. I am extremely privileged to have had such a wide and varied career, I am very grateful to the Defence Forces for giving me such fantastic opportunities and a great career. It truly is ‘A life less ordinary’ - as are all the professional and amazing men and women that make the Defence Forces such a great organisation.

Plans are now afoot for the 2020 adjudication and awards ceremony to take place in 2021.