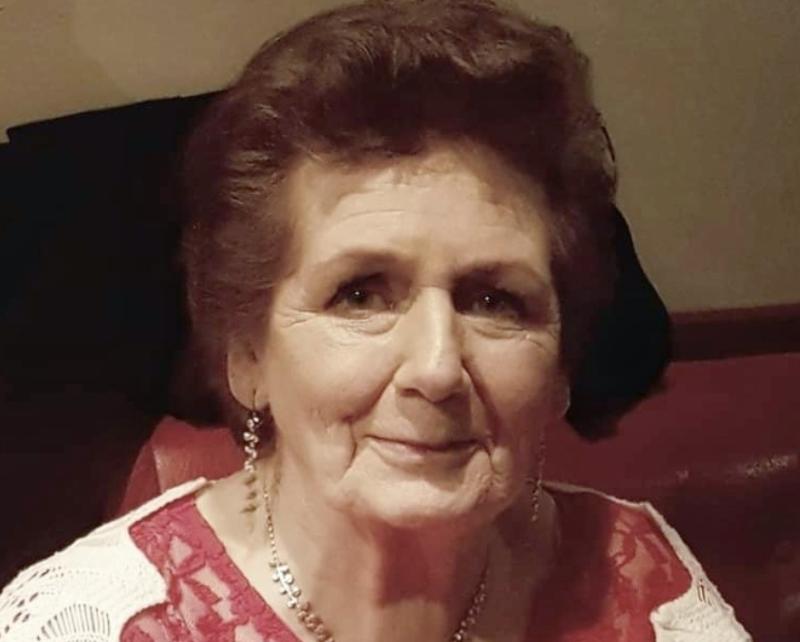 Patricia had borne a long illness with dignity and fortitude and passed away peacefully at the Midland Regional Hospital, Tullamore surrounded by her family.

She was well known in her adopted Tullamore as she worked for over 13 years as a lollipop lady on one of the town busiest arteries, the Arden Road.

Her jolly and avuncular nature endeared her to schoolchildren, parents, teachers and motorists alike.

Daughter to the late Paul and Mrs Lil Sutton, Patricia grew up in Edenderry and lived there until her marriage to Barry Lacomber on her 24th birthday.

She had left school at the tender age of 14, as was then the practice, and went to work in a local shop as an assistant to her neighbour, Mrs Kelly later securing employment in the shoe factory in Edenderry.

Marquee dances were popular with young peope at the time and Patricia met her future husband while travelling on a bus to a dance in Tullamore.

After their wedding the happy couple moved into Barry's childhood home in Convent View as his family had relocated to Bray in Co. Wicklow.

An outgoing and socialable person, Patricia was a keen bingo player and travelled all over the region to attend sessions of the game.

She was also an accomplished knitter and enjoyed knitting clothes items for family and friends.

Deeply religious she completed an hour of Perpetual Adoration to the Blessed Sacrament in the hospital chapel for many years.

Her remains were removed to the Church of the Assumption on Friday morning, January 29 where a private Funeral Mass was celebrated in keeping with Covid-19 restrictions. Burial afterwards was to Clonminch Cemetery.

To her husband Barry and family Paula, Jennifer, Sabrina and Shane, sons-in-law Gordon and Ronan, daughter-in-law Carmella, her adored grandchildren and great-granddaughter, brothers Peter and Andrew, sister Anne (deceased), her brothers and sisters-in-law, nieces, nephews, extended family, neighbours and many friends the deepest sympathy is extended.