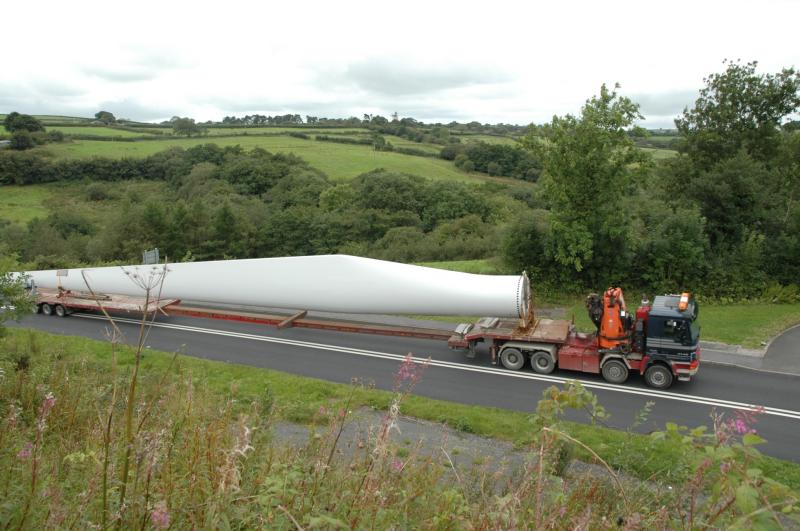 THE large turbines for a proposed wind farm near Monasterevin will have to be transported to the site through Offaly because of access difficulties at the Grand Canal.

The Ummeras wind farm, a five-turbine project planned by Norwegian energy giant Statkraft, is being opposed by a number of individuals and interest groups in the east Kildare area.

The opponents argue that its location close to the canal 'blueway' is unsuitable and they have also claimed it could have a negative impact on two other major attractions being planned, a distillery backed by U2 frontman Bono and a Lough Boora style peatlands park.

A planning application for the wind farm, whose turbines will have a maximum height of 169m, was lodged with Kildare County Council on January 22.

Consent for work on roads and junctions at a number of locations in east Offaly was to be sought on the same date but Offaly County Council ruled the application was incomplete and it will be resubmitted.

Statkraft are the company behind the planned 12-turbine Moanvane wind farm and another near Cloghan. The firm also hopes to install 12 turbines at Drehid, north Kildare, east of Edenderry.

Mary Fanning McCormack, the veteran broadcast journalist who lives and farms in the area close to the proposed Ummeras wind farm, said she is “vehemently” opposed to it.

Ms Fanning McCormack said multimillion euro projects like the canal blueway, the Ballykelly Distillery and the Umeras Peatlands Park will have considerable spin-off benefits for communities on both sides of the Kildare/Offaly boundary.

“All of these projects will benefit the village of Bracknagh and nearby towns with hundreds of thousands of tourists destined to come to this unique area,” said Ms Fanning McCormack.

Tourists are attracted by the wildlife, peace and tranquility, she said, adding that the area is strongly associated with the poet Gerard Manly Hopkins and is the location where he penned Pied Beauty.

“It is my understanding that if this project goes ahead the residents of these villages will be subject to major disruption and roadworks to facilitate a project in Kildare,” she said.

“I am 100 per cent behind green projects but if you walked Ireland you could not pick a more unsuitable site.

“The only access to the sites are two lock bridges and Statkraft has stated in their brochure update of September 2020 that there will be no construction traffic over these two bridges.”

A Statkraft spokesperson said the company is applying for planning to Offaly County Council for what was described as “the abnormal load delivery route”.

The company began its consultations with the public prior to seeking planning permission and because of Covid-19 restrictions, a virtual information centre has been developed online.

A video presentation by John Staunton, environmental scientist with Tobin Environmental Engineers, who prepared the environmental impact assessment report for Statkraft, confirmed the turbines will be coming via the Dublin-Galway motorway near Tullamore.

“Some minor temporary works are also required at a number of pinch points along the turbine delivery route from the M6 near Tullamore as part of the proposed project in order to allow for the transport of the oversized components to the proposed wind farm site,” said Mr Staunton.

The developers say the setback distances from houses are at least 680m and there will be no shadow flicker affecting any dwelling.

The company is proposing a community benefit fund of about €150,000 a year and rates payable to Kildare County Council are expected to amount to a similar sum each year.

Statkraft, which has offices in Cork and Tullamore, expects that 40 jobs will be created during construction and the wind farm will have an output of about 30MW.