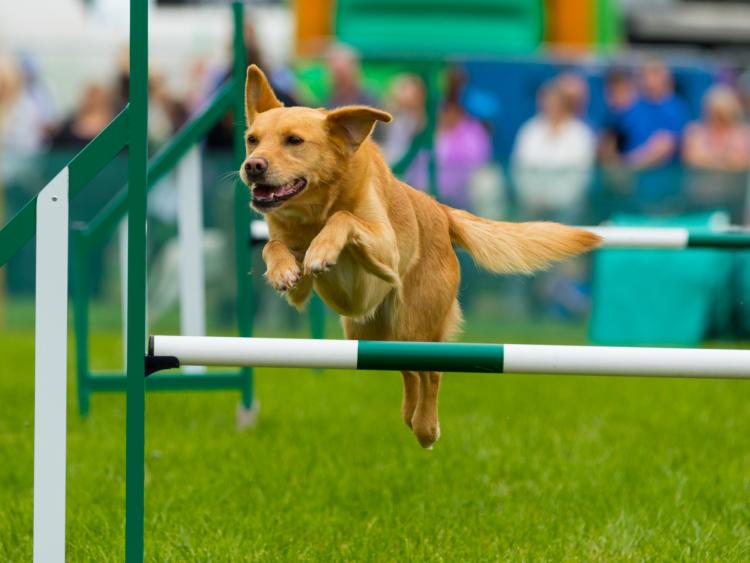 Action in the Show's dog section at the 2019 event

'“Some sort' of Tullamore Show and FBD National Livestock could be held next August despite the ongoing Covid-19 pandemic.

The hope was expressed by the outgoing Chairperson of the Show Executive, Brenda Kiernan at the body's AGM, held on zoom.

Jim Harrison of the Irish Shows Association predicted it may be possible to hold classes in the FBD National Livestock Show in a “scaled down” event.

Last year's show made a financial loss of €90,000 after being cancelled due to the Covid-19 pandemic.

Show Auditor, Michael Kinsella, of the BCA accountancy firm, revealed income for the year was just €21,000 but a number of standing expenses, including office and insurance costs, were incurred.

Ms Kinnarney, who has been involved with the show for almost three decades, will remain on as a member of the Show Executive.

The position of secretary will be filled by Chelsey Cox, who has been a member of the show office team for some years as well as being involved as a volunteer.

The new chairperson, award-winning Leamore dairy farmer, Joe Molloy said the Show Executive looked to the future with confidence and was ready to face the challenges ahead.

He said that a decision on whether a show will be held or not, subject to Government and health experts advice, on the second Sunday of August will be taken within the coming weeks.

ISA Secretary, Jim Harrison, from Monaghan, suggested it may be possible to hold a scaled down event with the classes in the FBD National Livestock Show being staged.

Mr Harrison, who is recovering from Covid, expressed the fear that many smaller shows would not survive if they were not able to be staged this year.

In her Chairperson's address, Mr Kiernan said the Show, like all other events of its kind in the country and around the world, was facing into 2021 with the problem of Covid-19 still present.

“We must continue to abide by Nphet guidelines,” stressed Ms Kiernan adding that all members attending the AGM by zoom knew people who had contracted it.

“But it will come to an end,” she outlined.

Ms Kiernan said she was delighted to hold the meeting by technology and referred to the virtual show day which was held on what should have been the actual show day last August.

“I want to thank all those who helped to keep Tullamore Show alive and hopefully we will be able to hold some sort of show this year,” she added.

“There is light at the end of the tunnel will the roll-out of the vaccine.”

Ms Kiernan thanked all those who had ensured the ongoing success of the event including the hundreds of volunteers, exhibitors, sponsors, local landowners and the office team led by Freda Kinnarney.

Paying tribute to Ms Kinnarney, the outgoing chairperson said she had served with distinction over the past 28 years and “looked after each and everyone of us.”

“You brought s along, you helped us whether in the office or on the field.”

“I know you are staying on the executive in a lesser capacity but you're entitled to a little bit of a rest,” said Ms Kiernan.

She said that she had also thoroughly enjoyed her term as chairperson and the wished the incoming chief and the new team every success.

In a brief response, Freda Kinnarney said it had been an honour and privilege to be involved for so many years with the event.

Auditor Michael Kinsella said the show was in a strong place financially thanks to the hard work of the executive and the generosity of sponsors. A financial reserve had been built up, he outlined.

“Hopefully looking forward the show will be able to operate in some for in the coming year,” said Mr Kinsella.

ISA Secretary Jim Harrison also extended best wishes to Ms Kinnarney from his organisation and “all the shows in Ireland.”

He said that 2020 had been a very difficult year for show people and said it appeared there would be problems in the coming year running such events.

He said he was a good friend of the health expert Sam McConkey, also from Co. Monaghan, who he revealed had speculated the virus could disappear as quickly as it had arrived.

“If we get the vaccine out who knows but a miracle could happen,” added Mr Harrison.

But, he said, he couldn't see upwards of 60,000 people attending a show in Tullamore next August.

“We could see shows running with certain classes and it would be a no brainer if we could run the FBD National Livestock Show.”