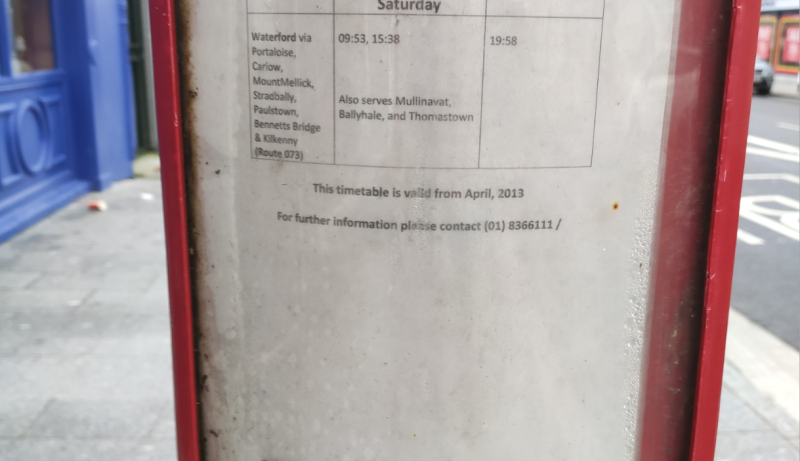 A timetable on a new Bus Eireann bus stop pole erected on William Street dates back to 2013.

The ageing sign was spotted by Councillor Declan Harvey who raised the issue at last week’s Tullamore Municipal District meeting.

The pole was just recently installed but was obviously brought from another location and the timetable has not been changed.

The notice states;' 'This timetable is valid from April, 2013. It also says the bus stops at Waterford, via Portlaoise and travels to Kilkenny.

In a related issue, Councillor Sean O’Brien claimed that despite the new bus stops, buses were stopping indiscriminately on O 'Carroll Street.

"I wonder when we will have the new regulated bus stops so that people will be aware of where the bus stops,’’ he asked.

Meanwhile, Cllr O’Brien said the pedestrian lights at the entrance into the new Lidl on Church road were not working properly. There seems to have been a collision with a pole there," he added.

County Executive Engineer John Connelly said he would follow up with Bus Eireann. "There is a regulation bus stop at O'Carroll," he said. He added that he wasn’t aware there was an issue at Lidl.