Bombing that killed Offaly teenager to feature on RTE Investigates 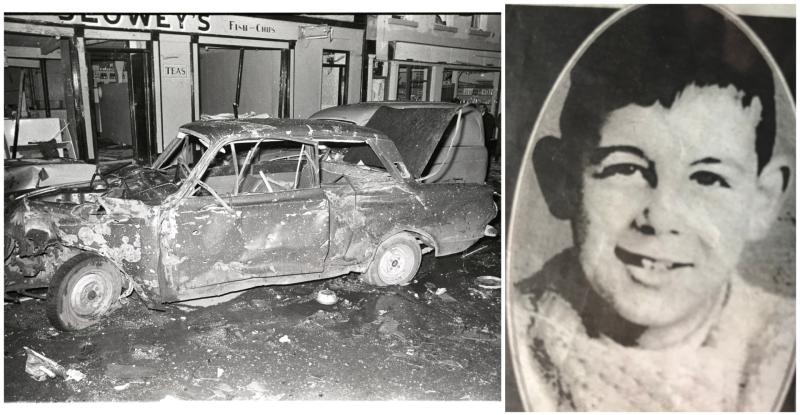 A photo from the scene of the bombing PICTURE: Paddy Ronaghan

In 1972, just three days after Christmas, a no-warning car bomb killed two teenagers and injured nine others in Belturbet Co.Cavan.

In a special documentary next Monday night, December 14, RTÉ Investigates uncovers a crippling lack of trust between police services north and south, questions the political will to bring those behind the Belturbet bomb to justice, and reveals new evidence that British security forces failed to act on credible information, allowing militant loyalists to operate freely in South Fermanagh.

On Thursday night, December 28, 1972, a Ford Escort from Enniskillen passed a garda checkpoint at Aghalane bridge, headed south for Belturbet, across the River Shannon, up Bridge Street past The Diamond before parking in Main Street across the road from Slowey’s chip shop. It was here the car bomb was primed and left waiting.

A delivery truck arrived late into the town so the driver and his 16-year-old helper, Patrick Stanley from Clara, Co Offaly, booked into a B&B for the night. Patrick went to ring his mother from a public phone box to tell her he wouldn't be home that night. At the same time, 15-year-old local girl Geraldine O'Reilly popped into the chip shop while her older brother Anthony waited in the car outside for her. Both Patrick and Geraldine were killed by the bomb, nine others were injured and the border town was left in chaos and destruction.

Local garage owner Paddy O'Reilly recalls the night in vivid detail: "I got on the phone to the post office in Cavan, asked them to send as many ambulances as they could. I went back out on the street to help out as best I could. I got the young lad who was killed, in the kiosk. I would have to go down on one knee, go down low and pulled him out. I got him out onto the footpath, I scooped in under him, lifted him out and carried him up to the showroom. The whole thing going through my mind was the Act of Contrition."

But Belturbet was not the only town targeted in the Republic that night. No-warning bombs exploded in Clones, Co Monaghan and 100 metres from the Fermanagh border in Mullinagoad, Co Donegal. All in sequence. Clones at 10.01 pm, Belturbet at 10.28pm and Mullinagoad at 10.50pm.

"We know very little about Clones in fact because unfortunately, the garda investigation file into Clones is missing. There’s just a little bit about the explosive and that’s about it. No explanation. Just couldn’t be found." - Margaret Urwin of Justice for the Forgotten.

"Why not pursue it? I know there was a lot going on at the time, he was still our brother. He deserved – and Geraldine O’Reilly – they both deserved something to be done about it and there wasn’t anything done about it" - Greta Stanley, sister of Patrick Stanley who died aged 16 years old.

The bombing of Belturbet is inextricably linked to the old border crossing at Aghalane Bridge it was the main road from Donegal, Enniskillen down to Dublin. Aghalane Bridge was symbolic -- half of it was in the north, half in the south – so loyalists decided to take matters into their own hands and blow it up in November of 72.

Loyalists knew this would be a criminal act so they needed clearance from the security forces. Researching border relations in the 1970’s historian Dr Edward Burke discovered an audio tape containing a remarkable interview with Captain – later Major – Vernon Rees at the Imperial War Museum in London. Rees, who commanded British troops in west Fermanagh, recalls being approached by Jack Leahy, a unionist councillor in Lisnaskea. Rees described how Leahy asked him to keep his soldiers away from the bridge for four hours on a particular night.

The blast damaged but did not destroy the bridge. So next day Captain Rees ordered his own men to finish off the job. That loyalist paramilitaries should plant a bomb with the full knowledge, and more significantly, the collaboration of the British Army, would alarm most people. But there was much worse to come for it set in train a calamitous sequence of events. Fearing the economic impact of closing a main road Cavan County Council ignored unionist objections and put down a temporary bridge. Just days after it opened to traffic three no-warning car bombs were driven across the border and planted in Belturbet, Clonesand Mullinagoad.

Two days after the Belturbet car bomb senior officers from the British Army, RUC and UDR met to review border security. Minutes from that meeting were sealed by the Ministry for Defence in London for 84 years. "I have no doubt it’s because of institutional embarrassment. The reason they don’t release papers is they don’t want to admit to what they did" -Sean Donlon, former civil servant Department of Foreign Affairs.

RTÉ Investigates can disclose that British intelligence had identified another suspect, widely unknown until now. Just four months after the December 28 attacks the security forces were aware of “a UDA Commando type gang from Belfast who were believed responsible for various explosions in Eire.”

"They were sending somebody who was a serious player from Belfast to try and sort of extend the UDA’s reach to the border areas and to carry out attacks south of the border. I simply have no idea why that information wasn't passed on to the guards. It’s a very significant lead" - Dr Edward Burke.

What happened in Belturbet 48 years ago had a profound impact on the families affected. "I was very, very close to Geraldine. She came everywhere with me in the car. Football matches, anywhere I was going she just came. I just doted on her" - Anthony O'Reilly, brother of Geraldine who died aged 15 years old.

The Gardai have compiled six reports on Belturbet. Each time the families have asked the Department of Justice for access they are told that because the case remains ‘active’ sharing information could ‘interfere with the investigation’. Furthermore it "could reasonably be expected to affect adversely the security of the State, matters relating to Northern Ireland and the international relations of the State".

Watch RTÉ Investigates - Belturbet: A Bomb That Time Forgot, Monday, December 14, at 9.35pm on RTÉ One and worldwide on the RTE Player.