“Martin McGuinness was a very honourable person and I'm proud to say I'm a member of the same party that he led.” 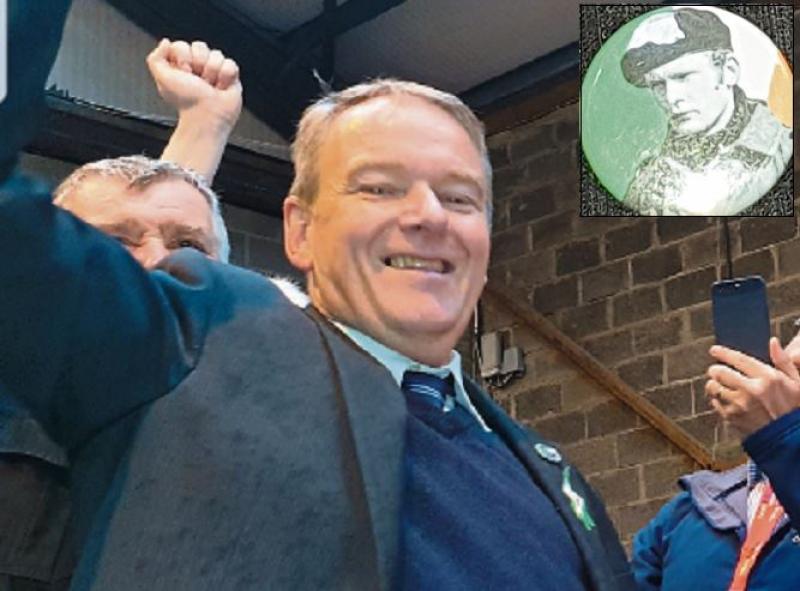 Brian Stanley celebrates his re-election in February, with inset, the Martin McGuinness IRA badge he wore

LAOIS-Offaly Sinn Fein TD Brian Stanley, at the centre of a tweet storm this week, has never shied away from his support for the Provisional IRA.

When voters powered him back into Dail Eireann in February, the poll topper defended his right to wear a badge which depicted Martin McGuinness in Provisional IRA regalia.

The badge pictured McGuinness, a leading figure in the Provisionals from the time of their formation in late 1969, wearing the black beret which is associated with the IRA.

After the 1994 ceasefire the Derry man went on to become one of the architects of the Good Friday Agreement and became deputy First Minister of Northern Ireland in 2007. He died in 2017.

Mr Stanley said he had worn the badge a lot when he was canvassing during the election campaign and he had met a lot of people while doing so.

“People from other political parties are full of respect for the late Martin McGuinness, for the role he played,” said the Portlaoise man.

“Martin McGuinness was a very honourable person and I'm proud to say I'm a member of the same party that he led.”

He said the election was an endorsement for republicanism and said the electorate had delivered a message that they didn't want the “RIC or the Black and Tans back”.

One of Deputy Stanley's constituency rivals in Laois, the then Justice Minister Charlie Flanagan, became embroiled in controversy for plans to officially commemorate the RIC as part of the Decade of Centenaries programme.

Deputy Flanagan, first elected as a Fine Gael TD in 1987, was scheduled to address a commemoration event in Dublin Castle in January.

The event was “deferred” and Deputy Flanagan said at the launch of the Fine Gael Laois-Offaly election campaign in Mountmellick that it would not be on his agenda if he was returned to power.

Deputy Stanley also accused the national media of “bias” against Sinn Fein and claimed that Breege Quinn, the woman who believes the IRA murdered her son Paul on the border in 2007, had been “used” by sections of the media.

“And their relations and friends in RTE, that's who use situations like that, about an issue that has nothing got to do with Sinn Fein or republicanism,” he said.

Paul Quinn, aged 21 and from Cullyhanna in south Armagh, was beaten to death but Sinn Fein has denied republican involvement and one of its leading members in the North, Conor Murphy, alleged the young man had been involved in smuggling and criminality.

That was denied by the Quinn family and before polling day Sinn Fein leader Mary Lou McDonald apologised for not dealing with the issue sooner and Mr Murphy apologised for making the remarks.

Writing in the Belfast Telegraph in 2017, journalist Ed Moloney said Martin McGuinness gave the orders for both the killing of Mountbatten and the attack at Warrenpoint, stating they could be be “explained, if not excused, as acts of war”.