No joy for Offaly players as Athlone Town routed by Dundalk 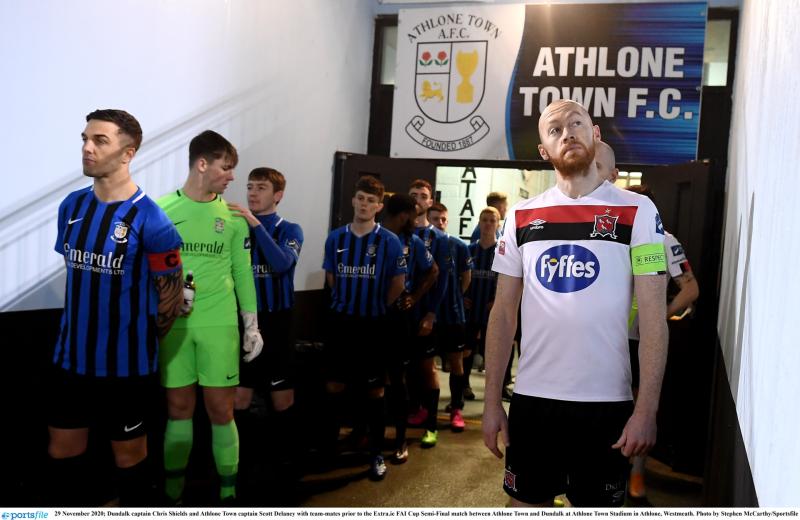 ATHLONE Town certainly had an evening to forget when they were routed by Dundalk in the FAI Cup semi-final on Sunday.

It was Athlone's biggest game in years and in front of a live television audience, they had hopes of a respectable showing against Irish soccer's dominant force – a shock victory was always a very remote possibility but Athlone's worse nightmare unfolded as they were beaten 11-0 on home turf in Lissywollen.

Dundalk were aiming for a place in the final for the sixth successive season while Delaney, who captained Town, and 18-year-old Reynolds, were plotting to bring Athlone to a first FAI Cup decider since 1924.

Nonetheless Athlone, who had earlier knocked out Shelbourne, kicked off with hopes of causing an even bigger upset.

But by half-time they had already been outclassed by the Europa League participants and were 6-0 down.

It finished 11-0 as Dundalk mercillessly maintained the assault on the unfortunate home side and set an FAI Cup winning margin record.

Delaney has captained Athlone Town in recent weeks and he is also a very good footballer who has played senior for Shamrocks.

A centre half in soccer, Delaney played with Tullamore Town in the various underage grades while he also played for them in the Leinster Senior League and Eircom A League. A member of the Defence Forces, he played with St Peter's in Athlone from 2014 to 2018 and was with Willow Park in the 2019-2020 season, playing in the Leinster Senior League. With St Peter's, he won the Combined Counties Football League and back to back trebles in the Roscommon District League.

Delaney has represented the Irish Defence Forces international team at the World Military Games – in the most recent one in China, they reached the quarter-final.

Jack Reynolds has made great progress up the soccer ranks in recent years. He joined Athlone Town's U-15 squad for their 2017 to 2018 season and went up to U-17 in 2018, now graduating to their senior side.

An exciting attacking talent, capable of creating and scoring goals, he was a key member of the Athlone Town U-15 side that won the SSEAirtricity League in 2017 while he was a member of the U-17 side that won the SSEAirtricity League Shield last year. A Leaving Certificate student at Ard Scoil Chairain in Clara, he won an All-Ireland interprovincial U-18s medal with Leinster schools last year.

While soccer has been his priority, he is also a talented footballer and he was in fine form in the Clara attack as they reached the Minor Football Championship final in 2019, losing narrowly to Na Fianna.

Athlone's cause was not helped by the absence of first choice goalkeeper Aaron Myles, a hero of the earlier rounds, who was ruled out with an eye infection.

Substitute netminder Paddy Martyn, another teenager, had to be drafted in on Friday, giving him very little time to prepare for Sunday and the biggest game of his life.

Athlone Town had received a bye in the first round and were drawn against Wexford Youths in the second round, a tie billed as a battle between two First Division strugglers.

Wexford went 2-0 up in the first half before Athlone levelled with two goals in four minute after the break.

Athlone went behind again before Delaney rescued them with a super volley from a David Brooks corner with 10 minutes left.

Town then scored twice in the first period of extra-time to win 5-3, becoming the only First Division side to make it to the cup quarter-finals.

Athlone were drawn at home to Shelbourne and in the shock of the competition, they defeated the Dublin team 4-1, with Delaney getting one of the goals, a crucial 20th minute strike, again from a Brooks corner, which put Town 2-1 ahead.

The match was made all the more memorable for Delaney because he wore the captain's armband for the Lissywoolen based team.

That victory put them into the last four and their ill-fated meeting with Europa League participants Dundalk - the Louth side are in the SSEAirtricity League Premier Division and have had great European experience this season while Athlone Town have struggled in the First Division.