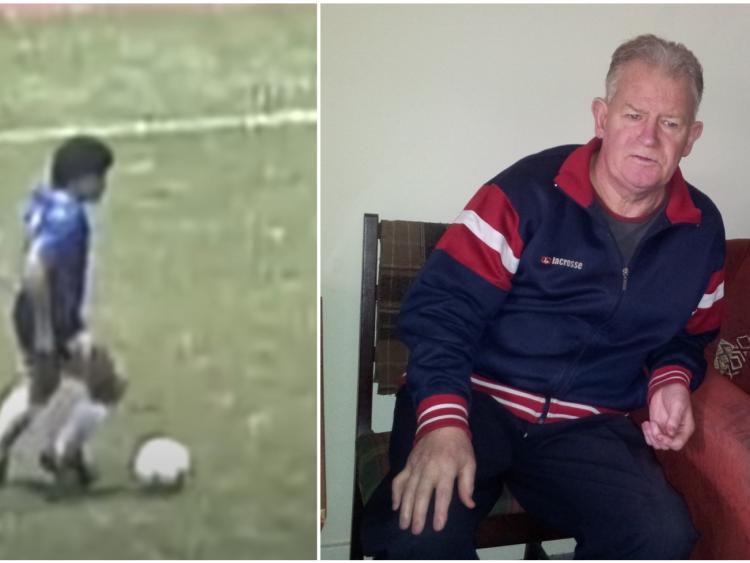 GLOBETROTTING Tullamore soccer player John Minnock identified Diego Maradona as a “magic” prospect when he played against him 40 years ago.

Minnock, the O'Molloy Street native who starred with Athlone Town and Finn Harps in the 1970s, was 31 when he was picked for a League of Ireland selection touring Argentina.

In 1980 he trotted out on the River Plate stadium in Buenos Aires to play the world champions.

The match was televised live and attracted an attendance of 75,000.

Argentina treated it as a full international and Maradona, aged only 20 and in the early stages of his career, did not let his growing legion of fans down.

“Every time he got the ball he could beat three or four players. He was magic,” Minnock recalled in an interview with Gearoid Keegan in 2012.

“You'd be standing looking at him from the other end of the field.”

The League of Ireland team were beaten 1-0 and of course, it was Maradona who scored the goal, nutmegging an opponent in midfield, running on and scoring from the edge of the box.

Minnock had the honour of swapping shirts with Argentina 1978 World Cup captain Daniel Passarella and the Tullamore man, who was playing up front against the sweeper, rated him as his best ever opponent.

Minnock was familiar with football in the Americas having spent a spell in US soccer with San Diego Jaws.

The Offaly man is best known however as the player who could have defeated mighty AC Milan.

In 1975, when he was with Athlone Town, the St Mel's Park based side were drawn against the Italian giants in the UEFA Cup (forerunner of the Europa League).

Athlone had seen off Valerenga of Norway 3-1 in Athlone and 1-1 away in the earlier round.

An estimated crowd of 10,000 packed St Mel's for the visit of Milan, a team which had Giovanni Trapattoni on the coaching staff.

Athlone were holding Milan scoreless when they were awarded a penalty and because regular spot-kick specialist Padraig Nicholson wasn't playing, Minnock had to take it.

In a stadium where you could hear a pin drop, goalkeeper Enrico Albertosi was able to get down and make the save to deny Minnock, and Athlone, a famous moment.

“There wasn't much power in it,” the Tullamore man conceded.

The match finished 0-0 and in the second leg at the San Siro, Athlone lost 3-0, but did manage to keep Milan scoreless for more than 70 minutes.

Milan did not return to Ireland for a competitive game until this season when they played Shamrock Rovers.

Minnock also played in the UEFA Cup against Everton for Finn Harps but the Donegal-based side were beaten 5-0 in each leg.

Even though he shared a pitch with 'The Hand of God', Minnock counts the match for Athlone against AC Milan in the San Siro as the highlight of his career.

“It was great, all this crowd were cheering for us because we were in the black and blue, like AC's rivals Inter Milan,” he said.

“We thought there was only one chartered flight [from Ireland] to the match and yet there was thousands of them shouting for us when we got there. They were Inter Milan fans.”

Diego Maradona, who captained Argentina to the World Cup title in 1986 and starred in Europe with Napoli and Barcelona, was laid to rest this week having died from a heart attack at the age of 60