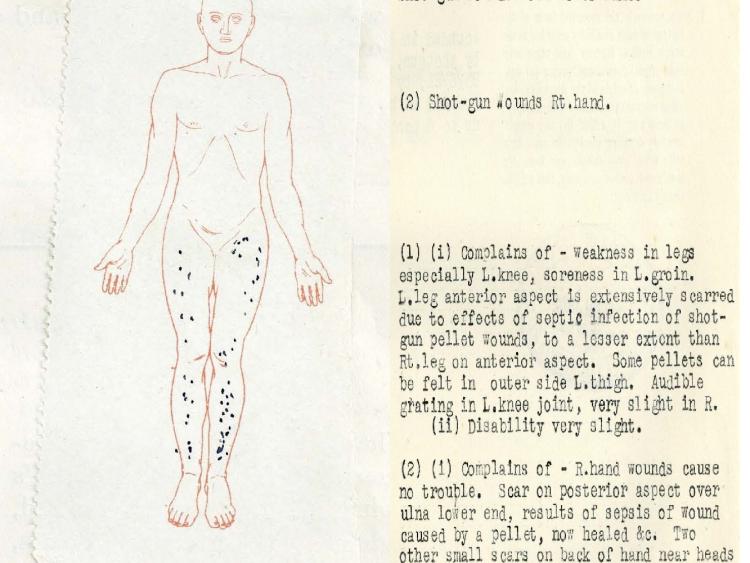 A controversial event occurred in June 1921 at Coolacrease, outside Cadamstown when two men, Richard (24) and Abraham (19) Pearson, were executed by the IRA. The Pearson family home was also burned to the ground. The case came to national prominence in 2007 with the airing of an episode from RTÉ’s Hidden History series entitled 'Killings at Coolacrease'.

The 2020 release from the MSPC reveals the involvement of nine individuals connected in the lead up to, and partaking in, the executions. The application of a further individual, Edward Leahy, has already been released.

County Offaly was, in the main, relatively quiet during the War of Independence. Other files within the collection reveal that General Headquarters (GHQ) were dismayed by the lack of activities in County Offaly. So much so that in April 1921 Thomas Burke was detailed to reorganise the Offaly Brigade and that he remained on in the area and became Brigade Officer Commanding. Burke's arrival coincided with an increase in activities including attacks on barracks and ambushes on police and military. This is borne out among the Brigade Activity Reports for County Offaly (A17 and A18). Burke reveals in his statement to the Advisory Committee that nothing happened in the area without his knowledge and approval.

The episode from Hidden History does make much of the Pearsons' religion and the fact that the family were not from the area. The family are described as Cooneyites, a Protestant sect, but there is nothing mentioned in the files to suggest that their religion played any part in the events. What does come to light is that the IRA had suspicions of the Pearson family. It is noted that Thomas Donnelly was among those detailed to keep the Pearson family under observation and that "he had to use a revolver on more than one occasion to keep them from spying on the movements of the IRA". James Delahunty was similarly detailed and states that there had been considerable hostility between the IRA and the Pearson family. “The hostility was of old standing and arose out of a right-of-way. They frequently acted as host to the enemy forces”.

The flash point that led to the executions occurred on 22 June 1921. A party of 12 IRA men, 3-4 of whom were armed, were felling trees to block the road at Coolacrease. They were fired on by a number of civilians from a distance of 20-25 yards. According to Delahunty, the exchange lasted on and off for one hour. Donnelly adds in his evidence of September 1940 that an RIC man, stationed in Belfast, home on leave "with this crowd"* came along while the tree felling was ongoing and was held up. That a "hostile crowd led by the Pearsons came along and opened fire on the volunteers". Donnelly mentions on another occasion that the RIC man was wounded while attempting to disarm one of the IRA. During the exchange the IRA’s Michael Heaney received gunshot wounds to the wrist and legs. Heaney’s medical report reveals that he was hit by a number of shotgun pellets which were embedded in his legs. Heaney was awarded a wound gratuity of £30 in 1924 for the wounds received. Donnelly mentions that he too was slightly wounded in the exchange. Donnelly, it appears, did not take part in the retaliatory attack. He states that he was arrested at his home on 24 June 1921 and interned until December of that year.

Delahunty says that he had charge of a party detailed to block the road. He informed the Battalion Officer Commanding Joseph Connolly of the attack by the Pearson sons and as a result the Flying Column were readied. Such an open challenge to the IRA could not be ignored in their eyes. Delahunty goes on to say that the Pearsons were kept under observation for one week. On the day of the execution he was detailed to go early in order to keep the suspects under observation and that he could ready arms and petrol for demolition of their house. Delahunty goes on to say that he later assisted with the execution of the brothers. Joseph Connolly, acting as a reference for Michael Cordial, states that Cordial took part "in the shooting of Pearsons". His presence was confirmed by another reference by Jeremiah O’Meara. Cordial himself states he was present at “shooting of Pearsons”. James Cordial too states that he played an active part in the shooting of the "convicted spies" and in the burning of the home.

Joseph Connolly , who was Officer Commanding of the Flying Column, claims in his application for a service pension: “June 30th – shot two Pearsons & captured shotguns & ammo”. His presence is confirmed in references from MP Clare, John Brophy and M Corrigan, all of whom also mention that Connolly was involved in the burning of the home.

Another individual associated with the incident is Michael Seery, whose presence at the shooting and destruction of the home is confirmed by Sean Robbins (a former Brigade OC). Seery did not appear before the Referee and Advisory Committee, which was common for applicants residing outside the country, but refers to the shooting in his application. Robbins also acted as a reference for Joseph Scully and stated that he too was involved in the executions. Scully, himself does not mention the execution but rather says that he was involved in the burning of the "Pearse building at Cadamstown". James Gleeson was another individual present on the day. It is noted in his application that although unarmed he was involved in taking out the two men shot, distributing petrol and setting fire to the premises.

IThe Brigade Activity Reports make little mention of the executions and indeed is reminiscent of the reports concerning the killings carried out by the IRA at Altnaveigh in June 1922. Like Altnaveigh, it is the files of individuals that shine light on the events at Coolacrease. The Brigade Committees were perhaps uncomfortable naming names. It must be remembered that those involved would have been close neighbours of the Pearson family, even if the family had emigrated by the time the reports were submitted in the mid1930s-early 1940s.

* Noted in Killings at Coolacrease that Tilly Pearson was courting an RIC man from Offaly stationed in Belfast. The couple married in 1925.