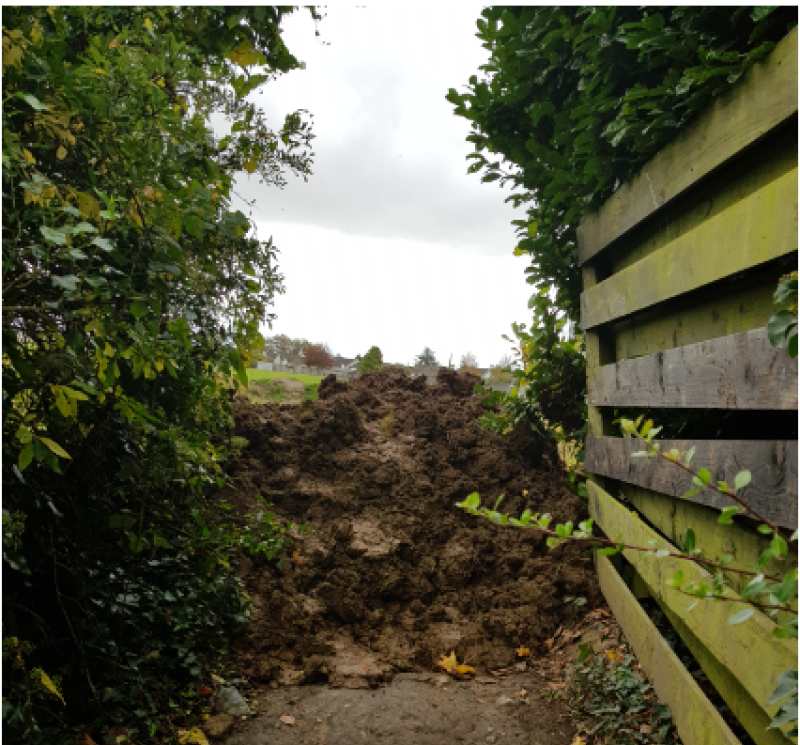 A pedestrian access from Ballin Ri on to Dr Kelly's (Sportslink) in Tullamore has been blocked up leaving residents in the area unhappy as many use the facility to exercise and say they need it now more than ever during lockdown.

The Tribune was contacted by Ger Hayden who lives in the area, he has described the blocking of the access as ''a very cynical move that occurred on the morning after it was announced that we are being confined to within 5k of our homes.''

Mr Hayden said at least one map in the Ballin Ri planning folder has this entrance clearly marked, but in what he described as ''a perfect example of a lack of joined up thinking within the adminisphere of Offaly County Council, this was not enforced when planning was granted for Sportslink at Dr Kelly's a few years later.''

Mr Hayden said the The Ballin Ri maps that were originally submitted did not include the access, but the final published versions that were displayed in the County Buildings 15 years ago did.

''I only became aware that there were maps on the file that did not show that access when I inspected it recently,'' he said. ''Time constraints and the sheer volume of material prevented me digging deeper, but it is reasonable to assume that planners attached this entrance as a condition to the Ballin Ri plans then ignored it when Sportslink (TU12011) came down for decision,'' said Mr Hayden.

According to Mr Hayden, ''the planning department in Offaly County Council consider this out of their jurisdiction because they have leased or sold that ground to the GAA for the Sportslink development.''

He said younger children from the Ballin Ri, Carrig Cluain and Cill Ban areas could all access the facility without the need to venture onto the footpaths of the busy Collins Lane, Arden Rd arteries.

''It has also had a knock on for older residents exercising who may not have their own transport to hand, particularly those who need to minimise contact with others. This has been an important asset to the area since becoming available, removing it now with movement restrictions growing, is heartless. While access may not be able to continue free of charge, it must remain affordable.''

The chairman of Sportslink, Tommy McKeigue said the people made a gap to get onto the grounds and there was never legal access there. ''Our insurance wouldn't cover them. You have to be a member and pay a subscription every year. The ones that pay are covered. That's private land now.'' said the former Fine Gael councillor. ''It was becoming a rat-run they were bringing bikes and buggies onto it and dog waste was becoming a problem. We have had to put up signs. We hope people will cooperate because there are children playing there. We spent in excess of €300,000 on that. We raised it through the generosity of the people of Tullamore and through grants and functions we held. Phase 1 is now complete and it will take nearly as much to finish phase 2'' said Mr McKeigue.

€30 will allow people onto the ground to walk up until December 2021.