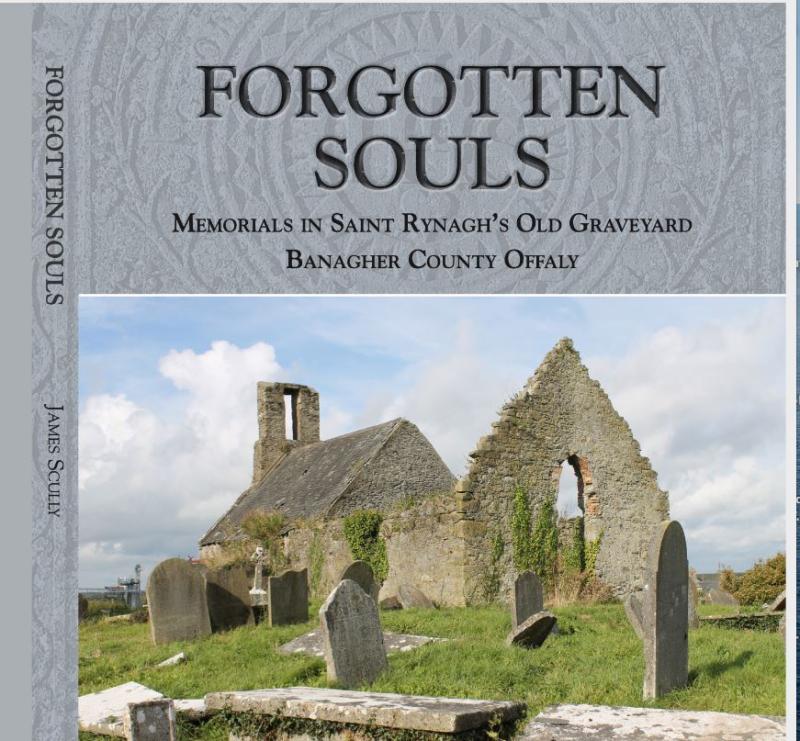 A new book on the history and memorials of Saint Rynagh’s Old Graveyard in Banagher, has just been published by Offaly History with the support of the Heritage Office in Offaly County Council and the Creative Ireland Programme.

The book has 192 pages, almost 400 photographs and historic images plus a collection of essays and short articles on the different aspects and inhabitants of the church and burial ground. The book was written by James Scully, a long-time student of Banagher’s colourful history.

This handsome volume includes a comprehensive survey of 182 memorials ranging in date from 1576 to 1918. A transcription and description of each monument is given accompanied, where possible, with clear photographs. The outstanding quality of the pictures, taken by Peter Pilkington, Eoghan Broderick and the author himself, greatly enhance the engaging text. The addition of dozens of relevant historical images also helps to make the whole production an enjoyable read.

The somewhat lengthy but well-divided introduction explains the reasoning behind the title‘Forgotten Souls’, and elaborates on the methodology of recording and describing the memorials. The work of the stonecutter in general and then in particular in the graveyard, is well described with illustrated references to the rich vernacular characteristics of many of the headstones. Three short articles then recall the impact of the cholera epidemic on Banagher in the 1830s, a famine funeral in 1847 and the story of the gradual closure of the burial ground between 1872 and 1924. Two short essays by conservation architect, Eoghan Broderick and Galway City heritage officer, Jim Higgins treat the ecclesiastical history and archaeological importance of the site in detail. The detailed map by Eoghan Broderick on page 25 will ensure that enthusiasts will easily locate their chosen memorials.

The alphabetical list of the memorials is spread over 160 pages and contains numerous features on military personnel with extracts from important wills and funeral reports. A beautifully illustrated feature recalls the brilliant military career of Captain William Bamford, an acclaimed diarist, cartographer and water colourist who died in Banagher in 1803.

The closing pages carry an alphabetical list of the hundred or so persons whose names appears on a memorial under another surname. Remarkably sixty-five of these are women whose ‘alias’ or maiden name was inscribed on a monument, a custom that stopped abruptly in 1872. The final article entitled An Encounter with Banagher’s Faithful Departed, gives a full account of a creative event held in 2019 where a large audience met with several of Banagher’s most prominent ancestors and were regaled with the trials and tribulations, tales and triumphs of their lifetimes. This piece is also wonderfully illustrated.

Mindful that many who are remembered in this work died in times of epidemic, pandemic or famine, the book is dedicated to all who work on the frontline during the current pandemic. The earnest aspiration that their efforts be not forgotten is both timely and appropriate.

The book costs €20 and is available from Feeney's Day Today newsagents and Paul Flynn's newsagent both on Main Street, Banagher. Also from Super Value, Birr and James Scully 085 710 7569 or jsmeelick@gmail.com. Postal orders to Offalyhistory.com or 05793 21421.