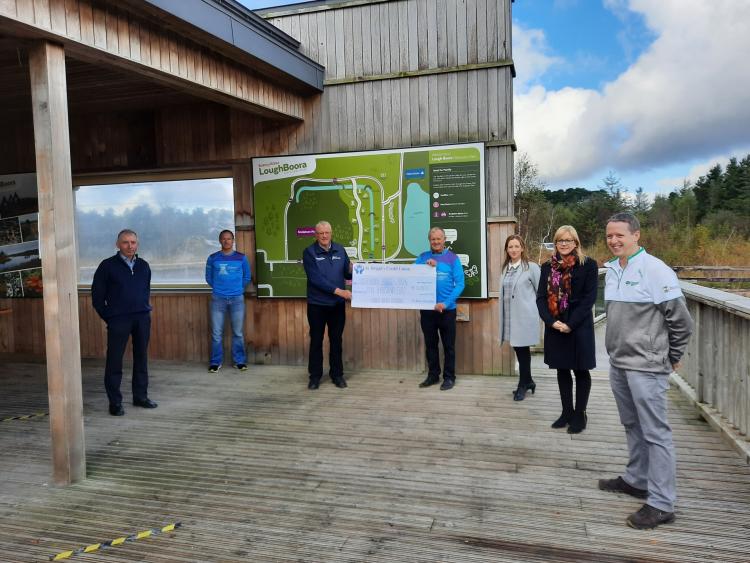 A new and exciting sensory area in Lough Boora will be opening shortly, honouring the wishes of a local man, who worked in the area.

The late Tadhg Collins was the catalyst for this fantastic initiative. During his life, Tadgh worked in managing forestry in and around Lough Boora and in his later years, he spent a great deal of time enjoying the calm, meditative spaces in Lough Boora Discovery Park.

His family wished to support the continued development of Lough Boora Discovery Park and contacted Bord na Móna to establish what could be done, consistent with the principles of the Park. Bord na Mona in partnership with Leamore Leabeg Community Development, Kilcormac Development Association (KDA) and Offaly County Council (OCC) formed a steering group which evaluated several options, before agreeing that a sensory area in Lough Boora would be a fitting way to honour Tadgh’s legacy.

Last week, the project received a funding boost when the Lough Boora Running Group presented a cheque €10,000 to the steering committee of the Sensory Area project at Lough Boora.

John Bennett, on behalf of Lough Boora running group, welcomed everyone to Lough Boora for the cheque presentation for the new Sensory Garden project in Lough Boora on Thursday last.

“We are delighted to be part of this project and to be able to donate the €10,000 towards it.”

“We started out as a small group and we didn't think that almost seven years later, we would be still here and have over €140,000 raised for charity over the last seven years. It is a great facility for us here to run an event and we have brought a lot of people here to Lough Boora as well to run in all of those events.

"We started out with a 5k and a 10k and in the last few years, we are doing the 5k and the half marathon. Unfortunately, this year, with Covid-19, we had to postpone it twice but it's now postponed until next year and hopefully, by March or April 2021, we can go ahead with it. But, time will tell.”

John then thanked the Lough Boora running group and Joe Ryan in Bord na Mona for the use of the facility before making mention of local photographer, Rose Mannion, who year on year was with the group to capture their cheque presentations to the various groups and their other events. “Rose had been with the group since the start and we wish her the best of luck in her recovery after she was struck down by Covid-19. We hope she will be back in Boora with us next year.”

Tom Egan, Manager of Lough Boora Parklands and Chairperson of the project's steering group, outlined how Finbar Collins and Brendan Collins, were the “instigators of this sensory garden project."

“In the sense that their dad left a bequeathment for a project and between us we have come with this project, of doing a special area in Lough Boora that would be dedicated to people of all ability. Hopefully, it will be a lovely project. It is a lovely area and it has been good because everyone came on board including the Leabeg/Leamore Development group, Kilcormac Development Association, Offaly County Council, and the running group and Bord na Mona and the Collins family. I think that we will make it a fabulous addition to Lough Boora. It is something we always wanted to do in Lough Boora and the Collins family got the ball rolling on it.”

Dermot Egan, Offaly County Council, also gave an update on the project. “We had hoped to turn the sod on the project towards the end of the summer but with the procurement process and some delays, it has to be pushed back to the spring of 2021. The contractors are in place and everything is ready to go.”

He then thanked the Collins family for “kick-starting it as it has mushroomed into a fantastic project. We have been successful in accessing several streams of funding, donations, and the contribution from the Lough Boora group,” he enthused before thanking everyone involved and asking them to “keep up the good work”.

Joe Ryan, of Bord na Mona, pointed out the “sentiment and goodwill of everyone towards this project has just been phenomenal.

“I think it is hats off to everyone including those in this group and the wider community, who have supported this project so far. I would like to echo what Tom's said when it is completed it is going to be a sight to behold and thanks again to everyone,” he added.

Sean Ganly, of Leamore Leabeg Development Company, explained that “all the funding is in place.

“However, it was delayed due to the weather conditions. Hopefully, we get a reasonable winter and spring. I would like to thank everyone involved. It is a fantastic project and hopefully, it will be successful and it will be the first of other stages of this project,” he enthused.

Linda Kelly, Kilcormac Development Association, noted how the KDA were delighted to be part of this exciting project. “It was a privilege to be able to sit at the table with such a great dynamic steering group, who were faced with many challenges along the way. But, each challenge was met with a good solution at the end of it and this is what has brought us here today.”

“Again, this type of project will not just benefit Lough Boora but it is going to benefit the wider community and many different communities who might not have an outlet or an area to go to that would be suitable for their abilities. This is going to be a very beneficial project to a lot of people. I am delighted to be here and thank everyone involved.”

Finbar Collins, later told the 'Tribune', that his late father, Tadhg had “working closely with Bord na Mona in Boora”. “He left money in his will and asked that something be done in this area. We didn't know what this was at the time until we met with Tom. We are delighted to support this project and they have seen the plans. What is going ahead is more than we could have imagined and is absolutely brilliant. We are delighted to be associated with it.

Meanwhile, the steering group also noted the support of St Brigid's Credit Union Clara / Ferbane, Bord Na Mona, Tullamore Credit Union and the Community Enhancement Programme 2020. The input from local community representatives and interested parties is also acknowledged. Persons with additional needs already enjoy and respond in a very special way to the parklands at Lough Boora. The creation of this sensory area will benefit not just these amazing people but anyone who wishes to stop and engage in a mindful way with the sounds, sights and touch of nature itself.