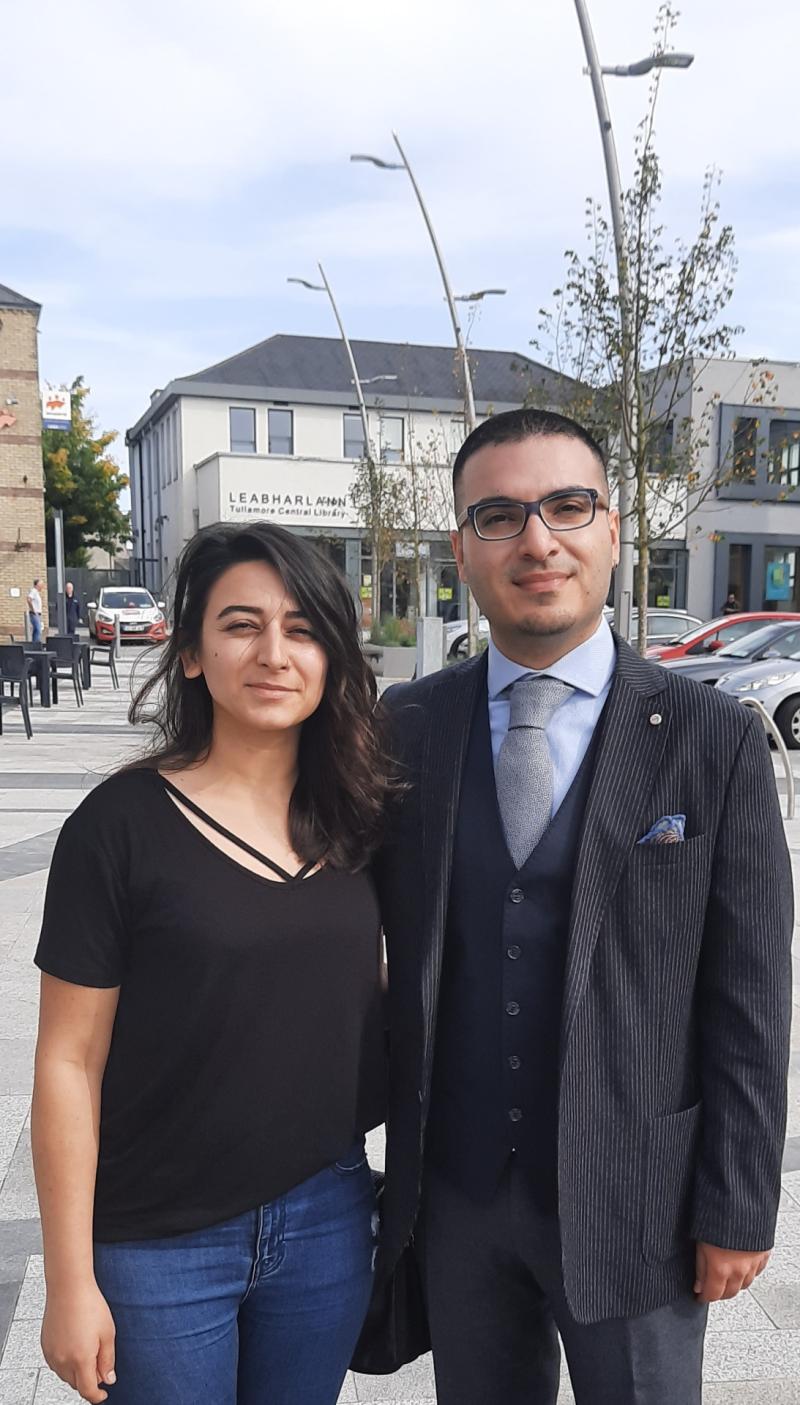 “The journalist who lives in Turkey and tries to tell the truth to society cannot think of a good career and life because poverty, death, assassination and the courts will be waiting for him.”

The frank response of Turkish journalist, Cagdas Gokbel, to the Tribune, when asked why he fled his country to seek asylum with his wife, Emine in Ireland.

The young, highly educated couple now live in the direct provision centre in the former Marian Hostel in Tullamore as they await the verdict on their asylum application.

They fled conflict and crisis in their own country and claim that the secular republic of Turkey has been 'completely destroyed' by the regime of premier Recep Tayyip Erdogan.

“Erdogan is dreaming of the Ottoman empire and since he came to power he has been rebuilding the country in that direction,” stressed Cagdas.

He explained: “The secular republic established by Mustafa Kemal does not exist anymore. The department of religious affairs has become more powerful and everything from the way people dress to what they drink in interfered with.”

He is highly critical of the Erdogan regime's recent decision to convert the Hagia Sophia, the landmark structure in the centre of Istanbul, into a mosque, a move which was met with dismay around the world.

He said the “young man or woman who wants to be a journalist in Turkey is seen as crazy.” “By some measure they are right,” he added.

While pointing out that journalists had been imprisoned and even killed in Turkey, Cagdas said “all these painful experiences have never taken me away from my journalistic dream.”

“I can even say they push me more to do something,” he stressed.

From Antalya, a city on the Mediterranean well known to Irish holiday-makers, Cagdas, pronounced Chadash, graduated from Istanbul Arel University's Journalism Department in 2015.

After graduation, the 28-year-old worked for a number of leading national media outlets in Turkey and currently reports from Ireland for the Independent Turkish service. He also serves as the Irish representative of the ATGB (European Union Of Turkish Journalists).

An expert in history and literature, Cagdas holds a Master's Degree, has published two academic papers and his first book will hit the shelves later this year.

He said that his work usually focuses on human interest stories and recalled a painful interview he conducted with the father of a friend who was one of 103 people killed in a bomb attack on a peaceful protest in the Turkish capital, Ankara on October 10 2015.

“His father could barely describe the pain they had experienced and the struggle for justice that had just begun for their son,” outlined the Turkish journalist.

He added that a journalist colleague, Hrant Dink was also killed at the door to his newspaper office.

Cagdas' wife Emine, who holds qualifications in English and Literature, is a member of the minority Kurdish community in Turkey.

Outlined Cagdas: “She suffers tremendously because she is Kurdish. She is a member of a people whose's identity and language have been repressed and denied. She goes by two different names, one that is Kurdish that her mother gave her and one that has been imposed by the Turkish state which is a Turkish name. I know that some of your readers can comprehend the meaning and weight of what I am talking about as we share similar experiences with Ireland.”

He said that Ireland's long tradition of “strong resistance” has long been a subject of much interest among intellectuals in Turkey.

He said that he did not consider any other country as an option for asylum other than that “of Thomas Clarke and James Connolly who organised the Easter Rising and lit the torch for the Republic.”

Cagdas also referenced another link between Turkey and Ireland dating back to the Great Famine in the 1840s when relief was sent by the Sultan to this country.

“Even though there is distance between us there are many reasons for our hearts to beat together. We were also occupied by the English and fought a great war of independence under the leadership of Mustafa Kemal. That's why intellectuals in Turkey have always had one eye on Ireland.”

Despite his knowledge of and obvious love for Ireland, he admitted that leaving Turkey was difficult and confusing.

But he said he and his wife have the “desire and excitement to work” once their asylum process is completed here.

Cagdas and Emine plan to travel the length and breadth of the island, once the coronavirus pandemic comes to an end, and “meet people in every region of Ireland, take note of their food, traditional clothes and culture.”

He added: “I firmly believe that we can achieve great things with the support and solidarity of the resilient and fighting Irish people.”