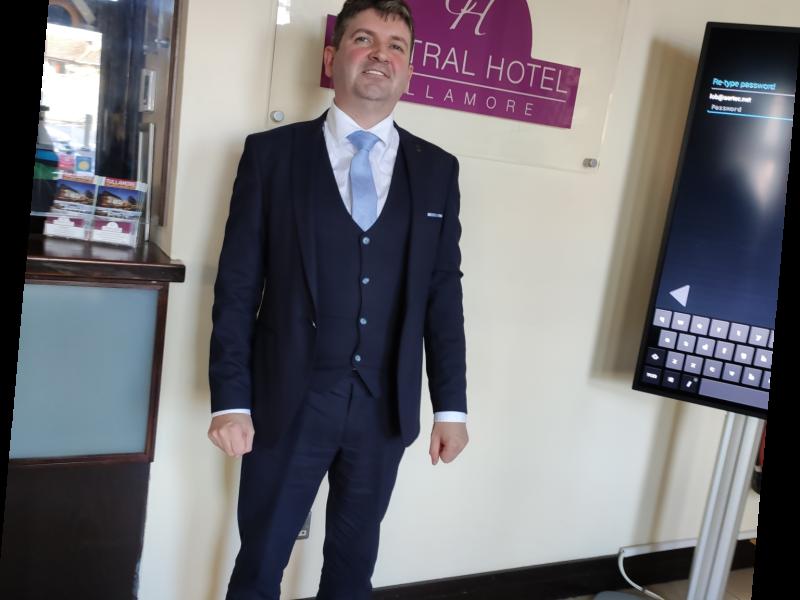 BRIAN Reynolds from Ballard, in Offaly, had just taken over the running of the Central Hotel on Main Street, Tullamore, when local lock-downs were announced in Offaly, Laois and Kildare. It was something of a baptism of fire for Brian who was only days into the job.

''We had absolutely no notice. So as you can imagine, we had our orders done for the weekend. We had come in on the Friday morning and we got notice that day that we had to close.''

The hotel suffered serious financial loss as a result of the closure as guests had to be contacted and bookings cancelled. ''We offloaded our fresh food to the Ken Smollen food appeal,'' said Brian.

He spent time in Killashee House in Naas before emigrating to the US, ending up in Times Square, New York, working in the bar trade.

Brian returned to Ireland in 2016 as his mother Patricia was unwell. She has since sadly passed away. On his return he worked in the Sheraton Hotel, Athlone, for three years before returning to...you guessed it... The Court Hotel,

Now he is the new manager of the Central Hotel and wants the hotel to be seen as very much part of the community.

''I want to build up a relationship with the town here. This is a family run local hotel. A lot of people have never been inside the doors here,'' said Brian. ''It's an exciting challenge for me. I'm very happy to have taken it and I'm looking forward to welcoming the locals in. We would love the support of all the locals out there,'' said Brian.

''We have recently started serving lunches on Thursday, Friday and Saturdays. We are starting off with the three days as there is no passing trade anymore, people are still working from home.

We will serve salads, wraps and baps along with tea and coffee. We are keeping it simple as everything has to be cooked fresh. If people are out for lunch from work we can get them in and out within an hour. We serve dinners Monday to Saturday. Everywhere has to be sanitised afterwards.''

The 62 bed Central Hotel is currently in the process of becoming a pet friendly facility.

''Our sister property in Athlone, The Creggan Court is pet friendly and is extremely successful. So we will be the first hotel in Tullamore to do that. Guests can bring their pet into the room. The pets won't be allowed into the dining room, they can sit in the foyer where the food is not being served.

I am a pet owner myself and pets can often be cleaner than humans,'' said Brian.

The hotel also has two meeting rooms which can be used for anything including classes providing social distancing guidelines are followed.

The hotel is a busy spot and last weekend it had an 81% occupancy rate. ''We get everyone from families to couples, to the building trade to carpenters. Sunday to Thursday it's a lot of tradesmen and on the weekend we have a lot of couples and families.

We are trying to add on to our packages, we have the 'Treat You Now' package which includes chocolates and flowers. We have teamed up with Birr Castle to do discounted rates for families going to Birr Castle. We are looking to team up with the cinema here [Omniplex] so that you can book your tickets while booking in here.''

What is it like in the hotel during this time? ''The major difference is social distancing. We encourage people to pre-pay so there won't be long queues or time wasted at reception. So it's paperless check-in and paperless check-out. All keys are sanitised daily. All the accommodation staff have had extra training in how to sanitise the rooms.

''When the rooms are sanitised there is a steel sticker put on the door and that is broken by the guest checking in. Guests staying for a couple of nights do not have their rooms sanitised unless they specifically request it. This is to limit the amount of people using the room.

We leave a bag outside the doors, with fresh towels and toiletries but if guests want their beds changed they can ring down to us and we will organise it,'' added Brian.

Brian also undertook Bord Failte Covid training and has a certificate hanging in reception indicating that.

''With travel restrictions in place we are doing everything to verify the addresses of people booking online or over the phone. We have to make sure they are on the Green List. If they are not on the Green List then they have to provide proof that they have quarantined for 14 days. Guests within Ireland are asked for their address too and also for proof that they are not coming from a county that is in lock-down. We are taking government guidelines very seriously

''Across Ireland they say bedroom bookings are down 67 per cent and they reckon that in November 88 per cent of hotel bedrooms are going to be empty which is very challenging,'' said Brian. ''But as a country we have to work together, and we do our bit here. We are doing everything on our side to keep our little country safe,'' added Brian.
Brian is now back living in Ballard with his father Tony and he is wished all the best in his new role in the Central Hotel.