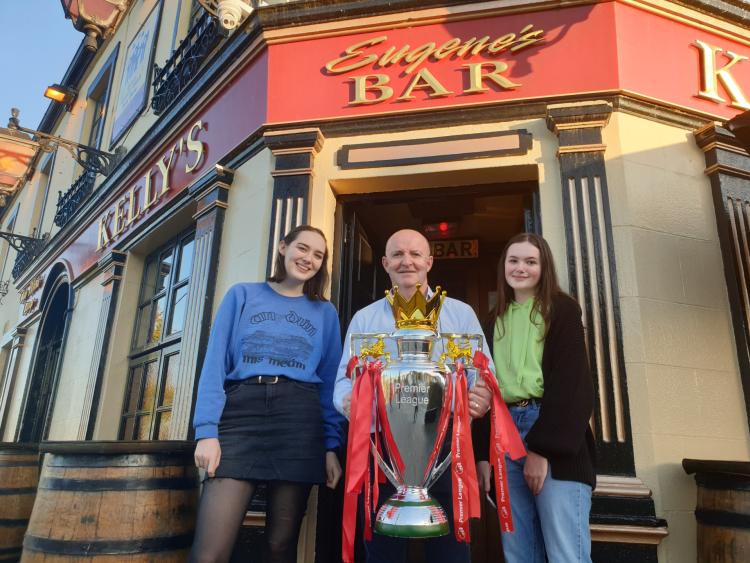 LIVERPOOL fan Eugene Kelly celebrated the reopening of his pub by welcoming the Premier League trophy to the popular Tullamore hostelry.

As a so-called 'wet' pub, Eugene Kelly's on Kilbeggan bridge was closed in March and when customers began returning last week they were surprised to see a special guest.

Eugene is a lifelong Liverpool supporter and was working as a barman in the former Pat's Bar (now closed) on William Street when the Anfield club last won a top-flight title back in 1990.

As ill-luck would have it, Liverpool's run to their first league in 30 years coincided with the Covid lockdown, meaning that Reds fans could not enjoy the triumph in their local.

“It's an awful pity that we couldn't get to do it, to celebrate it as the season went on and on,” said Eugene.

“The celebrations would have been crazy here after 30 years. But first things first, the priorities [were to] get everybody safe.”

Many customers enjoying a drink in the pub were delighted to get their photograph taken with the trophy.

The coveted silverware had made its way to Eugene's because of his connections in Edenderry, where businessman Pat McBride is close to former Ireland and Liverpool star John Aldridge, an English league winner in 1988 and FA Cup medallist in 1989.

“Every time that John Aldridge is in Ireland he comes to visit the pub with Pat, Pat being a very good friend of my nephew in Edenderry, Alan Usher.

“Alan is first of all a very staunch Edenderry Town stalwart, and then Liverpool over the years. I've been at matches in Anfield where I've met Alan and Pat.”

The Premier League trophy was in the bar at the weekend and remained there early this week, with interest peaking on Monday in advance of Liverpool's big clash with Arsenal.

That match on Monday night (which Liverpool won 3-1) brought back memories of the evening 31 years ago when Liverpool were poised to win the 1989 title before a late Michael Thomas goal brought the trophy to Arsenal.

“It's a long time since the night they lost it against Arsenal,” Eugene recalled.

“I was working in Pat's Bar at the time, I'll never forget that night. All we had to do was not lose by two [goals], and we lost by two.”

Eugene previously stated how unhappy he was at the closure of public houses which do not serve food so he was very glad to reopen with the required hygiene, distancing and tracing measures in place.

“It's brilliant to be open, back doing a bit of business. Back doing what I love. I'm in this pub 27 years,” he said.

“Every day I love it, get up in the morning looking forward to it. I've done what I feel is proper and right and I'm very happy and I'm actually delighted to see all my customers.”