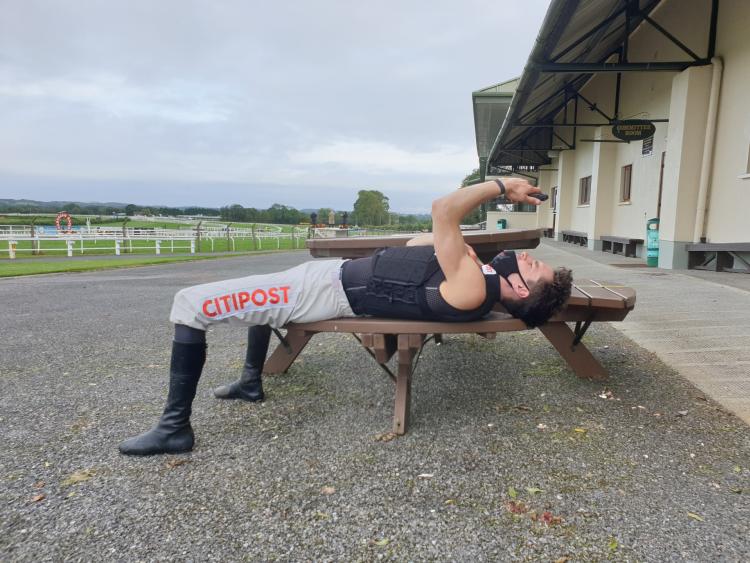 Socially distant: Jockey Danny Mullins looks at his phone during a break between races

NO punters pulling their favourites down the final furlong, no gasping crowd as the leader leaps the last, no bookies counting their cash as the bets are laid.

It's racing like you've never seen it before and for all those involved in an industry worth nearly two billion euros each year in Ireland, it's far better than an empty track.

One of the attractions of Kilbeggan was always the special atmosphere its attendance engendered, a unique bond which brought owners, trainers, riders and the ordinary betting public together for spring, summer and autumn evenings.

The pavilion and grandstand at the Loughanagore course offer panoramic views of the right-handed track, whose uphill finish has been challenging horse and jockey for many a year.

The Covid-19 lockdown earlier this year threatened to confine the animals to their yards, putting millions of euros of investment at risk.

So when racing got the all clear to return on June 8, albeit behind closed doors – even owners aren't permitted to attend – there was a collective sigh of relief.

“We've been fairly busy. Things have been a little bit different since we came back but thankfully we're still going,” remarked jockey Danny Mullins as he took a breather between races on Friday evening.

Speaking as he rested on a bench overlooking an empty betting ring, which itself offered a vista of the bare fields which are normally packed with cars, he was realistic about the new normal for riders on the circuit.

“For the jockeys it's not too bad, for the week to week stuff. Maybe the festivals are a little bit dull. There's just not that atmosphere,” said the Kilkenny man.

“But we're getting through it and hopefully things will start get back to normal before too long.”

One of his fellow jockeys, Shane Crosse, was facing into a two-week lay-off from Friday after becoming the first jockey in Ireland to test positive for Covid.

In accordance with racing protocols, the 18-year-old apprentice champion, who had no symptoms, was swabbed in advance of a trip to Doncaster.

He missed Friday's races in Limerick, has to pull out of the Doncaster St Ledger, and is also unavailable for the second day of the Champions Weekend at the Curragh on Sunday.

Not long after steering 7/1 chance Dedanann to third place in a maiden hurdle for trainer John Ryan, Danny Mullins fears for the future if the current restrictions remain.

“The fact that the owners can't come and see their horses, eventually they're going to start losing interest in the game so I suppose things just need to try and move forward. If we lose owners we lose horses and then racing starts to get hit.

“Any of us who are showing symptoms or are feeling unwell have to go and get your test. The IHRB (Irish Horseracing Regulatory Board) are doing a great job, they're very strict on it.

“They're getting onto us every day to keep up all the strict rules they have which is very good and it keeps the show on the road.”

Kilbeggan Races manager Paddy Dunican has worked hard for over 30 years to build the venue from just three meetings a year to within touching distance of ten.

“The most important thing of all is people's health. Covid is here and Covid is not going to go away for some time so the first thing is we have to put people's health and safety first,” he observed.

“We're very fortunate that the Government has allowed racing to come back under very strict guidelines. From our point of view the loss of the paying customer is a huge financial loss. You're looking at a loss of somewhere around 30% of your income.”

Fortunately, sponsors have stayed on board, even in the absence of the corporate outings which are so important to the sport's appeal.

There is no tote, no marquees, no bars and no cafe. The larger indoor spaces have been reallocated.

“The jockeys have taken over the self service restaurant, the stewards are in the bar and the [amateur] jockeys are in the other bar. And then inside in the main weighroom are the valets and they are all preparing the jockeys' gear and the jockeys just come in and pick up their gear and go again.

“So social distancing is observed everywhere and everyone is wearing masks. It's very different and very dead.

“Naturally of course we miss the paying customer but let's hope that Covid will go and we will be back to racing in Kilbeggan like the good old days, sooner rather than later.”

Kilbeggan Races treasurer Tom Lynam remembers more of those old days than most.

From the isolation of his station close to the turnstiles, he recalls volunteering at the course in the 1950s when furze would be cut by hand in fields nearby to build the fences.

He will celebrate his 77th birthday in advance of Kilbeggan's final race meeting of this strange year on October 12.

He couldn't even attend the first two meetings after racing resumed because over 70s were still cocooning.

“It's very dead and there's not much atmosphere but it's good to have it going. If was shut down it would be a disaster altogether, it's as simple as that.

“If the racecourses weren't keeping their places in shape and giving [owners and trainers] the facilities to do it they wouldn't have a chance of running the horses.

“There's eight races here today and they're nearly all full cards. So there's oodles of horses in the country so they have to have somewhere to go. It's keeping the industry going.

“Without the sponsors you couldn't manage. It's great the way the people are supporting it in spite of the downturn.”

But it is not the same. “It's unreal. It's like a wake out there. I looked out and all I could see was green grass, no sign of anyone.”