"Within one hour of meeting Canon Kerry I would have trusted that man with my life." 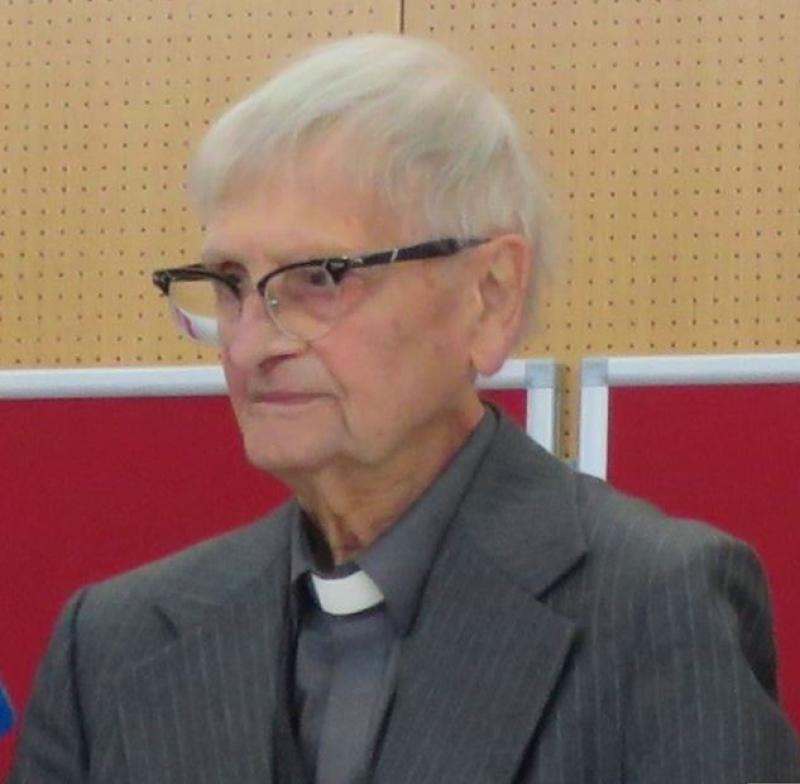 I MET Canon Kerry Waterstone in 1977 – a year after my ordination. That was not a good time for

Northern Ireland as ‘The Troubles’ were escalating.

In that year, the British Army were seeking to cede security to the RUC and the Peace People initiative was organised by Betty Williams, Mairead Corrigan and Ciaran McKeown (the two women won the Nobel Peace prize).

Incidentally, on January 11 that year, Michelle O’Neill, present deputy first minister of The Northern Ireland Executive was born. Peace was still a long way off.

Canon Kerry Waterstone had already made his name known in inter-faith dialogue between Catholics and Protestants.

In 1973 Canon Kerry Waterstone, a Church of Ireland minister, had exchanged pastorates with a

clergyman in Manchester, Connecticut. During their time in the United States, Canon

society had on their own sons.

Following his return to Ireland, Canon Kerry received a request from two congregations in

Connecticut to formulate a plan to help ease the tensions in Northern Ireland. After the

experience his own family shared in America, Canon Waterstone felt the attitudes of teens from

have learned to live together in their 'melting-pot' society.

The simple plan was to provide a place away from the pressures of peers and society where those teens who might become the future leaders of Northern Ireland could meet and come to know one another as individuals.

to secure the cooperation of clergy willing to help in the implementation of his plan. Forming

the original guidelines for the project, he focused on the prejudices and stereotypes that are the

That was where I came in. My bishop told me that “here was a Protestant clergyman taking Catholic children and Protestant children to America. This minister seemed a good man but I should monitor proceedings.”

Within one hour of meeting Canon Kerry I would have trusted that man with my life. He travelled like St Paul on a missionary journey – this time through America and founded 28 centres throughout the United States. Some lasted but a year, others withered – but a solid core of 14 centres have continued and every year they welcome 180 Northern Ireland teenagers to a life changing experience.

It cannot be measured but it should be bottled. It has a profound impact on young people. Not one has ever become involved in sectarian activity – some have become active politicians and professional people - all making a difference in Northern Ireland.

He had the stance of a leprechaun but he surely worked miracles in Northern Ireland from sowing seeds in young people who gained a confidence that never left them; a confidence to do good and make a country where suspicion evaporated, where people could meet and see they are no different than their neighbour.

I believe the present Northern Ireland peace accord arose from a Professor O’Malley of Boston University College who took protagonists off to South Africa - far away from hourly news bulletins, mobile calls home, a diet of daily death and mayhem. In that they experienced their common humanity, their hopes and their disappointments. In that process the peace process began.

I would contend further that Canon Kerry Waterstone perfected that mode of reconciliation a generation – 25 years – previously.

Jesus speaks of the Kingdom of God in sowing seeds – some grow, some don’t. Canon Kerry

sowed tens of thousands of seeds of peace quietly and really effectively. It is still there and it is growing in that confidence it never lost. May this true Saint of our time, rest in peace.

Canon AT Waterstone, who lived in Lynally, Co Offaly, was the Church of Ireland rector in Tullamore from 1964 to 1991, writes Gearoid Keegan.

A native of Kerry, and known to many of his acquaintances as simply 'Kerry Waterstone', he passed away on August 31 in his 98th year and his funeral took place at St Catherine's Church, Hophill, Tullamore last Friday with burial afterwards in Clonminch graveyard. He is survived by his wife Edie, his children Vici, John, Aidan, Mark and their families.

In a tribute, Bishop Pat Storey, Meath and Kildare, said: “Alongside his parish ministry one of Canon Kerry’s most notable achievements, along with his wife Edie, was to have founded the Ulster Project in 1975. It is a legacy that keeps on contributing to peace.”