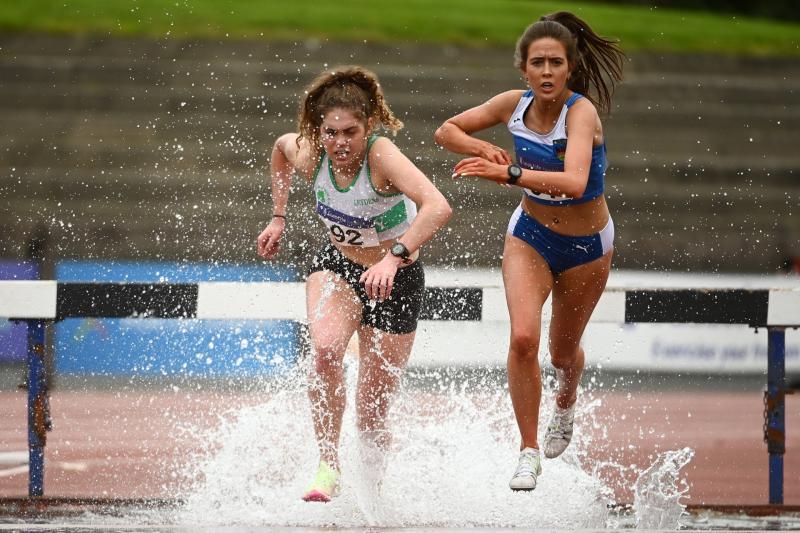 Emily Grennan (right) clearing the water jump on her way to bronze in the national 3,000m steeplechase final.

THERE were great celebrations for Offaly athletics in Santry Stadium today when two of their female athletes captured national medals.

And young Tullamore Harriers runner, Emily Grennan had an afternoon to remember when she took bronze in the senior women 3,000 metre steeplechase, setting a new personal best of 11.35.30.

With coaches, family members, supporters and club officials not allowed entry, there was a surreal atmosphere at the championships but there was a palpable sense of celebration in the air for the Offaly girls after their medal winning exploits.

A member of Birr Athletics Club, Hogan who is still U-23, finished ahead of Inny Valley's Casey Mulvey who had a best throw of 6.67 while third placed Zoe Mohan (Cushintown AC) was not far behind on 6.60. Incidentally, a Ferbane AC athlete, Laura Dolan set the national record for this event last year when winning the title in 6.94 but she didn't defend it this year.

Speaking after her win, Hogan spoke firstly of her delight that the championships were able to proceed despite the Covid-19 restrictions limiting gatherings and banning spectators. She also expressed her joy that the recent Offaly lockdown was lifted over a week ago, enabling her to compete.

“I tried to keep on top of my training. Walking, gym and stuff like that. My hard training has paid off,” she smiled, revealing that she kept training even when her participation was in doubt during the shutdown for Offaly, Laois and Kildare. Thanking her coach Michael Kenny for his work with her, she promised to train more next year for both the indoors and outdoors season.

It was also a huge day for Birr AC who were only re-established a few years ago but have built up a good sized membership and now have a national champion.

Emily Grennan's bronze medal was a real fairytale story. While there was just a field of four athletes in this final, the 3,000 metres steeplechase is one of the most glamourous races in athletics, a teak tough event that asks all sort of questions of athletes. Unsurprisingly, one of Ireland's top female runners, Olympian Michelle Finn, who has the qualifying standard for the Topko games next year, (Leevale AC) was a clear winner in 9.59.72 but Grennan challenged strongly for the silver medal with her 11.35.30 ten seconds behind the second woman home, Aoibhinn McGoldrick (11.25.51). Fourth placed Aoife Allen (St Senan's AC) was way behind in 12.43.40.

Grennan's success in winning a national medal was a real feel good story. Like all athletes she had to deal with the challenges of training in a Covid-19 curtailed environment for months since the initial shutdown last March. With club grounds closed at that stage for several weeks, Grennan continued to train consistently well, putting in plenty of hard miles on the Grand Canal greenway near her Rahan home – regularly accompainied by her mother on a bike.

Then when her club Tullamore Harriers reopened some weeks ago, she was able to benefit from the training at their weekly juvenile coaching sessions where she was asked to extend herself by several other excellent and promising young runners. However, it meant that she hadn't run a steeplechase race in over 12 months but she still ran a very steady race.

For the first five laps, she ran a very consistent 90 seconds for each lap and also dealt competently with the hurdles, especially the water jump. She dug deep in the energy sapping last kilometre as she ran beside McGoldrick for the first mile and a half before McGoldrick pulled away. Grennan, however, came back at her late on as McGoldrick visibly wilted over the last few jumps but her closing burst wasn't enough to get her up to silver.

A nursing student, she took up running at Killina Secondary School ten years ago when long serving Tullamore Harriers coach and a teacher, Tom Godley spotted her potential in a trial. She has become increasingly committed in recent years and no doubt, this performance will whet her appetite for much more.

Meanwhile two more of Tullamore Harriers' golden generation of young runners competed in the womens senior 800m at the championships. 16 year Emo student, Ava O'Connor did very well to reach the final where it was no surprise that she was down the field in 9th place in 2.12.66, just a second off her personal best. Ruby Steuven didn't reach the final, finishing fifh in her heat in 2.22.02 – O'Connor had qualified as a fastest loser from her heat after finishing third in 2.14.89. These finals, however, were all about experience for this duo and like Hogan and Grennan, they have exciting futures ahead of them in the sport with O'Connor having already competed at international level.

See Tullamore and Midland Tribune on Wednesday for a full sports section.