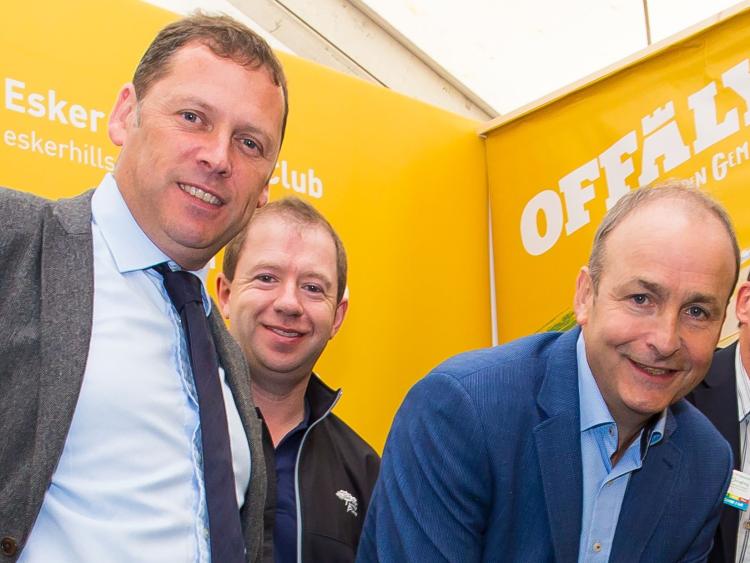 Barry Cowen and Micheal Martin pictured at the National Ploughing in Screggan, Co Offaly in 2016

TAOISEACH Micheal Martin this afternoon defended Agriculture Minister Barry Cowen in the Dail after revealing he had seen a copy of the garda file on the Offaly TD's drink-driving incident.

Mr Martin said he saw the file this morning and the incident “is not as portrayed”.

It had been alleged at the weekend that Minister Cowen had evaded a garda checkpoint on his way home from the All-Ireland senior football final in 2016.

Responding to that claim in the Sunday Times, Minister Cowen released a statement on Sunday morning.

“The Sunday Times has today published an article referring to an incorrect Garda record dealing with the incident which occurred on 18 September 2016 despite the fact that my solicitors wrote to the newspaper in advance of publication,” said Minister Cowen.

“I did not evade, or attempt to evade, a Garda. Such an act would constitute a serious criminal offence and I was not charged with such an offence. On being informed of its existence I sought a copy of this incorrect record and am taking steps under the Data Protection Act to have it corrected.

“This incorrect Garda record can only have come into the possession of the newspaper through a criminal act. It is a criminal offence for a member of An Garda Siochana to disclose any information obtained in the course of his or her duties. I am informed that An Garda Siochana has commenced a criminal investigation into the source of this leak.

“It is obvious that the disclosure of this information at this time in flagrant breach of the criminal law and my rights under data protection law is a disgraceful attempt to cause me the maximum personal and political harm.

“By publishing this story the Sunday Times has consciously participated in, and facilitated, this and I will be instructing my lawyers to take all necessary steps to vindicate my good name and data protection rights.”

A number of calls for clarification of the events of the day by Minister Cowen followed and Opposition politicians requested another statement from him in the Dail.

In a personal statement in the Dail, Minister Cowen said: “Formally on the record of this house, I sincerely, as I said earlier, want to apologise to my peers and my colleges.

“It is a source of deep regret. My actions have reflected poorly on the work of elected representatives and on my part.”

He was banned from driving for three months after being found to be over the alcohol limit when he was stopped at a checkpoint.

Aged 49 at the time, much of the focus during the following week was on his admission that he was the holder of a provisional licence when stopped.

Also last week, there were various allegations about the source of the original drink-driving story which was published in the Irish Independent.

Cllr Eamon Dooley, Fianna Fail, told the Tribune last week he believed an unelected party member with a “grudge” had leaked the incident to the newspaper.

The Ferbane councillor did not name anyone but said he had a “fair idea” who it was.

Separately, it was claimed that another named individual was the source but that allegation was denied.

The Sunday Times story changed the spotlight to the garda file on the matter and among those seeking “more clarity” from Minister Cowen was his cabinet colleague, Catherine Martin, Tourism Minister and deputy leader of the Greens.

In the Dail today, Taoiseach Micheal Martin said Minister Cowen “adamantly and strongly denies any suggestion or implication that he sought to evade any checkpoint”.

Speaking during Leaders' Questions, he revealed that Minister Cowen had shown him his copy of the garda record.

He said he had spoken to the Offaly man at length on Monday night and Minister Cowen remained very concerned about how information from the garda record was made public.

Mr Martin said he had spoken to Minister Cowen about the matter the weekend before last.

Speaking in the Dail, Sinn Fein leader Mary Lou McDonald said it was extraordinary that Mr Martin would stand over a Minister “who has made an incomplete statement on a matter of this importance to the Dail”.

Mr Martin said he was not aware of the PULSE record and did not see it until this morning.

“Just because a journalist says to somebody 'I have a source here, I have a paper that says X', I cannot work on that basis,” he said.

“Having seen the document, it is not quite as portrayed.”