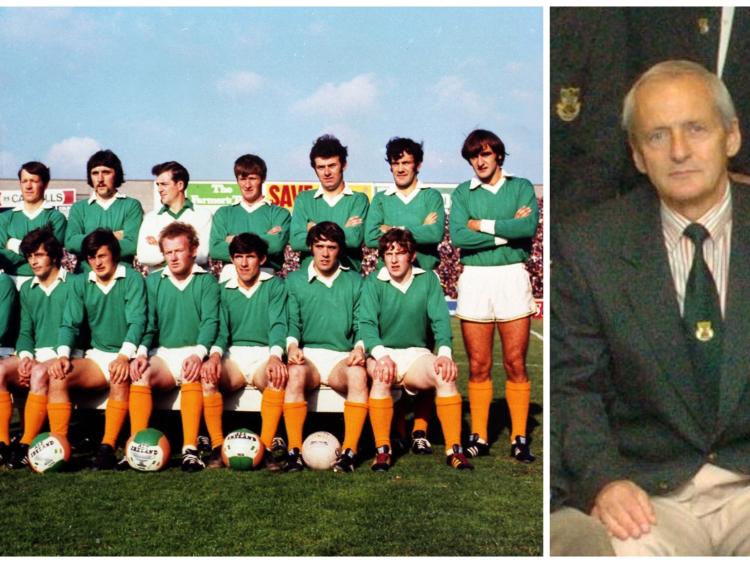 Yet another funeral that would have been vastly different had it occurred a few months ago, or possibly, a few months later.

The death of Tullamore GAA Club football hero Paddy Fenning last week, less than a year since his diagnosis with motor neurone disease, was greeted with great emotion and sadness in his home town and county.

An All-Ireland Senior Football Championship medal winner with Offaly in 1971 and 1972, his fortuitous second-half goal ignited the victory charge in the second half of the 1972 replayed win over Kerry. He won two Leinster U-21 football medals in 1968 and 1971, four Leinster senior football medals in 1971, ‘72, ‘73 and 1980, his last year playing for Offaly while he was especially proud of the two Offaly Senior Football Championship medals he won with Tullamore in 1973 and 1977.

A fiercely proud and passionate Tullamore and Offaly man, he was a fundraising giant – initially helping clear a Tullamore GAA debt on O’Brien Park and their Social Centre in the mid 1980s, he was a driving force behind several big local fundraising campaigns, including the CAT scan in Tullamore hospital, the Tullamore swimming pool and the Arts Centre, which has still not reached fruition.

Sadly, he didn’t get to see the end result of his final fundraiser, a big walk for motor neurone disease in Ireland and the homeless in Offaly – the walk on June 7 was postponed because of coronavirus restrictions and will be rescheduled while donations can be made on: www.gofundme.com/f/MNDwalk.

Just short of his 70th birthday, Paddy’s funeral would have been a gigantic affair in normal times with people from all over Offaly and the country in attendance. It had to be an essentially Tullamore affair because of the current funeral restrictions and even that was limited but there was a large turnout with Offaly teammates from the 1970s and 1980s making the journey into town to pay their tribute.

It was a very moving occasion as former colleagues and current members of Tullamore GAA Club flanked his cortege as it made its final journey from near his home of origin in Harbour Street, up the centre of the town via High Street and out to Clonminch.

People were, of course, able to remember Paddy in their own way and so many people had so made cherished memories. The proud husband of Kathryn McGlinchey and father of Barry and Amy, he was a deeply personable and charismatic man and made an indelible contribution to life in a variety of spheres.

Martin Furlong is one of the best qualified to talk about Paddy Fenning. Two fiercely proud Tullamore men, they soldiered together for club and county for years. While a short few years older than Paddy, Martin was great friends with him and despite living in New York since the late 1980s, him and his wife Katie remained in regular contact. They always visited Paddy and Kathryn at their Clara Road home a couple of times during their yearly visits home and these were something to look forward to.

“He was a remarkable man,” Furlong said from New York on Monday afternoon. “Apart from football at all, everything he did...The GAA Centre, hospital, swimming pool, arts centre, he did so much outside of his playing. We had good days. We had our disagreements too but he was still the best friend I had in Tullamore.”

One of Offaly’s most famous footballers and a legendarily tough goalkeeper, Furlong won All-Ireland senior football medals in 1971, 1972 and 1982, four All-Star awards and was footballer of the year in 1982. He spoke with infectious passion about Fenning’s qualities.

“He was as tough as nails. The harder you hit him, the better he liked it. He had some great battles with some players. They tore into him and he’d go back in harder the next time.

“Even in club football, he had great battles with players. Martin Dunne (Ballinagar) is one I know of. Paddy and Martin had rare battles and the two of them were as thick as thieves. Neither would hold back.

"Paddy would get the ball, go on a solo run and he’d dare you to take the ball off him. He would hold onto it until he had you beat. He had great battles with Pat O’Neill of Dublin. Pat Reynolds from Meath. Georgie Wilson of Dublin was another sticky little boy. Forwards tend to be ball players which they are but you have to have more than that and Paddy had guts to burn. There was no going back in him, that was one of his great traits.

“He was a great loyal friend, him and Kathryn. We were made so welcome in their house that it was unreal. Every time we would go back, we would go up there a couple of times, drinking coffee, shooting the breeze. Sometimes we would open a bottle of wine. They were fabulous friends. It is just heartbreaking to see him going. He lived a good lifestyle and you could say the same about Larry Coughlan, a fitness fanatic. Dermot Earley was another who died young and was so fit. Paddy would
drink a couple but he was not a big drinker, you would never see him falling around the place. He didn’t abuse himself. It is strange the way things work and you see lads who drank and smoked heavily all their life still around.”

Furlong has no doubt that Fenning would have been on the 1982 team if he was still on the panel and he spoke about the importance of him and 1971/1972 teammates, Eugene Mulligan, Kevin Kilmurray and Mick Wright to Offaly’s win in the 1980 Leinster Senior Football Championship.

“They were hugely important. 1980 was as tough a match as I or Offaly ever played in. That was a tough Dublin team. You go through them, Gay O’Driscoll, O’Neill, Tony Hanohoe, Brian Mullins, they were as tough as they came. Fenning loved that sort of a battle. I have no doubt had he stayed on, he would have been on the 1982 team. Tell me who was better? Paddy could run all day and the game was trending towards that. He had fitness and speed, he would have been in his element. It is a pity but we can’t rewrite it now.”

Pullough man Sean Cooney was an outstanding forward on the 1971 and 1972 All-Ireland champions and he smiled as he recalled his last meeting with Paddy Fenning earlier this year. Fr Nick Clavin, the centre back on that great team, was home from San Diego on holidays and him, Cooney and Seamus Darby, corner forward in 1972 and scorer of the winning goal in the 1982 All-Ireland final against Kerry, decided to visit an ill Fenning at his Clara Road home.

Cooney scored a goal in the drawn 1972 final against Kerry while Fenning got the game turning goal in the replay with a speculative ball in from fifty yards. The fun was only mighty as they exchanged banter over the goals. “I rang Paddy the day before, I collected Nick in the Derries (Rahan) and Seamus Darby was recovering from a car accident so the three of us called in. Kathryn came out and made tea and then disappeared and it was funny, we only scored four goals in All-Ireland senior finals (Murt Connor got the other goal in the 1971 win over Galway) and three of us were present that day. Paddy met us with a smile on his face.

"I told them that Fenning’s goal was originally from 35 yards but was extended to seventy over the years and we didn’t know how many times it hopped before it got into the net. It was a fluke and Darby’s goal was a push. I got the only legitimate goal in an All-Ireland final. Paddy said that whenever he kicked the ball, he went for goal, that he had nothing else on his mind. It was a great laugh.”

Cooney added: “He was a good player. For a small man, he was very strong and very stylish. He was a great man going forward with the ball. He was a great club man as well, he was a far better club man than a county man. He was a tearaway and he was good. I remember him playing on Brian McNiff of Donegal in the Grounds Tournament. Brian McNiff was one of the better backs at that time and Paddy destroyed him that day. I was a bit older than him but we were great friends. He was a nice fellow.”

Pat Heffernan was a Tullamore teammate of Fenning’s for most of the 1970s, winning Senior Football Championship medals in 1973 and 1977, and he said:

“Paddy was a great man for the club but for the town as well. Paddy was way ahead of most people. He was a very bright individual. When he planned something, he had it organised in his own mind first and then went and did it.

“He played for eleven years for Offaly and you had to be a very good player to do that in that era. He should have been still on the Offaly team in the 1981 All-Ireland final. He looked for a rest that winter and Eugene McGee never picked him again. In the 1981 final, Paidi O’Se (Kerry wing back) said where is Paddy Fenning. Whatever about 1982, he should have been there in 1981.”

Heffernan spoke about his importance to the Tullamore championship-winning sides of 1973 and 1977.

“He was one of the most important guys on those teams. His scoring rate was not all that high but his work rate was unbelievable. Mick Ryan (Doon) came to play with us in 1973 and he led the defence but apart from that, we had Paddy up front and he was the man.”

He added: “The things Paddy did. He took us out of debt in the 1980s. He was so far ahead of people that some people in power resented his excellence. He was brilliant. He brought a Tullamore group to America in 1985. Everything was organised and the only thing we had to do was bring pocket money. “

He concluded: “In the dressing room, there was great camaraderie between him and Joe Heffernan. They would always be talking across to each other. The two of them are gone now. He gave his all and he had to be good to be on that Offaly team.”