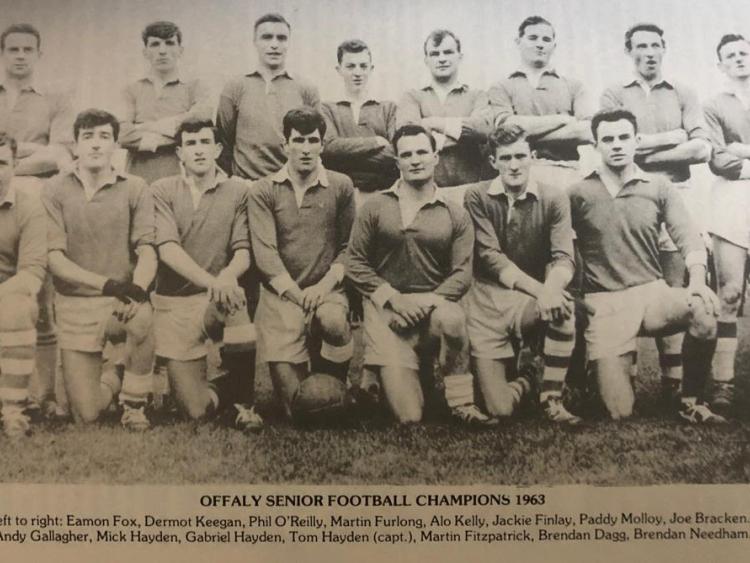 TULLAMORE GAA Club has expressed its condolences to the family of Paddy Molloy and all in Drumcullen GAA upon his recent passing.

One of Paddy’s many attributes as a hurler was his tremendous versatility, which also extended to his ability to excel in other codes, particularly Gaelic football.

When there was no football team in his parish, Paddy declared for Tullamore having been encouraged to do so by his county teammate Andy Gallagher. He was full-forward on the team that won our 21st Offaly Senior Football Championship in 1963, to go along with the four senior hurling titles that he won with Drumcullen.

Trailing Gracefield by six points at half-time in that year’s county final, Paddy netted the second half goal which put Tullamore in front and en route to a 4-6 to 1-8 victory. He also won an Offaly JFC with Drumcullen in 1973.

While hurling was naturally his first love, Paddy was very much a devotee and student of Gaelic football, telling Eddie Keher in his book ‘Hurling Heroes’, in which he was featured, that Peter Nolan of Clara was the finest centre-back he had ever seen and lamented his absence from the Offaly teams that went so close to All-Ireland honours in 1960 and ‘61, while also extolling the virtues of more modern day players like Trevor Giles, John McDermott and Padraic Joyce.

Though his time hurling with Offaly didn’t bring the accolades that his extraordinary ability merited, he was a regular on Leinster teams in an era when the Railway Cup retained all of its prestige, with Paddy featuring on winning sides in 1965 and ‘67, becoming the first Offaly hurler to achieve such a distinction.

He sits comfortably alongside the greats of Offaly hurling that enjoyed such remarkable successes in the 1980s and ‘90s, as evidenced by the fact that he was the only player from outside of that era to be selected on the Offaly Team of the Millenium in 2000, featuring at centre-forward, just one of many positions he was considered for.

“If anyone was born into the wrong era, Paddy Molloy from Ballinree in the parish of Drumcullen was such a man,” wrote Eddie Keher in 2000. “Though he may not have senior inter-county medals to show after his long and distinguished career, his achievement of gaining national recognition for his hurling displays with an unsuccessful team may be all the more admirable. I would love to have seen Paddy perform in a forward line with Pádraig Horan, Mark Corrigan or Pat Carroll around him, or on a later team with the Dooley brothers and John Troy, and with Brian Whelahan delivering pin-point passes to him from the half-back line.

“Paddy Molloy finished his career without any All-Ireland medals, but he left his mark firmly on the game of hurling. Apart from his achievements with the Leinster team, he was selected on the Ireland team in 1966, which was the forerunner to the ‘All Stars’. He was also honoured in his own county by being awarded the ‘Offaly Sportstar’ of the same year. He got a ‘Hall of Fame’ award in 1997. His selection on the ‘Offaly Team of the Millenium’ ensures that he will go down in history as one of the best 15 hurlers ever from the Faithful County, and that says it all.”