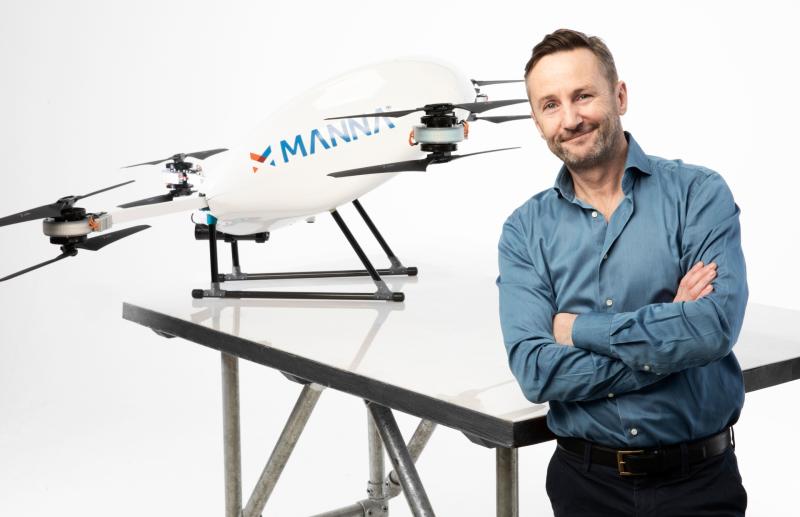 A drone delivery service is being launched to carry medicine and food to people forced to self-isolate because of the coronavirus as part of a trail project designed to show how autonomous drones can be used to beat the Covid-19 lockdown.

Manna Aero Ltd, the Dublin based company behind innovative project, will trial it in Moneygall using a drone built in south Wales where essential items will be transported by air to the customer's front door.

The autonomous battery powered drone will take off from a delivery station and will be capable of carrying up to 9lb (approx 4 kg) of goods over a four mile radius speed of up to 50 mph.

Once at the address, the drone, measuring 1.75 metres by 2.1 metres, is designed to hover nearby at a height of about 9 metres (30 ft) so that the recipient can acknowledge its presence on their smartphone.

Using cameras to guide it, the drone then finds a safe place such as a driveway or garden to lower the package from a cargo compartment to the person below it without landing.

Manna Aero said that it will operate up to 100 flights a day using a single drone. It has signed a deal with an unnamed pharmaceutical company, to launch the trial from Monday last while the service will be offered free of change.

The company had originally planned to test the technology by running a fast food delivery service in Dublin with Just Eat but this project was suspended because of the coronavirus outbreak.

The trial is believed to be the first full scale drone delivery service operating anywhere in the world. Other companies such as Amazon have developed similar technology but have yet to launch it.

The firm has been given permission by the Irish Aviation Authority to operate drones beyond human visual line of sight for the trial. Drone users are usually banned from flying devices further than they can see for safety reasons.

Speaking last week, Bobby Healy, the Chief Executive of Manna, said the project was targeted at the elderly and the vulnerable people, who have been told to stay inside their homes. “What they need is critical food supplies and prescriptions, medication and that is what we will deliver,” he said.

According to the company, it planned to use delivery drones across rural Ireland once the concept had proved successful and has identified almost 600 locations where similar services could operate.