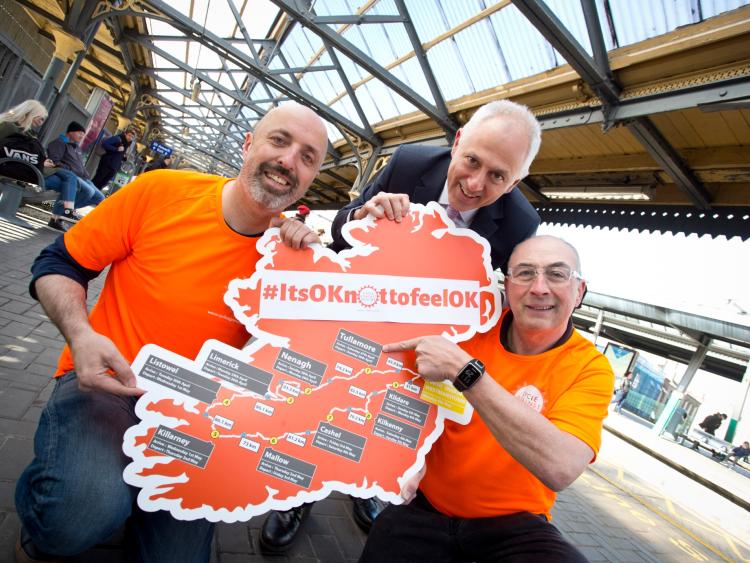 'Cycle Against Suicide' to roll into Tullamore this month

Registrations are now open for Cycle Against Suicide’s annual cycle, which takes place from April 27 to May 6.

It will pass through Tullamore on the April 27/28.

Cycle Against Suicide is an initiative to raise awareness of the help and support networks that are available to people across Ireland that are battling depression, self-harm, at risk of suicide or those bereaved by suicide.

At the launch with lead sponsor of the cycle, Iarnród Éireann, the organisation also announced its brand new social media initiative.

The #ItsOKNotToFeelOK Challenge will invite people from across the country to show their support for and promote mental health awareness by taking a photo of themselves holding a poster of the Cycle Against Suicide slogan, #ItsOKNotToFeelOK, and posting it on their social media channels, challenging their friends to get involved by tagging them.

Building on the foundation of awareness that Cycle Against Suicide cycle has raised through its national and community-based cycles over the years; the #ItsOKNotToFeelOK Challenge is aiming to get at least 800 people involved in the online challenge – one person to represent each kilometre of the organisations 800km annual Cycle – helping to address the subject of mental health and suicide prevention. Cycle Against Suicide is appealing to the people of Tullamore to get involved and take part in the challenge when the cycle is passing through their area.

The official 2019 route schedule and map are now live with the 2019 run mapped out as an 800km route that will pass through many towns and counties, rallying hope and support in localities around the nation.

During the cycle, participants will visit 20 schools, colleges and community centres promoting the organisation's key message, “It’s ok not to feel ok and It’s absolutely okay to ask for help” and highlighting the critical help available to anyone experiencing mental health issues.

Register as a cyclist, volunteer or homestay provider today and together, shoulder to shoulder, let’s break the cycle of suicide in Ireland.

To register your support or for more information on the Cycle Against Suicide #itsOKNotToFeelOK Challenge, visit www.cycleagainstsuicide.com.