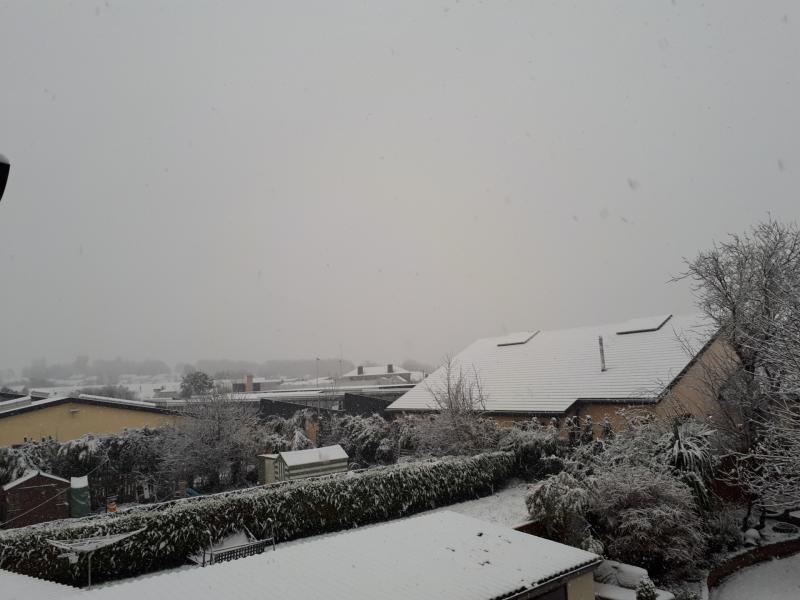 The wintry scene over Edenderry on Sunday, March 3

An unexpectedly large amount of snow has accumulated in Offaly as the cold weather that has collided with Storm Freya is bringing more snow than forecast.

Heavy rain has turned into extensive snow in the midlands with at times blizzard like conditions. Snow fell most of Sunday afternoon across Offaly.

Met Éireann predicted polar weather on Saturday evening with some sleet possible. Snow was not forecasted until Sunday morning when a Status Yellow warning was issued.

North to northwest winds with be strong and gusty at times near the south coast this afternoon.

The forecast says the last of the rain, sleet and snow will have clear to the east by Sunday evening and early tonight with strong northwesterly winds over parts of Leinster for a time.

It will then become dry in many parts of the country, however showers will affect western coastal counties overnight, merging to longer spells of rain towards morning, with a risk of hail.

Temperatures will climb no higher than minus 1 to plus 2 C with some frost and icy stretches. West to northwest winds will moderate, and back west to southwest by morning.

Showery rain will extend eastwards over the country on Monday morning, followed by a mixture of sunshine and scattered showers. Some of the showers will be heavy with a risk of hail and thunder. Top temperatures of 5 to 8 degrees in moderate to fresh and gusty west to southwest winds.

Showers will become confined to Atlantic coastal counties on Monday night and many places will be dry and clear for the night. Lows of 1 to 3 degrees with frost in places.

Tuesday will see few showers during the day but a good deal of dry and bright/sunny weather through the morning /afternoon. Highs of 9 or 10 degrees. Rain will spread northwards during the evening /night, with heavy falls of rain and local spot flooding.

Wednesday will start wet, particularly for the east of the country, and then a gradual clearance from the west through the morning/afternoon. Cold and windy for the evening/night in gusty northwesterly winds. Lows of 1 to 4 degrees; frost in sheltered places.