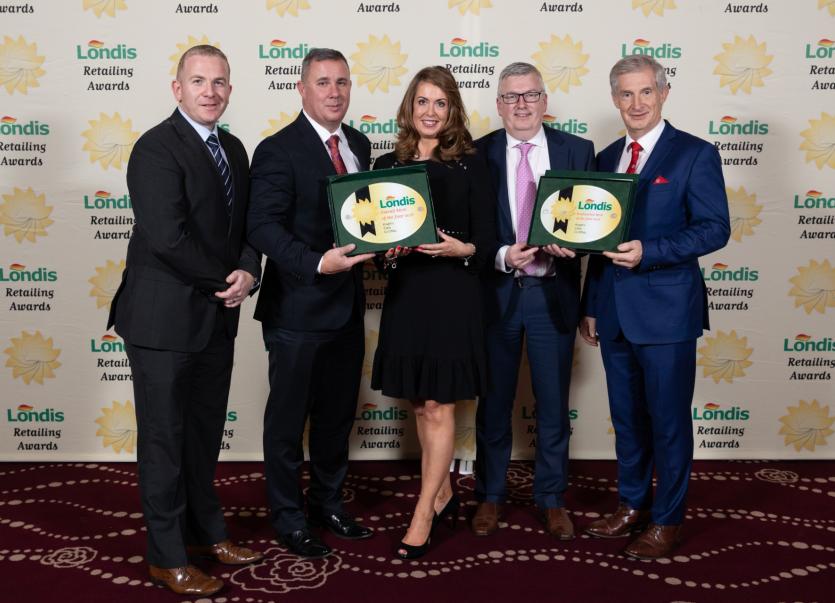 Knight’s Londis in Clara, Offaly has been named as the Overall Store of the Year at the annual Londis Retailing Awards 2018.

Londis retailers from every corner of the country, including Jim Campion and Pat Ryan of Knight’s Londis Clara descended on the Sheraton Hotel, Athlone in Co Westmeath for the 2018 Londis Retailing Awards recently.

Knight’s Londis Clara was also named as Foodmarket Store of the Year 2018 and was also recognised with a Retailing Excellence Award.

Congratulating retailers at the awards ceremony, Conor Hayes, Londis Sales Director said: “Londis retailers are at the heart of their communities around the country. It’s great to see the wealth of outstanding expertise demonstrated by Londis retailers and in particular the very worthy winners of the 2018 Awards."

“In the past year, the standards across the Londis retail estate have soared. The winners of this year’s awards are among the top retailers in the country. This award is recognition of the commitment and ambition demonstrated by these retailers to keep providing the highest level of service to their customers. Their focus on continually exceeding customer expectations is a testament to the hard work of their staff, for which they should be very proud. I commend them all on this wonderful achievement.”

Award recipients are selected after demonstrating outstanding industry excellence following a year of specialised audits conducted by retail specialists, SMA. The stores were independently examined across a range of criteria including customer service, the quality of their fresh food offering, product range, and the stores’ commitment to upholding the highest standards of hygiene and food safety.

Knight's received their award in recognition of their commitment to implementing exceptionally high standards throughout their store, thereby providing an excellent customer experience to their local community.

On receiving their awards the retailers said: “We are thrilled to receive this prestigious award which is a testament to the extremely hard-working team that we have in store."

"This accolade is not only a mark of pride for our store and staff, but importantly it shows our customers that we are passionate about delivering a top quality service. This is a very important point of differentiation in what is a very competitive marketplace and we’re honoured to have received this award.”