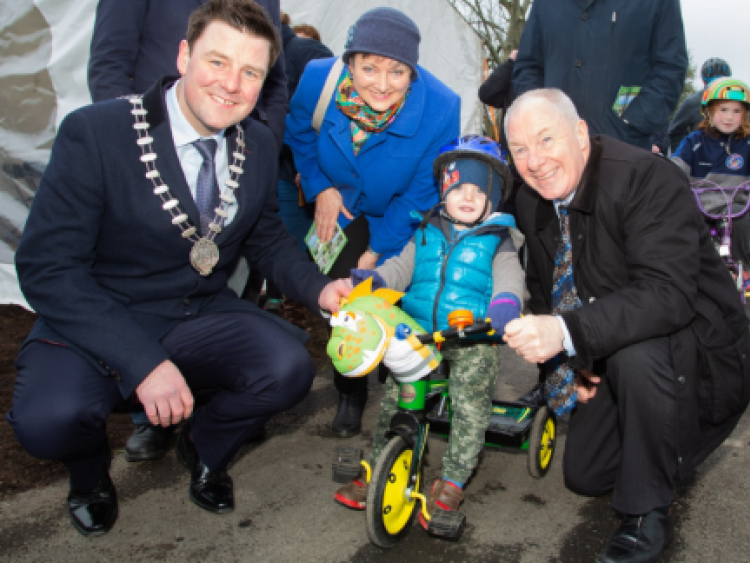 Offaly County Council has unveiled a new stretch of Greenway on the Grand Canal and revealed further plans to connect the county all the way to the West with similar projects.

A 4km stretch at Srah, Tullamore, was officially opened yesterday by Minister for Rural and Community Development, Michael Ring, councillors and staff from Offaly County Council and Waterways Ireland.

This latest 4km section was constructed in partnership with Waterways Ireland at a cost of €170k, funded from Offaly County Council' and an allocation from the Tullamore MD General Municipal Allocation.

The Council have since been allocated €550k by the Minister's department, which will be match funded by €167k from OCC to construct further sections east and west, and that work is currently underway.

It is an objective of Connecting People - Connecting Places, 2015, a Strategy for Walking and Cycling in County Offaly to extend the Grand Canal Greenway in Offaly from Edenderry in the east of the county to Shannon Harbour in the west, via Tullamore along the Grand Canal Towpath, a total of 71km.

A planning application is currently on public display for 33km of Greenway from Edenderry to Tullamore, with two more phases at pre-planning for 2018.

In addition to the 71kms of the canal mainline through Offaly, it is further planned to link the Grand Canal Greenway with the Royal Canal Greenway via the disused canal link from Ballycommon to Kilbeggan, in conjunction with Westmeath County Council and Waterways Ireland.

It is Offaly County Council's aspiration that in the future it will be possible to extend the Greenway all the way to Dublin
along the Grand Canal towpath in conjunction with Waterways Ireland and relevant stakeholders.

The Grand Canal Greenway is the main spine route in the proposed ‘Midlands Cycling Destination’ through Offaly, and is included in the Outdoor Recreation Plan for Public Lands and Waters in Ireland, 2017-2021.

It is hoped that this project will deliver a greenway link to the River Barrow via Portarlington, to Clonmacnoise, Shannonharbour, Banagher and Athlone through west Offaly and many more connected routes.