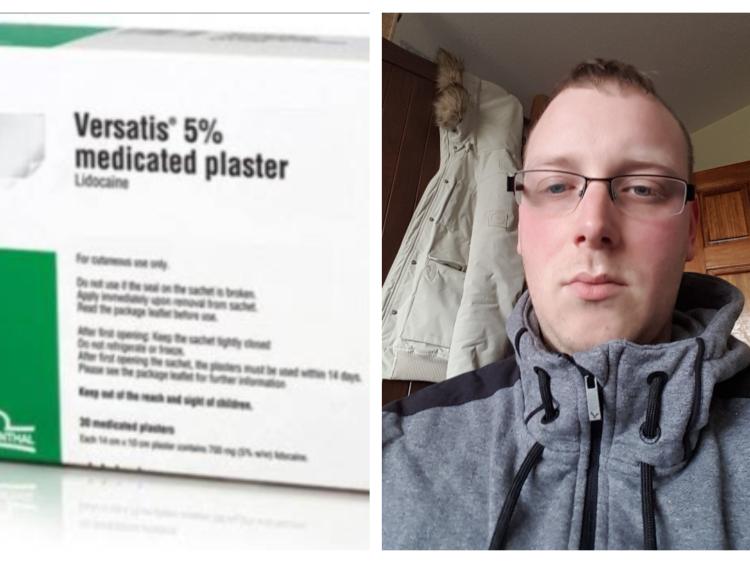 Offaly man Séamus Eustace has implored the Minister for Health, Simon Harris and the HSE to re-instate Versatis patches to the Drug Payment Scheme.

Versatis patches, originally used for post-shingles pain, were removed from the Drug Payment Scheme due to there cost when it emerged that per head of population, ten times as many people were using them in Ireland as compared to the UK.

Most of them are 25,000 people affected by chronic pain which can be caused by a myriad of things, including accidents, surgeries and certain conditions. Patients use the patches for pain relief.

"I’ve been suffering from widespread chronic pain for the past four years," he told us. "The pain and sensations vary from a hot burning knife stabbing into you, a dull ache, to the feeling of ants crawling under your skin," he continued.

"My pain initially started when I turned around quickly in the car and felt a pull in my neck, like a pulled muscle," Séamus said.

He didn't think anything of it at the time and says, "I thought I would be back to normal within a few days." A couple of weeks passed, and for Séamus, the pain just got worse and started to move through his whole body.

After trying all the alternatives, he said that the Versatis patches seem to be the only thing that ease his pain. "They don’t get rid of the pain entirely but dull it enough to make it bearable," he commented.

"The patches are a necessity for myself and other chronic pain sufferers to help control our pain. Without these patches I've no other choice but to increase my opiate intake and that isn’t really an option or the best way to deal with the pain."

Séamus would like to see the patches reinstated on the Drug Payment Scheme/Medical Card as the suggested alternatives have not worked for him or the vast majority of people suffering chronic pain.

"In my opinion, this is a human rights issue; removing something that can help our pain, has little or no side effects, with little or no notice," he added.

He went on to say that people are holding onto their last few patches for an extremely bad flare up. "We are limping around suffering, cutting what we can afford into small sections for a small bit of relief."

"This is not how we should be expected to live. We are being forgotten about once again and being left to suffer and deal with it."

"Both Simon Harris and Professor Michael Barry have been instrumental in the process of removing these patches from the reach of people who suffer chronic long-term pain, without consultation with patients. We should not be left to suffer like this," Séamus concluded.

Sufferers have launched the #PatchUsBackUp campaign on Facebook and Twitter and are asking for as many people to sign the petition to Minister Simon Harris, Prof. Michael Barry, HSE & An Taoiseach Leo Varadkar in order to get these patches reinstated.

The petition, which already has over 7,400 signatures, can be supported here.