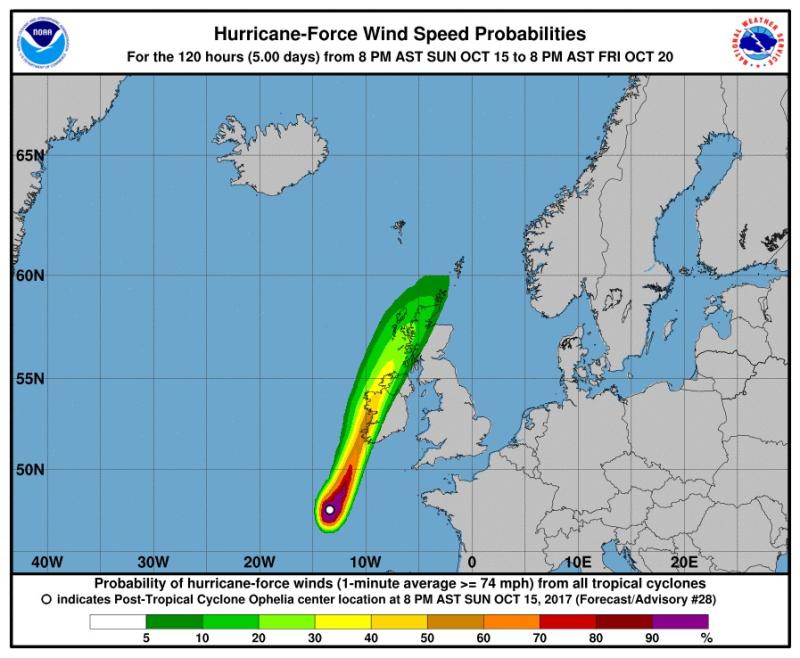 HURRICANE OPHELIA has change course slightly and the Status Red alert remains in place for what will be a powerful storm with hurricane force winds.

Reports overnight from the National Hurricane Centre in the United States showed the storms path moving west and a reclassification of Ophelia as an ex-tropical storm. Despite the expected weakening, the post-tropical cyclone is still likely to bring hurricane-force winds, especially in gusts, to portions of western Ireland on Monday.

It US authorities said is also important to realise that a tropical cyclone is not a point. Their effects can span many hundreds of miles from the centre. The area experiencing hurricane force (one-minute average wind speeds of at least 74 mph) and tropical storm force (one-minute average wind speeds of 39-73 mph) winds can extend well beyond the areas enclosing the most likely track area of the centre. 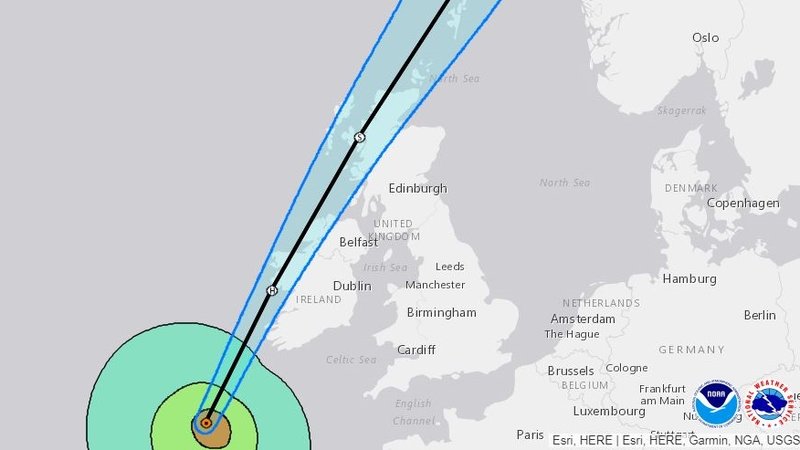 This is the latest report from the US National Hurricane Centre in Florida.

Within just the past six hours, the last bit of deep convection
near Ophelia's center has been sheared off well to the north, and
the cyclone has acquired a definitive extratropical structure.
Ophelia has completed its transition to an occluded low, with an
attached warm front extending northeastward across Ireland and a
cold front draped southeastward toward Spain and Portugal. The
powerful cyclone continues to produce hurricane-force winds, with
recent ASCAT data showing wind vectors as high as 70 kt to the east
of the center. Based on these data, the initial intensity remains
75 kt to account for undersampling. The occluded low is forecast to
gradually fill and weaken during the next couple of days, and it is
likely to dissipate near the western coast of Norway by 48 hours.
Despite the expected weakening, the post-tropical cyclone is still
likely to bring hurricane-force winds, especially in gusts, to
portions of western Ireland on Monday.

Ophelia has accelerated and retrograded slightly during the past
6-12 hours during the occlusion process, and the long-term motion
estimate is northward, or 010/38 kt. Now that occlusion is
complete, the post-tropical cyclone should resume a north-
northeastward motion, with some decrease in forward speed, within
the next 12 hours. That heading should continue for the ensuing day
or two, bringing the center of the cyclone near the western coast of
Ireland on Monday and then near northern Scotland Monday night.
The dynamical track models remain in good agreement on this
scenario, and the updated NHC forecast is not too different from
the previous one.

This is the last advisory issued by the National Hurricane Center
now that Ophelia has become post-tropical. Local forecasts,
warnings, and other communications regarding the post-tropical
cyclone that are pertinent to Ireland and the United Kingdom will
continue to be available from Met Eireann and the UK Met Office.

1. Ophelia will remain a powerful extratropical cyclone with
hurricane-force winds while it moves near Ireland and the United
Kingdom Monday and Monday night. Strong winds and heavy rain are
likely in portions of these areas, along with dangerous marine
conditions. For more details on the magnitude, timing, and location
of impacts from post-tropical Ophelia, residents in Ireland should
refer to products issued by Met Eireann, and residents in the
United Kingdom should refer to products issued by the Met Office.

2. Individuals are urged to not focus on the exact track of Ophelia
since strong winds and heavy rainfall will extend well outside of
the NHC forecast cone.