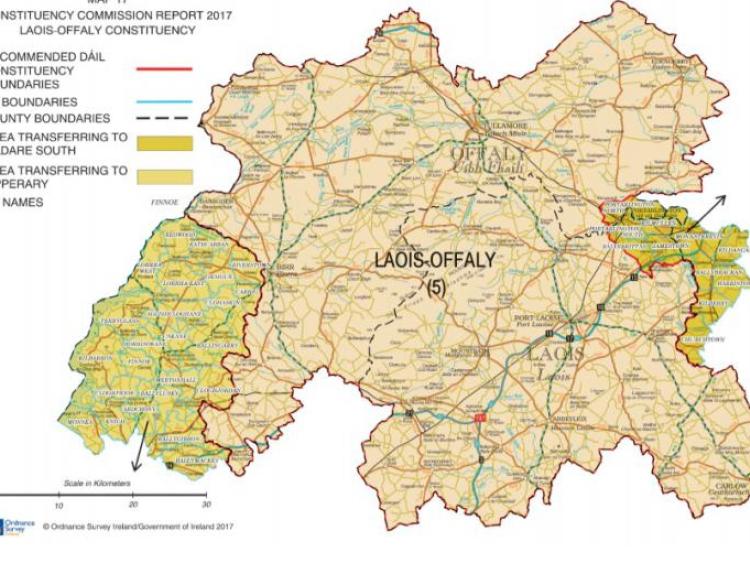 A campaign to stop several thousand Laois and Offaly voters being forced to vote for Kildare politicians at General Elections is set to start in Portarlington.

The Fianna Fáil party in Portarlington has called a meeting to discuss the recommendations of the Constituency Commission which would see a population of more than 12,500 in both counties hived off to Kildare.

In the process Kildare South will now have four TDs in the Dáil and bring to eight the number of TDs for Kildare. Kildare's gain would be Laois-Offaly's loss. The commission also recommended that Laois and Offaly would be reunited and revert back to five seats. Most of the voters would be taken from Portarlington which sits right on the Laois-Offaly border.

However, Fianna Fáil in Portarlingon is not happy on both sides of the border. Apart from Laois and Offaly voters in the town, a large swathe of Portarlington's hinterland will also be broken away from Laois. Villages lost to Kildare include Killenard and Ballybrittas. It would break a link with parts of Offaly to the north of the town.

Willie Murphy is party chairman for the Laois side of the border town.

"Portarlington will suffer," he said.

He said next week's meeting would be the first of many. He hoped the next step would be a full public meeting to which all parties would be invited.

"This is where the campaign starts. I don't know what we can do but let our voice be held. Somebody has to put up a fight," he said.

Fianna Fáil TDs from Laois and Offaly, Sean Fleming and Barry Cowen have been invited. Also due to attend are councillors for the area including Paschal McEvoy, Eddie Fitzpatrick and Padraig Fleming.

The meeting has been called for 8pm the East End Hotel next Monday, July 17.