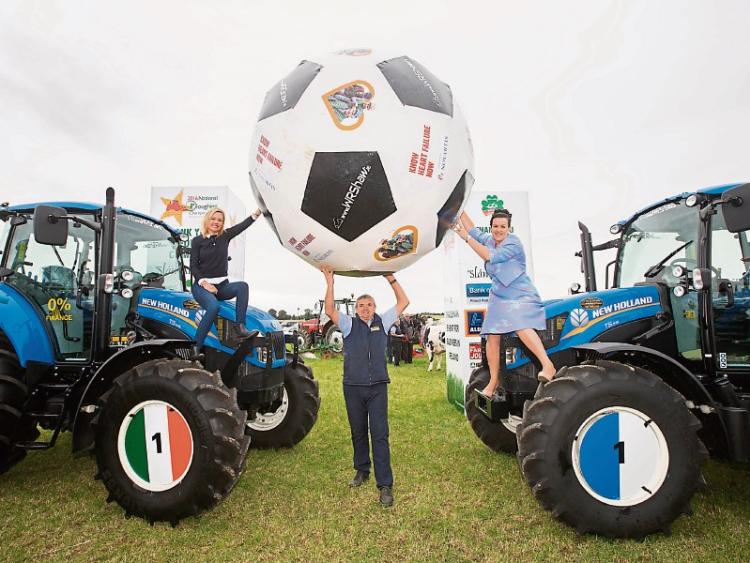 Ireland’s favourite sport commentators will take on a new challenge today at the National Ploughing Championships; Heart Failure Tractor Football. A first of its kind for the farming community, and the broadcasters, Marty Morrissey will battle it out on the tractor pitch for the Ploughing Live Show, all in aid of Heart Failure Awareness.

Marty will be joined by broadcasting legend Michael O’Muircheartaigh, and sporting hero Michael Duignan, who will commentate on the rival three-a-side tractors each day for the enjoyment of spectators. This unique event will see WR Shaw New Holland tractors ‘kicking’ the massive seven foot football through the posts to score for their county side, Laois versus Offaly.

Professor Ken McDonald, Consultant Cardiologist and National Clinical Lead for Heart Failure said, “Heart Failure occurs when the heart is weakened and can’t pump enough blood around the body, it is very common but often misunderstood and under-diagnosed. This campaign aims to encourage discussion of the signs and symptoms, particularly among the farming community, and to show that our heart health needs to be prioritised.”

Heart Failure is a serious but manageable condition that affects approximately 90,000 people in Ireland, with up to one in five people at risk of developing Heart Failure at some point during their lifetime.1,2,3 One in three people in Ireland mistake Heart Failure symptoms for signs of aging, and one in four wait a week or more to seek medical advice when experiencing these serious symptoms.4

Loretto Callaghan, Managing Director, Novartis Ireland Ltd., “We all know how demanding life can be, especially for those working in the farming industry who often put their work – and tractors – ahead of their own health. We are excited about the first Heart Failure Tractor Football Tournament and hope this makes everyone at the Ploughing think about their own heart and visit the Know Heart Failure Now stand for advice on looking after their heart health.”

Everyone attending the National Ploughing Championships can get involved in the Know Heart Failure Now campaign. Here's how:

·         Come to what promises to be one of the biggest and most exciting events at this year’s Ploughing Championships, the Laois V’s OffalyHeart Failure Tractor Football Tournament and see representatives from both counties fighting it out to win the coveted cup (for times see notes below)

For more information visit the Know Heart Failure Now stand in the Health and Wellness tent at the National Ploughing Championships, Tullamore, Co. Offaly from 20th – 22nd September 2016 or go to www.heartbeat-trust.ie / www.croi.ie.