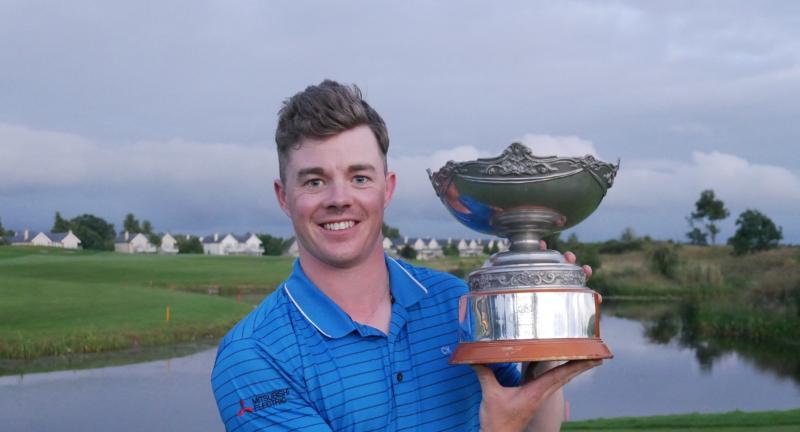 Stuart Grehan with his trophy

STUART Grehan had one of his biggest golf wins as a professional when he came out on to at the K Club Pro-Am last week.

It is one of the biggest events on the Irish PGA circuit with its biggest prize fund, a significant €100,000. Grehan won the first prize of €20,000 after playing superbly consistent golf on the renowned Straffan course – they played one round each on both north and south courses..

The Tullamore man shots rounds of -5 67 and -6 66 to just edge the win on -11 – he was one shot ahead of his name sake, Liam Grehan from the home club and they were well clear of the field with the third man, Richard Kilpatrick well back on -4.

Grehan took a one shot lead at the end of day one and withheld Liam Grehan's stern challenge as he also had a -66 in the second round.

Two other Offaly golfers also competed. Ferbane native Bernard Quigley, the former professional in Tullamore Golf Club but now in Naas, was 68th on +15 while Daingean man Brian McCormack was 78th on +17.

It was an important win, his biggest payday, for Grehan who turned professional in 2017 after a fantastic amateur career. He captured some of Ireland's biggest prizes during his amateur career. A former member of Tullamore Golf Club, he won the East and South of Ireland Championships as well as the Irish Youth Championship. He also won the Mullingar Scratch Cup, a competition won by some of Ireland's most famous golfers including Shane Lowry, and his dream of playing in the Walker Cup was ended by a freak broken arm, sustained while playing a lunch time game of soccer.

Since turning professional, he has struggled to make a big breakthrough. He hasn't managed to win his card on the full European Tour while he has played in competitions on the subsidiary tours, the Challenge and mainly, the Euro-Pro. He has enjoyed success in various competitions but the K Club represented his biggest pay date.

He has competed on the Euro-Pro Tour this year and has got into the prize money on four occasions with the biggest at the Ignis Management Championship in Telford Hotel, Spa and Golf, England where he won £455 after finishing joint 24th. His highest finish on the Euro-Pro tour was second at the Motocaddy Masters in Frilford Heath in May 2018 when he won £6,000.

When he turned professional, Grehan stated that he would give it ten years before considering his career options and he remains fiercely dedicated to the game.

The K club win will do his confidence a lot of good as well as earning valuable money.