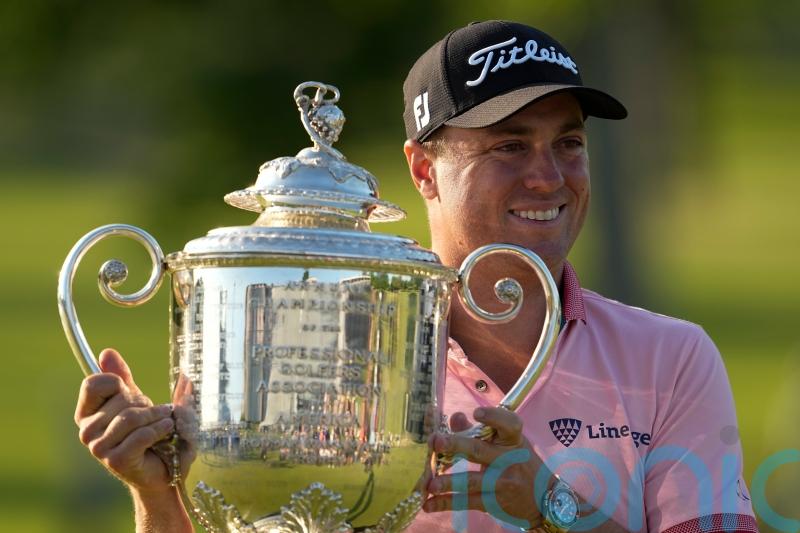 Justin Thomas hailed the value of experience after beating Will Zalatoris in a play-off to win his second US PGA Championship following a dramatic climax at Southern Hills.

Justin Thomas hailed the value of experience after beating Will Zalatoris in a play-off to win his second US PGA Championship following a dramatic climax at Southern Hills.

Chile’s Mito Pereira held a one-shot lead on the 72nd hole after seeing his birdie putt on the 17th stop agonisingly short of the hole, but pushed his drive into the creek and ran up a devastating double bogey.

That left Thomas and Zalatoris to contest a three-hole aggregate play-off and Thomas birdied the 13th and 17th and parred the 18th to lift the Wanamaker Trophy for the second time, having started the day seven shots off the lead.

The former world number one therefore equalled the biggest comeback in US PGA history, John Mahaffey coming from seven behind Tom Watson after 54 holes to defeat Watson and Jerry Pate in a play-off at Oakmont in 1978.

While Pereira, Zalatoris, Cameron Young and England’s Matt Fitzpatrick were all trying to win their first PGA Tour title, never mind a maiden major, Thomas had 16 wins under his belt before making the trip to Tulsa.

Asked how much his experience came into play, the 2017 winner said: “A lot. It definitely did come in those last three or four holes.

“I kept telling myself I’ve been here before. Although it’s been five years, it’s somewhere down in there.”

Round of the day

Thomas began the day seven shots behind Pereira and was eight behind after his first eight holes, but played his last 10 in four under.

Shot of the day

Thomas drove the green on the second play-off hole, the par-four 17th, to set up a decisive birdie.

Tiger Woods, who withdrew after his third round of 79, congratulates good friend Thomas on his win.

Statistic of the day

When is the next major?

The US Open takes place at Brookline Country Club from June 16-19.