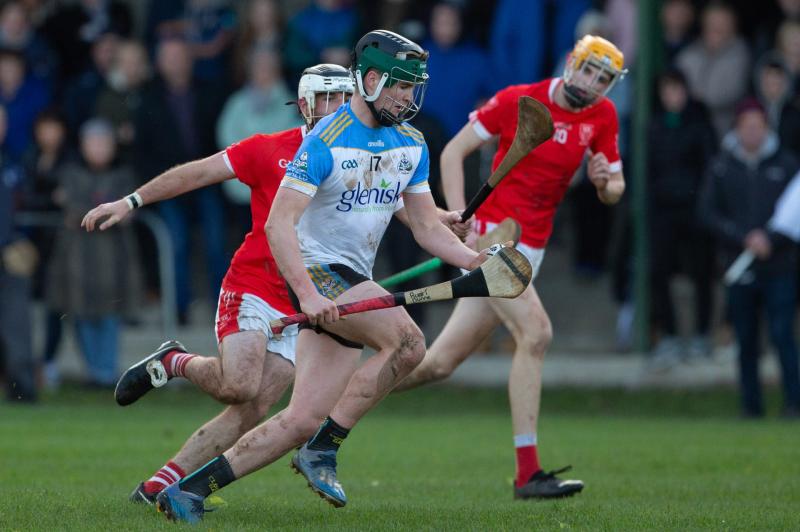 CLODIAGH Gaels staged a sensational second half turn around to stay alive in the Leinster Club Intermediate Hurling Championship in O'Connor Park on Saturday afternoon – setting up an away quarter-final against the Wexford intermediate champions, Oylgate Glenbrien next Saturday.

Trailing by 1-10 to 0-5 at half time, down to fourteen men after losing midfielder Cathal Curran to a second yellow card in the 19th minute, Clodiagh Gaels may have had the wind to come but were so out of sorts that if was difficult to envisage them coming back,

Yet they turned it around with an excellent second half display, full of fire and determination. They did get the benefit of good luck. Kildalkey gifted them a very soft goal at the start of the second half and that gave them a lifeline. The wind was also much more influential in the second half, blowing right behind Clodiagh Gaels' backs into the Park Avenue end and getting stronger by the minute.

Despite that, Clodiagh Gaels also raised their performance level several notches. They were much more focused, clinical and made less errors. They became so dominant that it seemed they had the extra man and while it went right down to the wire, it was clear from the three quarter way stage that this was the Killeigh-Killurin outfit's game to lose.

They got in front with five minutes left and while extra time was a possibility, Kildalkey had shot their bolt. As Clodiagh Gaels got more and more on top, the Kildalkey error count increased and they simply couldn't get their hands on the ball.

Dylan Hyland was quite brilliant in the Clodiagh Gaels' defence, inspiring all around him while Peter Walsh and Joey Keenaghan were also excellent at the back. Clodiagh Gaels had to battle hard at midfield Patrick Potterton cut loose for much of the first half and continued to thrive early in the second half. Ruari Dunne did well when he settled while Liam Langton got on crucial ball when he moved out the field,. The Clodiagh Gaels' attack replied mainly on Dwayne Dunne frees and nine of his ten points were from placed balls. Liam Langton did a lot of good work for Clodiagh Gaels, even if it was not a perfect display by him. Conor \Langton picked off two good points and on a day when scores from play were hard earned, these were crucial. Credit also to centre forward Cathal Brady was a very honest, hard working hour.

Kildalkey were much the better team from the throw in and Clodiagh Gaels could get very little going in the opening quarter. The home side got the first point from Dwayne Dunne with a first minute free but by the same time Dunne got their second in the 11th minute, Kildalkey had four points on the board. Three of those came from midfielder Patrick Potterton who ran riot early on before Clodiagh Gaels tighetened up on him.

Things were to go from bad to worse for Clodiagh Gaels. Conor Kearney slotted over two frees and then Nicholas Potterton got in for a very well taken goal in the 17th minute after a slick passing move took Kevin Kinahan out of the goals and left the net unguarded. In the 19th minute Cathal Curran was sent off for a second yellow card, picking up both within a couple of minutes of each other, and Kearney pointed the free to make it 1-7 to 0-2.

Clodiagh Gaels improved after this and began to move with more purpose. Dwayne Dunne got a point that should have been a goal while Liam Langton got a brilliant individual point from midfield, dummying his opponent and striking over on the run without catching the ball. Still, they were fighting an uphill battle and Kildalkey were full value for their 1-10 to 0-5 half time lead.

Clodiagh Gaels got the break they needed at the start of the second half with what looked to be an own goal – Kildalkey goalkeeper Mark McCormack hestitated before coming for a long Liam Langton ball and it then appeared to bounce off him across the line. With the wind gaining in ferocity Clodiagh Gaels piled on the pressure and they had the gap back to two points before Conor Kearney got Kildalkey's first second half point from a free.

It looked like Clodiagh Gaels had the extra man at times and they were winning all the individual battles. With Kildalkey now struggling all over the field, it was a one point game at the second half water break and when Dwayne Dunne levelled up from a free, 1-11 each, just after the resumption, the odds very much favoured the Offaly men.

Kildalkey edged back in front with a Patrick Conneely free but Clodiagh Gaels could not be denied. Dwayne Dunne levelled from a free and then got them in front with a 55th minute free. Kevin Kinahan did very well to catch a Conor Kearney free from the half way line, that was just over crossbar height. With the game deep in injury time, Dunne gave Clodiagh Gaels a two point lead from another free and it meant that James McNally's late point for Kildalkey was immaterial.

Dylan Hyland (Clodiagh Gaels): A permission player from Raheen, Dylan Hyland was a key factor in Clodiagh Gaels win. Not only did he man the fort with great bravery when the pressure was on in the first half but he really inspired his team mates in the second half. He got out in front to the ball, tore out with it and gave great clearances. He raised the crowd, his team mates and he had a really superb game.

Clodiagh Gaels' goal at the start of the second half turned this game. It was soft and possibly an own goal but it changed everything here.

Conor Daly had a steady enough game, even if both sides could complain at some of the frees given against them.

Once again, the O'Connor Park pitch held up very well and the game was well hosted,.

Clodiagh Gaels are away to Wexford intermediate champions, Oylgate Glenbrien on December 11.