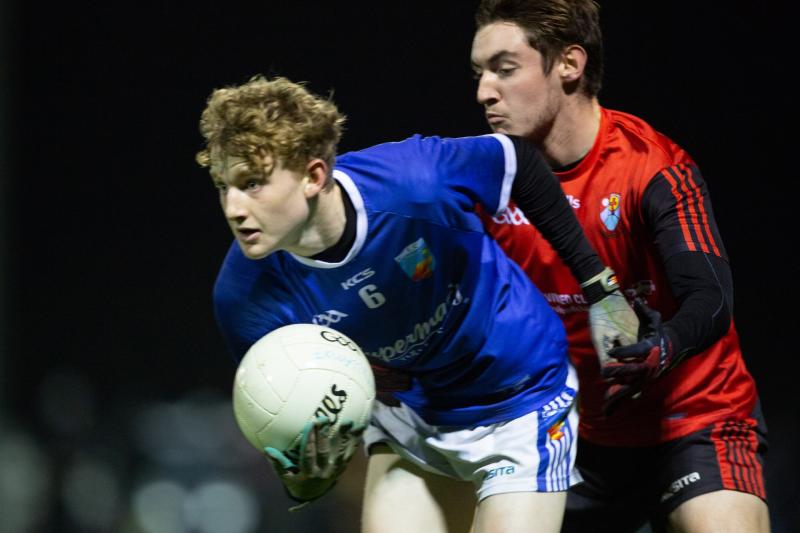 COLAISTE Choilm, Tullamore booked their place in the knockout stages of the Leinster Colleges Senior Football Championship with a very hard earned win over Moate Community School in O'Connor Park on Thursday afternoon.

It was a very good win for Colaiste Choilm and sends them through with a game to spare – they have a second group game against St Mel's of Longford but with two coming out of the three team group and St Mel's and Moate having drawn in the first round, they can't be denied.

Colaiste Choilm will be thrilled with their win but it was a quite flawed performance by them as they missed a lot in the first half while there was plenty of errors in the second half and they were turned over in possession far too often for comfort. However, the result was all that mattered here and for Colaiste Choilm, it represents a very satisfying return to top flight colleges football – their last appearance in the “A” championship was back in the 1990s.

This was a game where work rate and commitment was king and it went right down to the wire. Colaiste Choilm were marginally the better team and they had many of the best footballers on the field.

It was a solid display by Colaiste Choilm and they did just enough to win, getting ahead by five points, 2-6 to 1-4 at the second half water break and holding on for dear life for the win.

Colaiste Choilm have the makings of a very decent team and they have the capacity to improve considerably with games and training. They had a very strong midfield diamond here with centre half back, Cathal Ryan, midfielder Harry Plunkett and centre half forward, Dan Bourke doing very well for them. Killian Martin got through a lot of good work at midfield in the first half while Dara McDaid, who was brilliant in the first half before tiring in the second half, and the full back line of Ben Heffernan, Diarmuid Finneran and Ryan Conway also impressed – Niall Furlong had very good moments in the attack in the first half in particular.

Moate CS will be disappointed at the result and it leaves them hanging by a thread – they need Colaiste Choilm to beat St Mel's by three points to get through on scoring difference, though that is a possibility. They had a strong midfield pairing here in David O'Reilly and Tobby Conteh – O'Reilly was excellent for spells while Conteh caused a lot of problems for Tullamore when he got clear and powered forward. They got 1-3 of Moate's tally but their attack as a unit didn't make much headway and it is a tribute to the excellence of the Colaiste Choilm defence that only the losers' best forward, Ronan Murray scored from play.

Defensively Moate were good, most of their players got the better of their immediate opponents and it was very much a game for defenders.

The first half produced plenty of good football though both sides had some poor wides. With the wind on their back, Colaiste Choilm led by 0-4 to 0-2 at half time but really shoulder have been further ahead. Both sides had seven first half wides but the Tullamore school's chances were better whereas Moate CS's ones were more in the kick and hope variety.

Colasiste Choilm should have got a couple of goals – Sam Bourke hit the cross bar in the first minute while impressive wing back Daire McDaid was just wide with a chance in the 14th minute, forced off balance as he was striking. Moate had a great goal chance but Liam Maxwell blazed wide in the 29th minute.

Two Niall Furlong points, a free and a mark, had Colaiste Choilm two points to one up after nine minutes. Moate equalised through Ronan Murray before points from McDaid and Furlong gave Colaiste Choilm that interval lead.

The second half sprung to life with two goals in a minute in the 34th minute. After Harry Plunkett (free) and Tubber's Eoin Murphy (free) swopped points, corner back Ben Heffernan got the first goal. You wouldn;'t have backed much on a corner back finishing with the efficiency that the Tullamore man did but he made no mistake after Robbie Gallagher's pass.

A 1-5 to 0-3 lead was a big one in this type of game but Moate struck back immediately with Conteh powering through the centre and blasting a fierce shot to the roof of the net, via the underside of the crossbar. David O'Reilly's free brought it back to a point but Colaiste Choilm responded superbly.

Harry Plunkett got a fine free and then had a bad miss from one before Luke Bourke got their all important second goal after Robbie Gallagher did well to break the ball into his path. A 2-6 to 1-4 lead looked like it would be more than enough but Colaiste Choilm made way too many mistakes in the closing quarter, losing hard won possession and carrying the ball into a forest of players.

Moate CS were also guilty of this but they crept back into it. Liam Maxwell (free) and Ronan Murray pointed before Plunkett's 55th minute free made it a four point game again. Maxwell (free) and Conteh brought it down to two points and the final whistle came as a sweet relief to the Tullamore students.

Cathal Ryan (Colaiste Choilm): A number of contenders on both sides. Cathal Ryan, Diare McDaid, Harry Plunkett and Dan Bourke were all stand out players for Colaiste Choilm while David O'Reilly and Tobby Conteh excelled for Moate. The choice is Cathal Ryan, who just pips Harry Plunkett. Ryan was rock solid at centre half back and rarely made errors or got caught in possession, which distinguished him from the other contenders,

Darren Bracken had a solid game and was consistent in the way he applied the rules. He was very strict on over carrying and a couple of these calls looked harsh but he was very consistent. He played just over a minute injury time at the end and Moate's complaints at this were justified as there could have been another bit added on.

It was great to see Colaiste Choilm back competing in top flight senior football for the first time since the early 1990s. Fantastic work has taken place in the school in recent years and a number of the Offaly All-Ireland U-20 winning panel went to Colaiste Choilm, winning Leinster colleges senior “B” medals last year. It is very good for Offaly GAA to have schools competing in top level competitions, even better to see them holding their own and it is particularly crucial in football to have Colaiste Choilm here as they have a good few clubs feeding into them.

The O'Connor Park pitch was in remarkably good condition considering the time of year. There was a nice crowd of students and supporters at the game. The Colaiste Choilm team had three starting players wearing different colour togs, a sub came on wearing a green one and hopefully this will be sorted out for their next game as presentation is important.