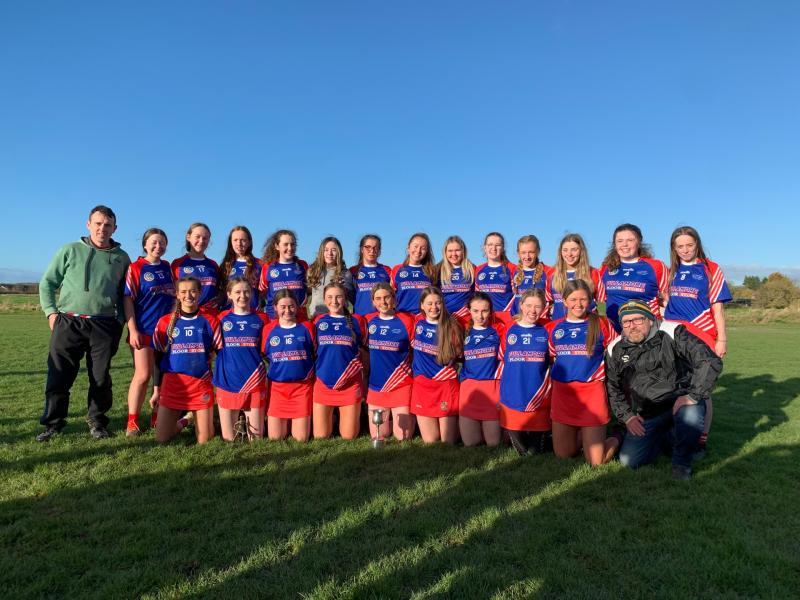 A bright but chilly Dr Kelly’s Field in Tullamore was the setting for the long awaited Minor B Final on Saturday between St Cillian's and Lusmagh/Drumcullen.  Once referee Simon Whelehan got the game underway Lusmagh/Drumcullen got a dream start when Clodagh Leahy fired the ball to the back of the St Cillian’s net.

Soon after Sarah Freeman opened St Cillians account when she converted a 45 but Lusmagh/Drumcullen managed to dominate after this and Labhaoise Glynn hit over an excellent point before Clodagh Leahy helped herself two a brace of points, one coming from a free to leave her side leading 1-3 to 0-1 at the water break.

When play resumed Sarah Freeman pointed for St Cillians to reduce the arrears.  Lusmagh/Drumculle then introduced Fianait Dooley who has played impressively all year for club and county and no sooner had she come on when she helped herself to a point.  Clodagh Leahy pointed from a placed ball before substitute Dooley added another.  Leahy was unlucky not to score shortly afterwards but her shot came off the upright but Dooley was on hand to convert the rebound and Lusmagh/Drumcullen were opening up a healthy lead.

Aoife O’Donovan managed to hit over a point for her team but Clodagh Leahy soon replied in kind for Lusmagh/Drumcullen. The last action of the half did give St Cillians a lifeline however when Kate Hogan drove the ball past Ellen Gleeson to leave the half time score reading 1-8 to 1-3 and while Lusmagh/Drumcullen had played so well during the first half, that late goal would have left St Cillian's going for their half time team talk with a sense of all was not lost.

When the second half started, Lusmagh/Drumcullen were in no mood to give their opponents any chance to gain any momentum and added two points to their tally before the water break and continued again after the break with Leahy converting two frees.  While Roisin Pinches managed to hit a point for her team any chance they might have had of getting back into the game was soon killed off when Fianait Dooley drove the ball into the St Cillian's net.

Clodagh Leahy then pointed before Jenny Bracken added the icing on the Lusmagh/Drumcullen cake when she rifled the ball past Caoimhe Rice for her team’s third goal.  Sarah Freeman added a consolation point from a free for St Cillians but when Simon Whelehan blew the final whistle the final scoreline was academic as Lusmagh/Drumcullen were convincing winners and rounded off what has been an excellent year for them as they added the Minor B cup to the five other titles they have won this year.

Afterwards Lusmagh/Drumcullen’s Creagh Lyons was awarded Player of the Match before Robbie Bergin, Chair of Offaly Camogie presented the cup to the victor’s joint captains, Roise McGarry and Clodagh Leahy.