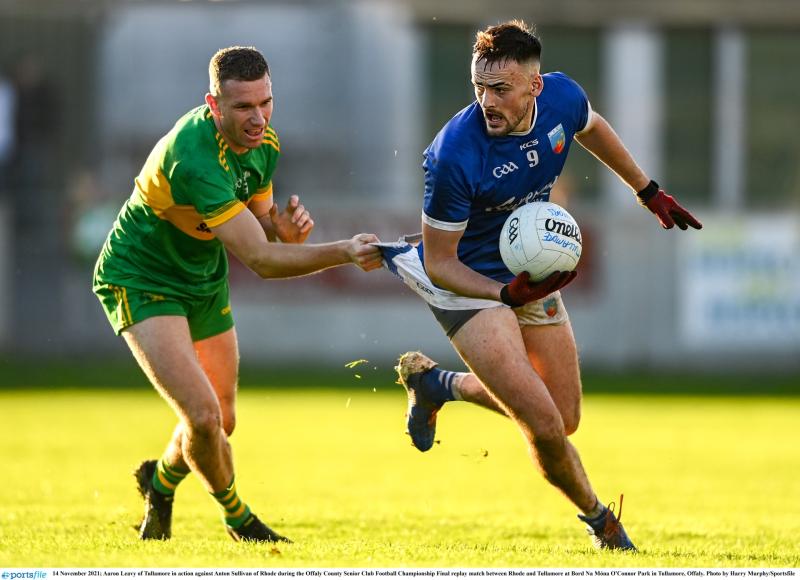 Aaron Leavy trying to get by Anton Sullivan

Offaly county midfielder Aaron Leavy is one of several Tullamore players that will be in the eye of the dual-player storm this coming weekend, preparing to play hurling on Saturday and football on Sunday with the newly crowned county senior football champions.

However while those in administrative and management roles in the club will be doing all in their power to get the Senior “B” hurling final delayed, Leavy will be quite happy to take the chance to get back out onto the field, and keep the good feeling going.

“I’m feeling good now, but if I think about it I’ll end up feeling sore!” he said after Sunday’s win.

“If I go just one week to the next I find it helps. It’s great doing both because if you are doing badly in one then you can go to the other and focus on that. You can find a bit of form and be grand in the other sport.

“We are managing it well in fairness. The managers have real good lines of communication. The lads aren’t getting flogged by either. If there’s too much work on either side lads end up getting injured. Tullamore is a dual club so it has to be managed anyway. I’m grand and happy to go next week.

While Leavy has made quite an impression at both club and county level, somewhat surprisingly, Sunday’s win was a significant breakthrough on a personal level.

“That’s the first county medal I’ve ever won, I’m delighted with that to be honest. It’s been a long time coming for lads my age. The lads younger than us really gave us a great boost. John Furlong and these lads. We have a great mix of youth and experience. I feel really blessed that we did it today. It all came together for us. It’s great to do it against a great team like Rhode who have been there for the past 10,20 years. It’s an honour to share a pitch with some of these lads.”

“We did feel that we left it behind us (a fortnight ago) but we also felt that we had Rhode’s number in a way. We thought our ceiling was a good bit higher than the way we played.

“We learned a lot from last year. That was a hard one to take because we didn’t turn up on the day, the two-point margin flattered us really. The younger lads coming in really gave us a boost and they were used to winning. At the start of the year we said we’ve come just short but it’s there for us if we put in the work”.

Leavy won’t be the only Tullamore player getting his hands on a medal for the first time in 2021, and he said it’s a great time to be involved in the club, with everyone surfing on a wave of success.

“There is a serious knock on effect. One team wins at underage and next thing another team wins, then the ladies win at camogie and football. Everyone is bouncing off each other and there is great buzz in training. The club is really on a high and long may it last.”