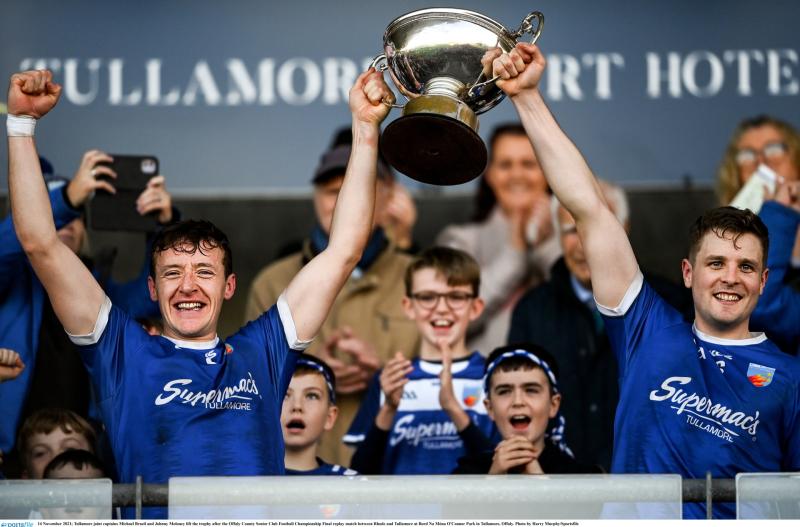 Across Offaly, the general feeling after the drawn county final between Rhode and Tullamore was that the Blues had let it slip. Five points up, a man up, and with the wind at their backs, they had every advantage and still failed to close things out.

Within the Tullamore club, there was a lot more variation on that line of thought. While some argued that chances like that have to be taken against a team of Rhode’s calibre, others felt that there was a lot that Tullamore could and would learn from playing in each county final.

Joint captain Michael Brazil said that he felt all these emotions and more as he reflected on the 1-8 each draw on Halloween Sunday.

“The last day did feel like a loss, we licked our wounds and felt a bit sorry for ourselves. The U-20s had a great win and that lifted the spirit again. We got back going and thankfully got over the line today”.

Brazil conceded however that as the number of missed chances grew, the memory of letting Rhode come back was fresh in the mind.

“We probably had a few chances we should have converted in the first half. I kicked two brutal balls wide, Johnny missed a free or two which is unusual, but it was a nervous first half. We controlled a lot of the ball but didn’t make it count on the board. We said at half time that we need to go at them again. Thankfully they weren’t converting at the other end.

“I don’t know if we got it tactically wrong, or naivety and nervousness caused us to snap back in to our shells for the last 15 the last day. Rhode are the best team in Offaly for the last decade for that reason, they punish you when they get the chance. We are probably not the best team in the world at managing the game but we just needed to stay going at it and stay attacking while not losing our shape.”

The midfielder cited big day experience as a key factor in the evolution of this Tullamore group.

“We played one county final in 10 years and then we play three in less than a year. It probably is an experience thing. Rhode know how to win championships and although the last day was disappointing, we took huge benefits from it. We knew we could go at them and hurt them, today we just couldn’t let ourselves sit back and go into our shell.”

If Tullamore continue to rack up trophies with the relentlessness that they’ve shown in 2021, it will be other clubs who will find themselves retreating into their shell when they go to take on the Blues. Brazil pointed out that the culture of success has really embedded itself in the club and the town this summer.

“We started off ok and won the league, I’ve never won the league before in Offaly. We blooded a lot of players in the league which I think stood to us. The juniors won as well, a lot of them players played a lot of the league. There were games during the year which we felt we should have won but didn’t. We had two draws in the group but we topped the group. We have a guy helping out this year, Lenny (Gareth Lenihan), I’ll give him a shoutout. We haven’t lost a game since he’s come in!”

So can it continue?

“It was something we were disappointed with, when we won in 2013 we felt that we didn’t show up at all against Newtown Blues that day. We felt we had a good solid team and that we should have done better. Still to this day it’s something I think about that we didn’t perform that day. We will enjoy tonight and enjoy tomorrow and look to the weekend then” he concluded.

Hogan plays heroic role as Tullamore return to the summit